There is a thin line between marketing and art. Both disciplines have the urge to amplify ideas and create mythmaking. The Swedish brand of vodka Absolut has blurred these lines since the 1980s. Today we can denominate Absolut’s bottle “iconic” due to the effort the brand put into amplifying this object. In 1986 Andy Warhol contacted Absolut to do something with the bottle. The idea spread like gunpowder, Warhol himself recommended an artist who then again suggested another artist to depict their interpretation of the Absolut bottle. It went on like that. With artists such as Andy Warhol, Keith Haring, Ettore Sottsass or Helmut Newton onboard, it seemed inevitable that the initiative would emerge in an attractive fashion. Thus through the years the brand has acquired a unique collection of artworks, today known as Absolut Art Collection (AAC). The bottle, that is the thing the artworks in AAC have in common – 850 artworks in all, to be more precise, created by 550 artists between 1986 and 2004. The Museum of Spirits AKA Spritmuseum in Stockholm is the current owner of AAC.

Every year, the museum runs its summer exhibition, which focuses on this collection. Curator Mia Sundberg, walking through the archive of AAC, it dawned on her attention the fact that many of the artworks included an animal whether they will appear with more or less presence in the composition. That sparked the idea of Absolut Art Collection – The Wilder Side – the summer 2018 exhibition. A blue dog, a howling wolf, a snake-like body with human head, a dancing starfish. All these creatures have taken over the museum as their comfort habitat during summertime. The artists behind this funky jungle are of a large wingspan, including Louise Bourgeois, Ed Ruscha, Maurizio Cattelan, and George Rodrigue. Up to 40 different unique pieces complete the list of artists exhibited this year. 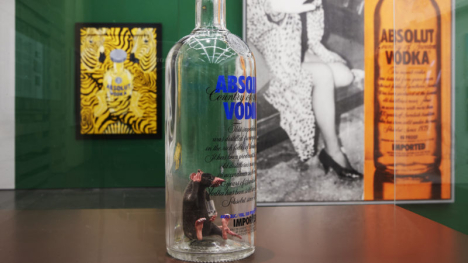 Storytelling and creating value are at the heart of branding but it is in the mythmaking “where both disciplines collide” – as marketer Greg Thomas explained. The renowned Swedish brand became part of French distiller beverage producer Pernord Ricard. Former producer and distributor of Absolut Vodka, V&S group (owned by the Swedish state), was acquired by the well-known French company in 2008. This led to the complex situation of whether the art patrimony of the brand might or might not be included in the acquisition. As a matter of fact, the case had to go to the Swedish court to be resolved: Absolut Art Collection stayed in Sweden. In 2008 it was given its new home at the Spritmuseum. Hence every summer the museum presents a selection of AAC’s artworks under a theme. Some of the most well-known art pieces in AAC feature animals, like the spider in Louise Bourgeois’ piece, Ed Ruscha’s howling wolf silhouette, Maurizio Cattelan’s hangover mouse, and George Rodrigue’s little blue dog. Some animals are center stage, whilst others just a mere detail, however always accompanied by the real star, the Absolut vodka bottle.

“Summer is the season when Stockholm is most vibrant and people come from all over the world to visit. It really is the season of the travelers from Sweden as well as from abroad. The Absolut Art Collection is famous but many visitors are amazed by the diversity and brilliance of the collection, surprised to learn that it is as extensive as it is, 850 artworks in all,” explains curator Mia Sundberg. We wanted to know a bit further how the idea of The Wilder Side began, “Each summer we choose a theme and make a selection of artworks based on that theme. The possibilities are immense. We have had a show based on the connections with art and the music world – some very famous rock bands started at art schools – and right now we are discussing photography as the theme for a new show. The collection includes plenty of photographic artworks, but that may still change. As new ideas come up all the time, the possibilities are endless! The idea of selecting animals as a theme came to me one day walking through the archive looking at all the pieces. There are so many images that include animals, everything from a tiny insect in the corner of an image to the central figure of a canvas,” Sundberg explained. 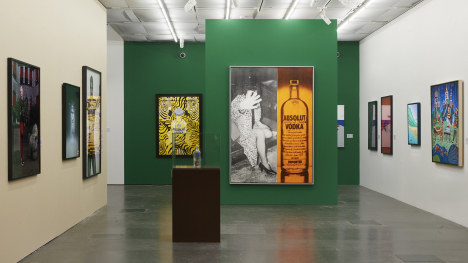 The exhibition space counts with a central room with the purpose of explaining what the AAC is about. There we can find the magnificent painting Andy Warhol did for the brand in 1986. The vibrant colors, the flow of Warhol’s stroke, such a pretty work and a unique occasion to enjoy this piece of art in front of you. In this way, The Wilder Side can be understood under the umbrella of AAC as a whole.

The Wilder Side acquires roughly 30 different unique pieces. There was a meticulous selection from the over 100 pieces depicting animals in AAC. “It was a kill your darlings process, there were so many great works that we could have selected. We always want to show how international the collection is, and reflect the huge diversity in techniques and forms of expression. Many different factors play in. For example, some got excluded because they had been shown recently so we said let’s go for something that has not been pulled out of the archive in the last couple of years.” And Sundberg continues, “The collection includes brilliant artworks by some very famous names, and I hope for the opportunity to work with them in single artist projects in the future. In the winter season we produce one-person shows with the artists from our collection. I am now working with the British artist David Shrigley for the 2018 autumn exhibition.”