Right next to Aldgate East towards the Brick Lane you stumble upon Whitechapel Gallery. This is a magnificent building made of glazed terracotta blocks with a two-tower design distinctive style of the Art Nouveau. The two main doors to the Art Gallery go straight in at street level designed very much for the people – in fact, it is free access to the Gallery. An exhibition of Picasso’s iconic masterpiece Guernica sets the Gallery’s start off back in 1938. Since then, Whitechapel Gallery has achieved a voice in London’s cultural landscape. We visited the Gallery to attend last days of German photographer Thomas Ruff’s exhibit Photographs 1979 – 2017. For decades, he have investigated the status of the image in contemporary culture. The exhibit counted with portraits reproduced on a huge scale, 3D images of Mars, constellations, and newspaper archives from the era of the space race and Hollywood starlets.

Ruff has exhibited in some of the most important museums of contemporary art around the globe. Tate Modern defined him as “a master of edited and reimagined images.” At the time of this exhibit a focused selection of Ruff’s acclaimed, monumental portraits of the late 1980s went on display as an intervention at the National Portrait Gallery. This exhibition has meant the artist’s first major London retrospective, and included a number of his most recent works.

The exhibit took place at both floors od the Gallery begging in the ground level with the series of small photographs of Ruff’s L’Empereur (1982), a sequence of eight images which depicts the artist in a range of exaggerated slumped poses with two chairs and a yellow floor lamp. 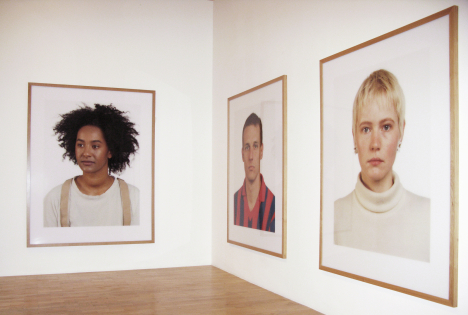 Continuing in the ground level towards the main room, there were his Porträts (Portraits) (1986–91; 1998–) a series of portraits yet passport-style detached from any kind of information such as name and location but just each image on its own. The images were reproduced on a huge scale. Someone could say printing them huge scale is the photographer’s eye candy, his recourse to grab the attention of the viewer more easily – relaying the main expression of his art on the format rather than the content, so to speak. However, Ruff’s style – using light in such fashion to convey soft skin tones, the blank expressions and the flat hues from his color palette against clean pale off-white backgrounds – provides a somewhat honest and neutral approach to the viewer. Most probably, his artistic approach is very much influenced by the German New Objectivity movement. Nevertheless, the format 210 × 165 cm helped to amplify that feeling inside the room. 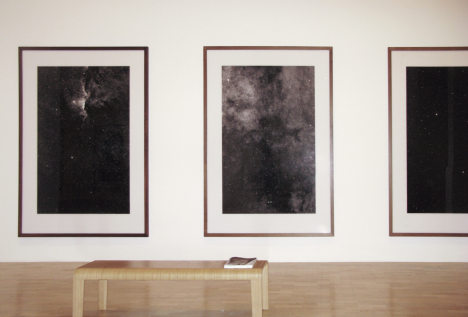 Right in front those two walls were displayed alongside Sterne (Stars) (1989–92), photographs taken by a high-performance telescope at the European Southern Observatory.

The artist focuses on areas of the sky where the balance of darkness and light creates a monochrome composition. Each work draws its title from the ESO’s celestial grid reference.
Right along two additional series Maschinen (Machines) (2003–) and m.a.r.s. (2010–) in 3D. The Gallery provided the old school red and blue 3D glasses to experience the series. It is gratifying Ruff wanted to add the 3D experience in combination with glimpses of Mars.

The show continues with one of the artist’s earliest series Interieurs (Interiors) (1979–83), which documents inside rooms from houses of his friends and acquaintances in Dusseldorf. These images are a series of small photographs. Again, there is that sense of reality, a somewhat raw feeling, it feels like the images could be Polaroid instants taken home when we were kids thus provoking a sense of nostalgia.