In Shinjuku, Tokyo, a rather extraordinary building has appeared. Located not a great distance from Waseda and Ushigome Yanagicho stations, on a street full of the rather typical buildings you can see in any part of this great city, stands one building which shouts out that it is something more than typical. Where most buildings look quite ‘busy’ with various windows, balconies and other exterior cladding, this building presents sheer white walls and large continuous windows. Its simplicity is understated, yet all the more interesting for being so. In an area famous for its hustle and bustle this one building presents an exterior which represents the opposite. When you discover this building then you have indeed found the Yayoi Kusama Museum. It opened in October 2017 with an inaugural exhibition of this outstanding artist’s latest work. 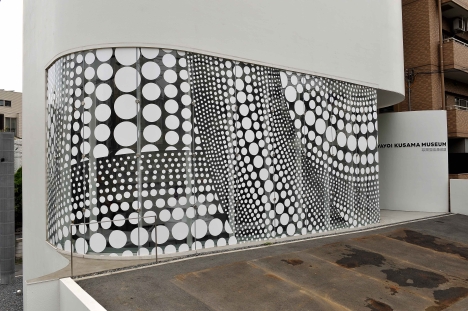 Born in 1929 in Matsumoto City, Nagano, an early example of her artistic inclinations was a picture of a lady in a kimono which was covered in spots. Also around that time she described vivid hallucinations, such as patterns that came to life in front of her very eyes. 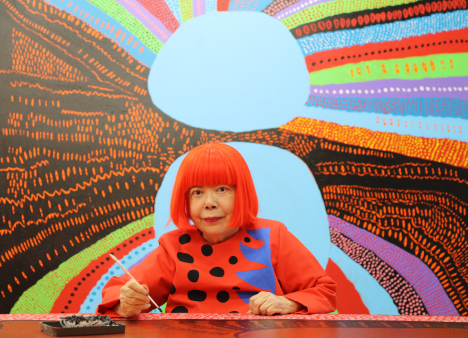 After World War Two she studied Nihonga painting at the Kyoto Municipal School of Arts and Crafts, before moving to the US in 1957. By the early 60s she was an established avant-garde artist, she worked most of the time in New York City until 1973. Since then she has lived in Shinjuku where she has continued to work on her art. She was named as one of the world’s most popular artists in 2014 and received Japan’s Order of Culture in 2016.

With the opening of the museum in her name she released a message that it is the greatest inspiration of her entire life and that; There is no greater pleasure than having everybody see and feel my philosophy towards life manifested in the Yayoi Kusama Museum: all my love devoted to all beloved humans through a sincere, lifelong endeavor towards art. – Yayoi Kusama. Tokyo, 2017.