The “Exhibition of Award-winning Works” of the 20th Japan Media Arts Festival was held from Saturday, 16th September to Thursday 28th September 2017. For this 20th exhibition more than 150 artworks selected from 4,034 entries from 88 countries and regions around the world, were exhibited. 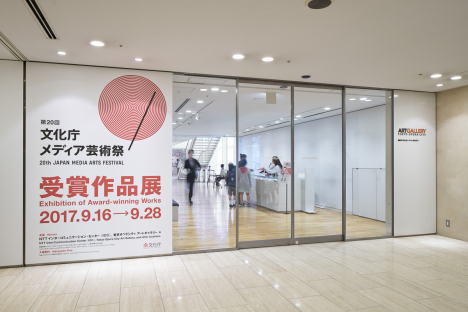 The exhibition took place at the Tokyo Opera City in Shinjuku, as well as other live performance and exhibition spaces such as TOHO Cinemas Shinjuku, Lumine Shinjuku, Sanagi Shinjuku, and NEWoMan Shinjuku. It included four categories, Art, Entertainment, Animation and Manga, gathering together many different kinds of artists and creators from around the world, and allowing exhibition visitors to experience media artworks that “reflect now.” Of particular interest were the artworks which won awards in this exhibition. 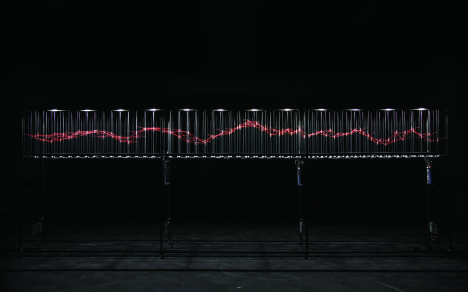 In the Art category, the grand prize was won by Ralf Baecker’s “Interface I.” This is a kinetic installation that visualizes the interaction of two different systems using 192 motors. Vertically hung strings are each pulled from both sides by a pair of motors like a tug of war, and at the same time these strings are interconnected horizontally by a web of red rubber bands. Geiger-Muller tubes in this work capture naturally occurring radiation, and noise-like random signals are passed on to the motors causing them to move spasmodically. It is an artwork that seems like it is a replica of a blood capillary, or a weaving machine. The intricate shape of the web of red string, which changes shape again and again within a black space, is an artwork which has a bizarre beauty of its own, and that seems to have its own active will like a living creature. 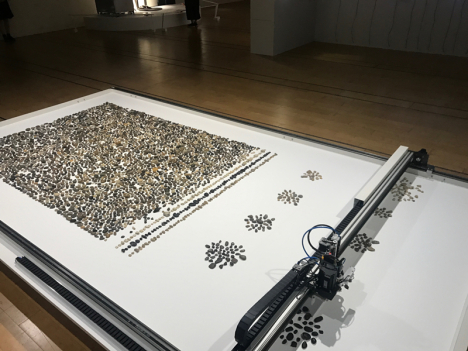 Also in the Art category, the Excellence Award went to an installation called “Jller” by German Benjamin Maus, and Czech Prokop Bartonicek. It is a collection of about 7,000 pebbles from the German river Jller that, via a robotic arm with an industrial vacuum gripper that uses image recognition technology, has sorted the pebbles according to their geologic age. After that they have been further sorted by age and type. The robotic arm, which doggedly classifies the pebbles while making an inorganic mechanical sound, makes this artwork look quite serene, and really quite beautiful and lovely.