It’s nothing new for Hugo Arcier to deliver art that combines chimerical motion imagery with elements of cutting edge technology. One might even say it’s become one of Arcier’s creative pillars to push the conceptual boundaries of art by subtly integrating social commentary with kinetic 3D visuals. That alone may have been the reason he was awarded the prestigious Chevalier de l’ordre des Arts et des Lettres from France’s Ministry of Arts & Culture, which acknowledges significant contributions to the field of art. Or perhaps it was for the propagation of his N°130 Creative Studio which derived from his desire to cultivate a space for artists and cultural institutions to produce inventive audio-visual experiences. Although we can’t say for certain which of his tactics brought him to the attention of French Minister of Culture Audrey Azoulay, we can say in certainty that acclaim will not stop there — especially as Arcier’s digital reimagination of Eric Sadin’s novel Softlove hits the road.

Softlove is centered around the theme of human dependency on artificial intelligence, relaying a day in the life of a woman through the perspective of her all too often relied upon ‘digital assistant’ — or as some of us may more aptly call them, Google, “Siri”, or even “Alexa.” 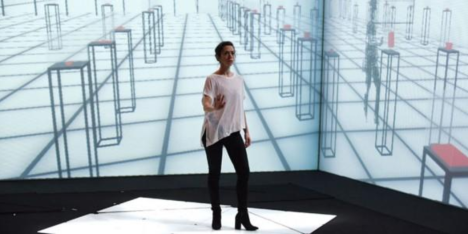 With an increased dependence on such devices, we’ve grown accustomed to informing them of our lifestyle habits, preferences, and desires for the sole purpose of trying to make our lives easier. Softlove poignantly reminds us that in doing such we’re complicit in allowing technology to take over the most intimate facets of our lives — one algorithm at a time. To that end, who, or what, is really calling the shots when the lines between our cognizant, physical selves, and our digital personas are blurred?

At the request of Caen theater company Le Clair Obscur, Arcier’s Softlove videos and 3-D work has been redesigned to — somewhat ironically, bring the piece into the real world, moving the story from text, to small screen, and finally to various museums throughout France. The resulting multi-sensory exhibition, which was activated as a series of live performances, premiered in Caen, and continued its travels through Bron at the Biennale des arts numérique and to Issy-Les-Moulineaux at Le Cube. As he rounds out his tour this Winter, additional opportunities to catch Arcier’s live adaptation will be held during the the Némo Biennale internationale des arts numériques in Paris at the Maison des Arts de Créteil on December 21, 2017, with prelusive installation versions of the show on display from December 5th – 14th. Be sure to save the date and book your experience for one of the three live showings!