Taro Izumi explained why he chose “night lie” as the title of his exhibition. “It was last December in Paris, while I was on the banks of the Seine in the middle of the night, that I realized that in order to apprehend a video, it was better to do it at night. (…) The video makes itself possible to catch the existence of some ‘things’ similar to the appearance of stars visible only in the dark. The more the city and the urban landscape (symbols of reality) are close to the stars that melt into the night, the more brilliant the stars are (stars which do not seem real but certainly exist or existed in the past.) It is by being aware of this distance that I create through video. We may say that the distinction between the background and the main subject becomes blurred and reversed. (…)” (Quotation from the leaflet of the exhibition) 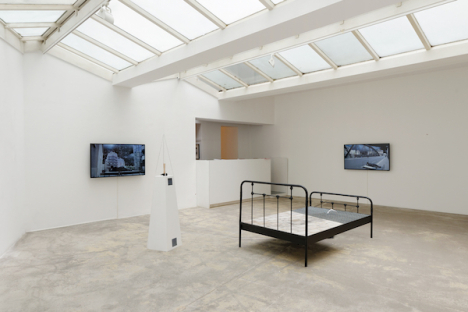 “Night lie” has taken place at George Philippe & Nathalie Vallois Gallery, where the white cube is well-lit with natural light coming through its huge skylight. When the spectators enter into the exhibition, at first they will see a bed. The surface of the bed looks like a Paris street covered by grating and granite pavement. Four screens surrounding this bed show real urban landscape of Paris in daytime. Those scenes are, however, seen as an animation movie where the sky is the setting for the the woman model painted in black. We may get puzzled/confused about which object we should focus on – Is it the nude model ? Is it her skin represents on the background ? Izumi painted the model in black and the model itself would has been considered as an object in history of art. 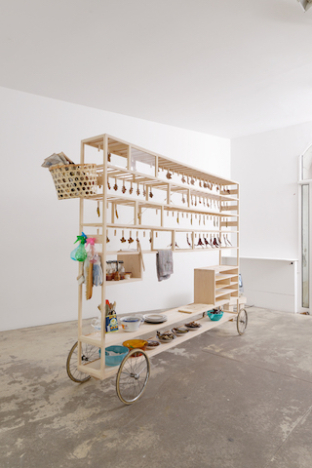 Puiser un nerf de rivière (Draw a nerve of river） is an installation composed of a wooden stand having an Asian and kitsch ambiance next to a small television put on a chair. This stand has a display of dead leaves, which the spectators can immediately find that they are imitated ones made by paper. The video on the television shows a scene of actors make those leaves and put them on the street. Fake leaves seem to be real, except that they don’t live. The camera doesn’t hesitate to catch the back side of paper leaves. Artiste wants to create a question : What is the main idea of this video, fake or real leaves? 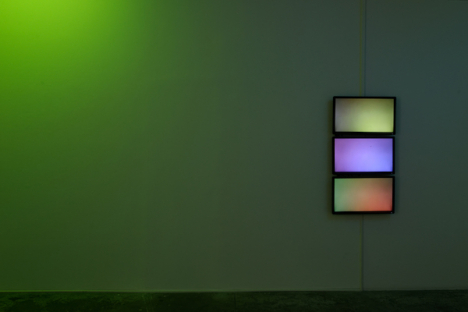 In another room, three cameras inserted to the tripods hanged from the ceiling. Three screens show images of each camera that films different part of the wall lighted by three different colors. Wall is normally seen as a partition and has been never considered as a objet. Even in contemporary art, we ignore white walls which sort it out. By looking at a thing from another perspective, the relation between the background and the main subject could be reversed.

Other videos are projected at the same room: Paris trash can is used as a drum to make fire bugs jump in and the image show them copulate by strolling together. The presence of which we aren’t aware comes again in here.

How the world perceives “Reality” can be influenced by different factors. You capture your world by filtering your own lens. Therefore, the reciprocal relation between the background and the object is vague, the daytime could be undercover of the night. Taro Izumi presents things and phenomenon which we miss out in Paris.