At Ichihara Lakeside Museum in Chiba, Japan, the “Carsten Nicolai: Parallax” has been held from March 18th. This is the largest exhibition in Japan after about a 15-years interval and exhibits 6 projects including works which haven’t been shown in Japan yet, in the unique space of the Ichihara Lakeside Museum. The title “Parallax” means “the way an object’s position or direction seems to change depending on viewing angle.”

Carsten Nicolai was born in the former East Germany in 1965 and works in Berlin now. He has been exhibited internationally since the 90s, such as Documenta and Venice Biennale. He created artworks under the theme of human perception, visualization of sounds, and natural phenomena and he is one of the representative comtemporary artists. For a work in Japan, the LED vision at the entrance of SEIBU SHIBUYA might be fresh in our minds. Also, he’s a famous noise musician as Alva Noto. 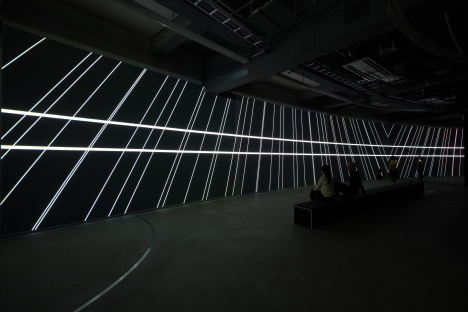 There is a 18-meters long project screen “Unidisplay” near the entrance. On the screen, 24 modules of images are projected randomly.

Because of so many visual effects of illusion and afterimage, there are scenes where the speedy transition of the images make viewers feel dizzy or confuse by the fast movements and pauses. Looking from the bench, your body can feel an irregular vibration which you cannot experience if you stand. This space might integrate you within it since the mirrors on both sides make the image infinite.

A short film “Future Past Perfect Part 4 (Stratus)” is a work that the images of clouds taken from the airplane are collaged and played with ambient sounds. This is a really fantastic and beautiful film even though it is a quiet work compared to other works because it is on a small screen. Even if there’s a TV show to play this film for 24 hours, it is still enjoyable. 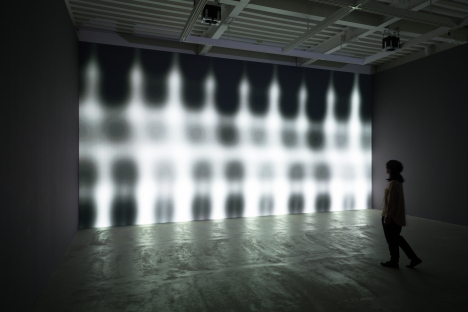 “Fades” is a video installation made under the theme of the movement and gradation of light. White light on the screen changes its shape and eventually disappears. It is like an alive creature. Unlike the sharp expression of “Unidisplay,” “Fades” includes dim and loose images with white noise. Although the theme “the movement of light” is scientific and complicated, we can interpret it by representing it as an abstract video. It makes us keenly realize that his expression is infinite. 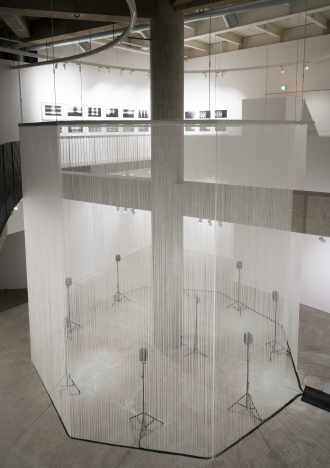 The sound installation “Particle Noise” using a stairwell space sends sounds of radiation, from 8 sound systems surrounding the central column, which receives signals from 2 Geiger counters. The frequency of the radiation changes the pitch and place of sounds. Each sound is very unique; it comes from the back and right from the side. It is impossible to expect when and where the sounds come and people can enjoy a strange tense atmosphere.

Each space is not completely separated. Therefore, sounds from each works leaks into one another in a good way and the comfortable mixture of the sounds is another attractive point of this exhibition. While there are not many works, it is meaningful to see each work for a long time. Also, it is oddly addictive, you can be nicely tricked by the exhibition “Carsten Nicolai: Parallax.” Forget time and enjoy the world of Carsten Nicolai.