Why did he invite Makito Takagi to the exhibition, who exhibited right next to the entrance? 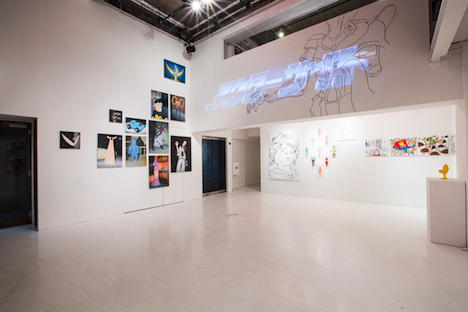 When did you meet Takagi?

Mizuno: It was 2 years ago, even though I knew of his works since few years ago (from around 2010). When I first saw his pieces, I felt frustrated since I drew like flash photography. Also, many artists from my generation are influenced by the West Coast modern art and he seemed to like that too. 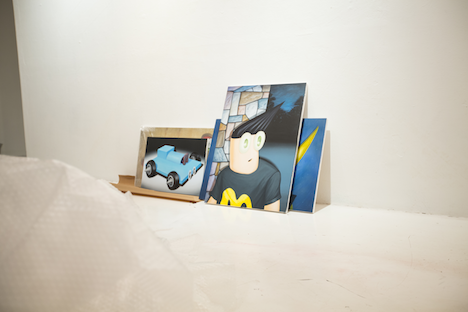 Please tell me the reason why you invited Takagi to this exhibition.

Mizuno: We, Outer Side, tends to be recognized as a group of illustrators who like to draw Japanese monsters and mysterious characters. But, they are just a medium and a decoy to get attention from viewers. What we want to express is on the other dimension and this is a way to have that. I invited Takagi to clarify that further. By the way, I don’t hate the term “superman” (Chojin in Japanese). It also might relate to the generation.

As they took the identity over from the last exhibition, by inviting a new member, they could more emphasize the concept. When did Takagi start to work on the flash photography style? 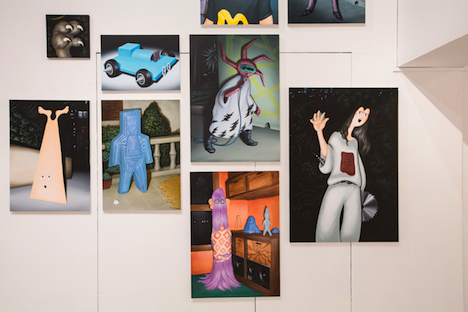 As Mizuno mentioned, your pieces include much expression of light. Tell me how you started to use the expression of flash photography.

Takagi: I was raised with a Japanese boom of anime characters such as Pokémon and Digimon. Since I was little, I’ve liked to draw and as I copied those characters, I created my own characters too. This experience served as a base for my current expression of characters. I’m a contrary person so, I like to draw hidden features to my characters.
Meanwhile, I’ve been familiarizing myself to occultic unidentified creatures like UFO, aliens, Nessie, Yeti, and Japanese monsters. My paintings are really influenced by exquisite conflict between reality and fiction of photography which took them. In order to express such a world, I tried many styles of painting. I did a posters of a minor monster films. But among them, a painting style which used electronic flash suited me. I felt that capturing a moment of flash could be a foothold of expressing the world which I pursued.

I heard that you have studied many expression beside the flash photography style.

Takagi: Asian movie posters like a house paint picture and colors on the package of western snacks are helpful for me because they are really honest for desire and induce consumers well to buy them. As for the lighting, I often check the posters. Also, if shadows are hard to express, I actually take a photo of a simple object and observe how the shadows spread out.