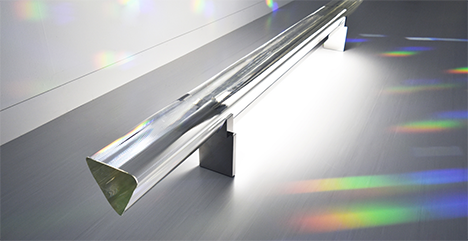 Please tell us about the new work “Water Block – KATANA”.

Some pieces of “Water Block” (2002) were collected in Musée d’Orsay, Paris for the renovation project of the Impressionist gallery, and they have been permanently exhibited with masterpieces of Mannet, Degas, Monet, Cézanne and Renoir.

“Water Block – KATANA” is an evolution of “Water Block”. This glass is made with a traditional Japanese technique and a platinum mold, which indicates ripples on the surface of water. The solid glass with a triangular section expresses the beauty in nature. It becomes a transparent dynamic form as if sculpted from a mass of water.

As you mentioned earlier about the Japanese view of nature, the installation “Tornado” which received an award as Designer of the Year 2007 at “Design Miami“, then has released it here and abroad, also inspired by natural phenomenon though it has different material, is it right?

Yes. So far, all works also express natural phenomena. “Tornado” is a work incorporating Miami’s natural perfection as an element of design. It is a space installation created by approximately 2 million transparent straws of natural phenomena such as large tornadoes and hurricanes which often occurs Miami. By using a transparent straw alone, I created a similar natural phenomenon like the particles of clouds, snow and fog overlapping each other ten thousand times. It turns white and enhances its depth. 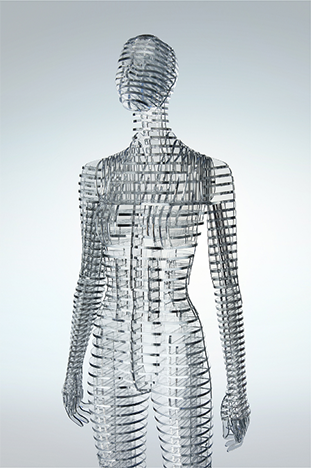 You created the installation of the human body at the “MIYAKE ISSEY EXHIBITION: The Work of Miyake Issey” at the National Art Center, Tokyo in 2016. What did you focus on when your works were put on fashion designed by Issey Miyake.

In the exhibit space expressing the beginnings of Miyake ‘s craft in the 1970’ s, expressed by the human body with “paper”, and in the space of the bodyworks with the theme of relationship with the human body which produced by Miyake in the 1980’s, I made the human body using “transparent acrylic resin” which symbolizes the future feeling. As if a piece of cloth of Miyake’s clothes, 365 parts created by cutting with a laser from a single plate composed of a grid structure and creates a futuristic human body.