Cherkaoui said that he became interested in the physicality of the monks and the instance where they release an explosion of energy that they have honed. The explosion of monks from the boxes after the silence is an expression of this explosive release of energy. The performance’s foundation is this repetition of stillness and motion. 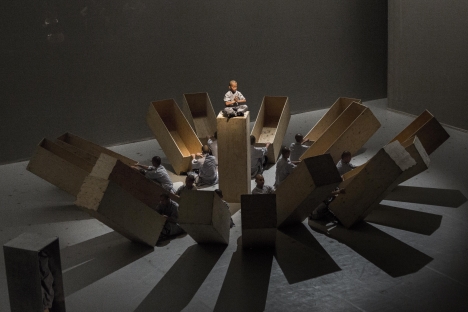 The idea for the boxes came from Antony Gormley. The boxes are used by Cherkaoui and the monks to express a variety of items, such as a fortress, a big lotus flower, living quarters, a sailboat, and a giant dormitory.

In the opening scene, the boxes are put together to represent a maze. This acts as the entrance for the audience into this work’s world. Many different images are associated with this labyrinth. 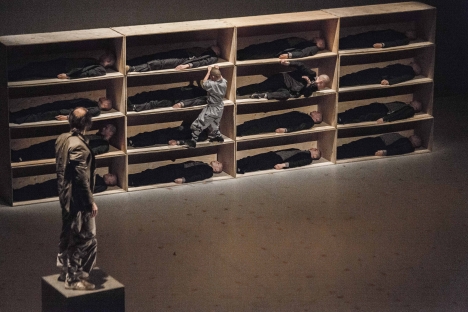 Cherkaoui said this about the show.

“I did not think about showing the standard image of Kung Fu.”
“All the movement in my work has an element of Shaolin Kung Fu.”
“Within this, I have added a new element and want to show that to the audience.”

In the beginning, I thought what I was seeing was Shaolin Kung Fu. By the end, after seeing the climax, it had transformed into something new entirely. I had fallen into the maze that Cherkaoui had set up in the beginning of the performance, and at the end, I was free and able to be fully absorbed into the world that Cherkaoui intended. By the hand of choreographer Cherkaoui, Shaolin Kung Fu is raised in “Sutra” to another level entirely as a true art form.