Photo collage made in London is exhibited in this show. It looks sparkling like a piece of jewelry and mosaic tile but if I see it closer I surprisingly found that the brown parts are photos of sediment. Colorful parts are crane truck and containers, right?

Photos for this collage are which I took from top of the construction site. I liked wandering the city on the upstair of London’s famous red double decker bus. I could see inside the constructions site over the fence on the route.

Soil was revealed and reinforcing bar and earthenware pipes were roughly lie d down. Crane truck with thin neck and machines were moving… The comparison of cool looking heavy machine and rough ground. I was gradually attracted by this kind of construction site. 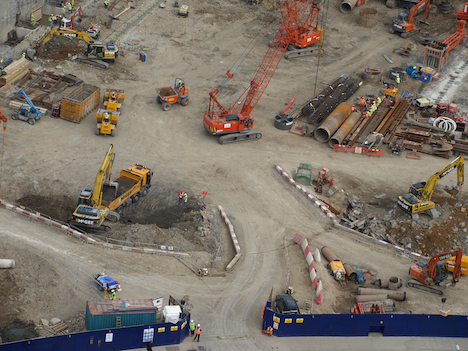 Since it was the route for the college, I could see the subtle change everyday. I could tell if the truck ran and the color of the ground changed, the hole became deeper, and new pillar stood. Especially site after the rain was hidden jam. Big pool mirroring blue sky was next to the lump of the soil. I took photo of those images from the roof top of the building, cut out and reconstructed. I “reconstructed” and pulled out attractiveness of the construction site which changes in a second. 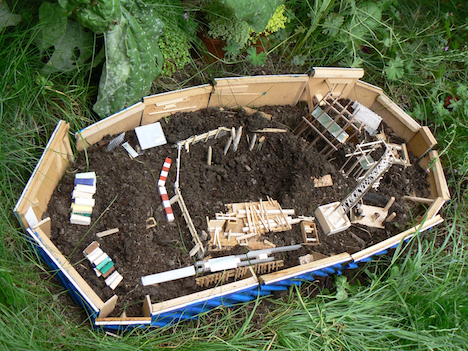 You are now drawing city scape with collected test writing from stationary shop. Why did you change media and technique?

Because I thought photo is a little weak as a media, I stopped the collage once. I used to put layers of photos on the paper but it was unstable compared to painting. Uneven surface was also my concern. It might be creator’s strong preference.

During thinking so the idea of using lines of test writing came up to me. Construction site is an aspect of the city, and I thought there must be some more other media in the city. I suffered thinking about how I can create the art with lines for a few years.