The art exhibition “Peripheral Thinking” at the National Museum of Modern and Contemporary Art, Seoul, introduces representative works by William Kentridge from the 1990s when his name started to be known in the world up to the present. He was born in 1955. A Caucasian from South Africa and is known as an artist who depicts social issues such as the Apartheid. He started his art career beside his acting and teaching art jobs. His main form of work is stop motion animation. He uses paper cutting and live action but if you see his drawings with charcoal or pastel you might be strongly impressed by its taste. 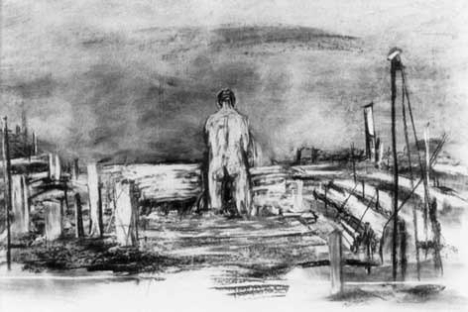 The first drawing piece was “Johannesburg, 2nd Greatest City after Paris”. Two middle-aged men, “Soho Eckstein” and “Felix Teitelbaum” who were created based on Kentridge’s dream appear here. They often star in his works but we cannot tell clearly about their character because the story itself is developed like a dream.

However it doesn’t mean it is just a vague expression; rather, it shows a direct message from a particular stance. The drawing gradually leads us to a dim, decadent and repressed world and makes us feel alone. We cannot take our eyes away from it. The potential of the drawing, the distinctive awkward movement of animation, words appearing in fragments and ever-changing scenes shake our emotions which are inexpressible in words. 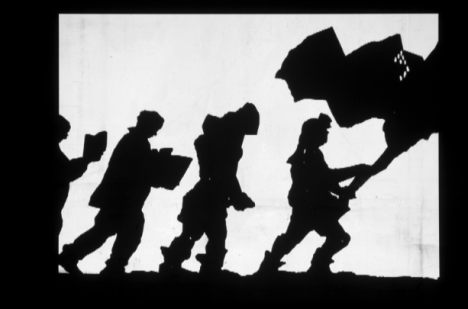 This exhibition has a few related works. One of those which firstly catch our eyes is “Shadow Procession”. The images are projected on the left side of the entrance wall. As the title shadows of people move from left to right, there is the sound of an accordion and a sexy husky male voice which overlap together and produce the marchers’ elation. We may find ourselves being in the line and lead to the room. 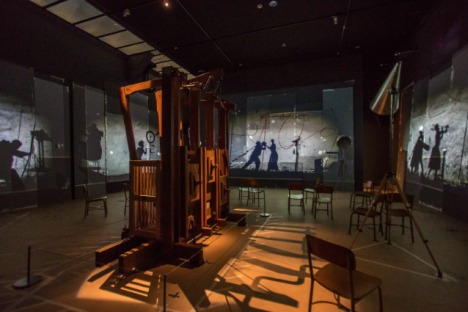 This space is divided into three rooms. One of the rooms has the entrance at the quiet place so that it is not to be found easily. Images are projected on the whole of the space which is filled with boxes for the works, big objects for the theater and some roughly set chairs. You might feel as if you are going astray at the backstage of a theater. Watching the images on the chair, you will forget where you are now. It is like you are daydreaming. This “The Refusal of Time” was presented at dOCUMENTA (13) and became famous. “Parasophia: Kyoto International Festival of Contemporary Culture” also introduced the elaborated and dense work at the pre event. 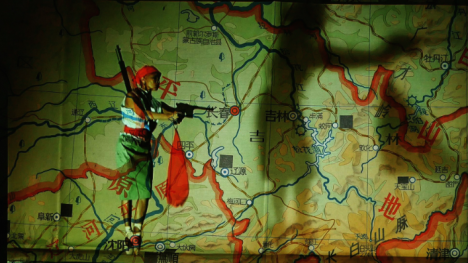 “Notes towards a model Opera” is a video work which is fast-moving with vigorous African beats. Words describing the dry land and the strength of living make the rising sound. These are different type of works but their expanse of image and development are fascinating and particularly impressive. Including the structure of the exhibition, Kentridge’s gimmick for involving people in the works is ingenious. His experience of theatre and as an actor before becoming an artist must be effectively working. 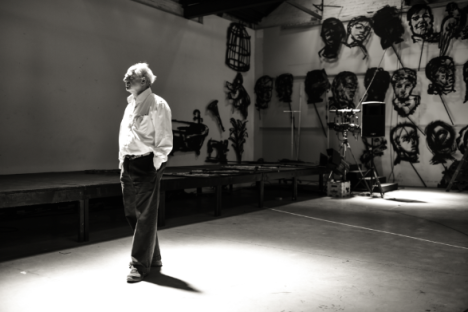 Some activists may feel impatient with him because he constructs relationships with the world whilst being away from direct activity. However the world is not built with visible things. His works seem to try approving how the unseen world is as important as the real world. Art plays a big role for showing it.

Kentridge became 60 years old but his sense never gets old. His recent works are rather freer and creates rich images. We can look forward to seeing how he develops his art further more.