Stephen Cheetham, a Bologna-based illustrator born in UK. Adorable characters drawn in pop colors well are appeared on his illustration. Those have jump over his personal works and been in a number of companies’ ad such as Google, British Airways, NIKE and UNIQLO. In addition to poster and flyer design of Hostess Club Weekender, a music events in Japan, he works for various projects, for example a movie of Mother’s Day and Father’s Day by Takashimaya Department Store. After moved in Bologna, he started to design interiors like wall papers as a pattern design studio “All The Fruits” with his girlfriend and his design field is spreading out more and more. Interviewed with him about the wellspring of his inspiration, who is interested in Japanese culture such as Pikachu and Geisha privately. 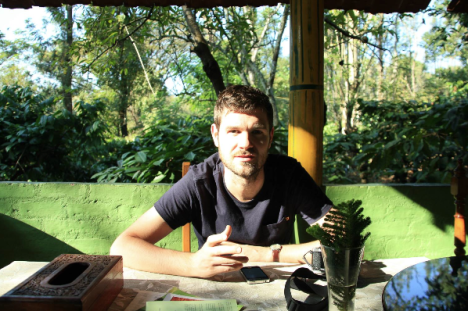 Please tell me about you and your works briefly.

Hi, my name is Stephen Cheetham. I’m an English-born illustrator, but currently living and working in Bologna, Italy with my girlfriend and “All The Fruits” partner in crime Jessica Pinotti. 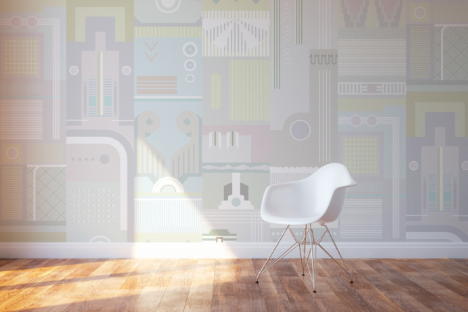 Cut & Paste ‘Miami’, All The Fruits

When were you keen on illustration?

I’ve always had a love for drawing I guess, from a young age right the way through school, but I only explored illustration as a means to make a living while living in London. 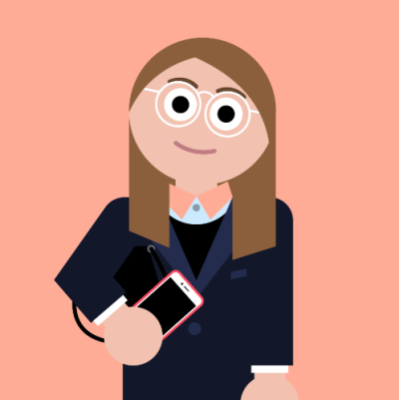 Please tell me your recent works and projects.

The most recent project I finished was for a mobile phone company called Orange. They asked me to create a variety of scenes based on their requirements, everything from a crowd at a gig to doctors in a hospital. I’m not exactly sure where they will all end up, but I’m sure I’ll find out soon. I’ve also just completed a few smaller editorial pieces of work…one for a national newspaper on environmentally friendly cars and another for an inflight magazine about the upcoming Toronto 2015 Pan Am Games. 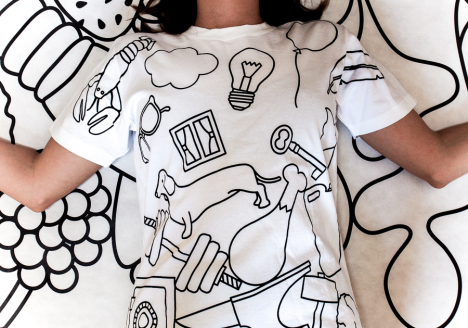 T by GASBOOK, All The Fruits

All really varied, which is one of the main reasons I love what I do! And of course earlier in the year I was working with guys at GAS AS INTERFACE on the Takashimaya Mother’s Day and Father’s Day campaign! Oh, and of course the T by GASBOOK designs as part of All The Fruits too…they were a lot of fun to create and seem to have had a really good response. 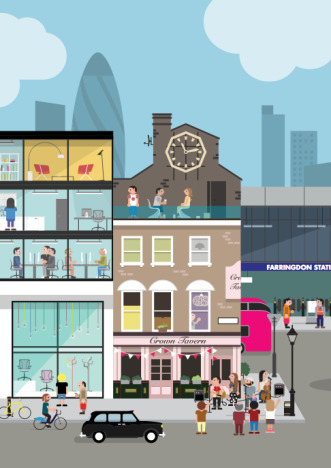 Please tell me the typical process to draw illustration. Do you always keep your ideas on some note by sketching or words?

When I receive a commission, I usually go straight to my computer and work directly into Illustrator, using a Wacom tablet. If I need to plan or think a little more about the layout etc I use a sketchbook, but this isn’t the case for most projects. I do have a sketchbook with me most of the time, but it’s general use is jotting down ideas now and again for personal work. 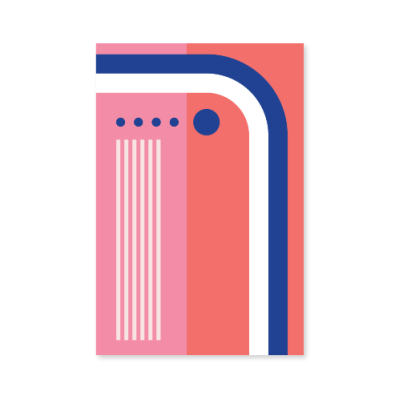 The Cresent print, All The Fruits

Since you started “All The Fruits”, you moved to Italy from UK. What do you feel the difference of the creative situations between both countries?

Well, I moved from London, so there is a large difference in terms of creative surroundings. London has a lot more choice in terms of galleries and creative events than Bologna. But in terms of countries and how their creative situations affect me, I guess I haven’t found much of a difference. I still work in the same way now as when I was in London, and my work opportunities haven’t changed at all, so in that respect there isn’t much difference. I guess that’s a benefit of working for yourself. All my work is computer generated, and my clients communicate via email or Skype most of the time so it doesn’t matter where my base is.

I feel your design for All The Fruits is slightly simple and clean than your own works. Do you have any different points to make patterns on wall from illustration works?

My work with All The Fruits is definitely different to my personal work. I think that comes from working with someone else, as a creative partnership. Both myself and Jessica bring different attributes to the end product, and working together has an effect on the end result.

A very good friend of mine started working at Hostess many moons ago, and got in touch when they started the Hostess Club Weekender events. I had already worked with her on flyers for her own music events when she was living in London, so she asked me to create a poster and characters for all the acts playing to promote the festival. It went down really well, and I’ve been working with them ever since! I have a lot of fun creating the characters, and it’s nice to work with a client on a long-term basis. A lot of my work is one-off things, so to have a client to work with year after year is a nice change. 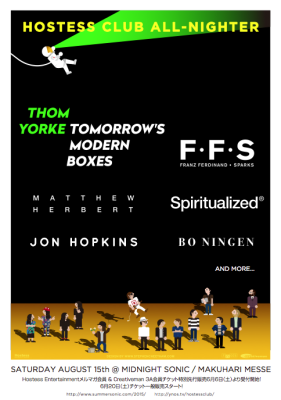 There are many kinds of the HCW poster designs. Which one is most impressive to design?

I get bored with my work quite quickly, so I guess my favourite poster design at the moment is the most recent one! I enjoyed leaving the Tokyo skyline theme behind and moving all the characters into space. 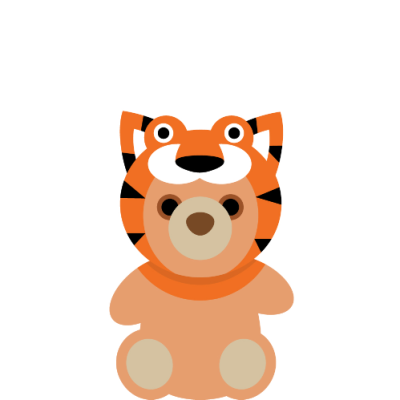 I saw your working place in some interview article and there are lots of CDs. Which musicians have influenced you?

Ooo, good question. I’m not sure if there’s a particular artist that has influenced me, but I do listen to a lot of music while I work. This doesn’t really answer the question, but I was heavily influenced by the artwork of Pete Fowler when I was a teenager. He created all the artwork for The Super Furry Animals, who I was a big fan of, and still am, so I guess in a way they had a bit influence on my work and style. 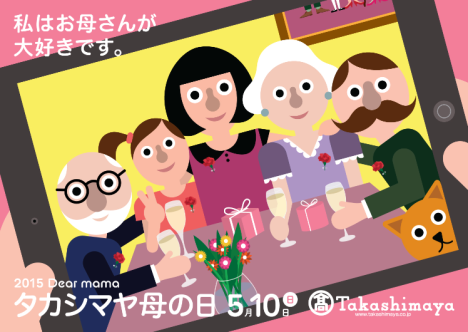 You have worked with mother’s and father’s day of Takashimaya. In your personal works, some characters often appear on your illustration. Have you been influenced by comics and cartoons?

Growing up I watched cartoons on TV, as most kids did I think, but I think my main influence was from toys. I played with a lot of Lego and Playmobil growing up, which had an effect on how I now put my characters together. 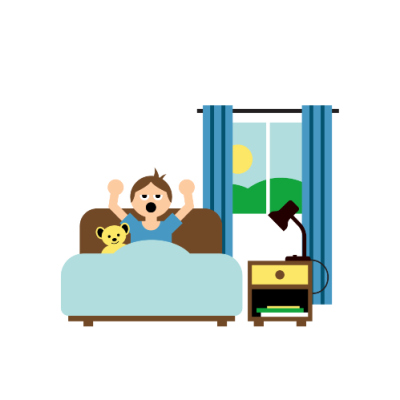 You seem to be interested in Japanese culture as drawing Pikachu and Geisha etc.
If you visit Japan, what do you want to do?

Oh, I want to do everything! I think that’s the reason I haven’t visited yet, although I’ve wanted to for a long time. I need a lot of time and a lot of money. I’d stay for at least a month, and see as much as I can but at the same time not rush around too much. Thinking about it now, maybe it’s better if I just move there for a year and see what happens. I’ll see what Jessica thinks!
Of course, the first stop when I get to Tokyo is the GAS AS INTERFACE offices to come and say hello! 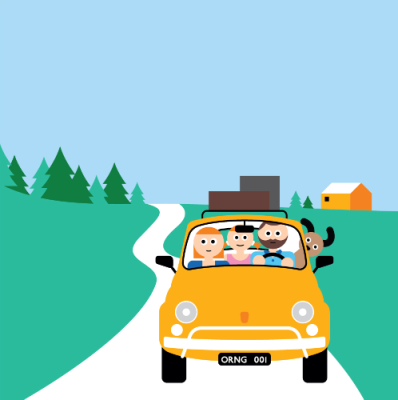 Do you have any upcoming projects?

I’ve got an exciting project with All The Fruits coming up, but I can’t reveal too much at this stage. There’s also a few personal projects that I’d like to work on, but right now I seem to be thinking more about summer holidays than work!