When you look at the artworks of Zhou Chunya, they let us wake up to the nature of things.

Zhou Chunya is an artist who was born in Chongqing, China in 1955. He graduated from the Sichuan Fine Arts Institute in 1982. Later he went to Germany and graduated from the University of Kassel in Germany in 1988. Currently he participates in local solo shows and various international exhibitions, while being based in Chengdu and Shanghai. His mayor works are the “Green Dogs series”, the “Peach Blossom series” and the “Rock series”. His new artwork “Yu Garden series” was on exhibition at the Art Museum of Nanjing University of the Arts in Nanjing from March 12th, 2013 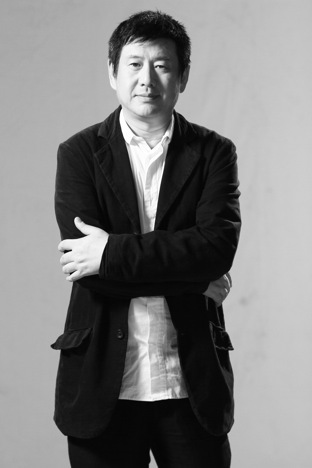 Tell us about your new series. Why did you choose “Yu Garden” as the theme this time? (Yu Garden is a garden that was constructed by a government officer of Sichuan at the end of the Ming Dynasty. In the the present day it’s one of the most famous sites in Shanghai.)

Yu Garden has a history that spans over 400 years. In previous times, a lot of political and economical events happened in Shanghai. All of those events took place in this Yu Garden (for example there was even a secret society called Small Swords Society which had its headquarters there during the Qing Dynasty.). I chose Yu Garden as my theme from a historic perspective. Besides, there’s a traditional Chinese garden in the Yu Garden area. It’s a place with both amplitude and complicity. 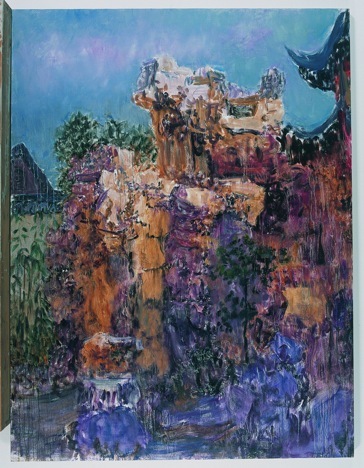 Although some of the Yu Garden series had been on exhibit previously in Shanghai, why was the whole exhibition held in Nanjing?

I wanted to interact with students. (The museum where the exhibition took place was located in the campus of the University of the Arts.) My artworks are influenced by the Chinese legendary artists such as Li Zai, Huang Gong-Wang and Li Shan. The artists of this important period in Chinese art history were all in Nanjing. I think of them often when I paint. Although they had already been long gone, their souls, thoughts and arts are still here. I interact with them through the exhibition in Nanjing. 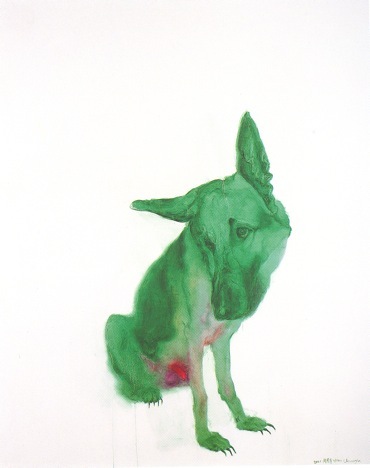 In fact, not many Chinese artists are known in Japan. When I became acquainted with your “Green Dogs series” a few years ago, I thought I would love to introduce you since your artwork was very impressive.

That’s true. I do think there’s too little cultural exchange between China and Japan. We need to interact and comprehend each other not in the aspect of politics, but also in regards of culture. Then, artists should consider problems among themselves. Artists are very peaceful and they think totally differently from politicians and politcs. Although I usually decline media interviews, I took it this time to let you all know that there are various artists with personality in China.

I’ve always liked Japan and been eager to visit, but the consulate rejected me a few years ago. They didn’t tell me why. It’s too bad that I haven’t participated that much in exhibitions in Japan. Please add that Zhou Chunya is keen to come to Japan. (laughter) 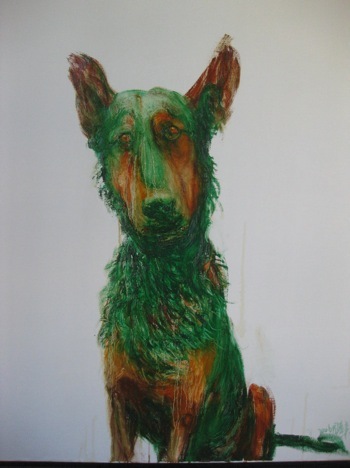 I think your artworks will be accepted by many people. I myself had a big shock by “Green Dogs series” because it was exactly what a “dog” is. It was the very sense of Xie Yi in eastern art.

“Green Dogs” is more strongly related to myself than to the “Yu Garden”. That is the dog I myself had owned. He’d died and become something spiritual. Why did I paint the dog with green? There was no specific intention for that. Dogs surely aren’t green in reality. Color is something that an artist imagines by himself.

Tell us more about your experience. What has impacted you and your life?

The biggest influence would be that I experienced the Cultural Revolution. I can comprehend how the situation was for both myself individually and as an artist. There wasn’t any freedom of creation for artists at that time. As a human, it was a tough time. That was one of my most precious experiences.

These are both important: the situation of society for the present arts and for the arts to be born. After the Cultural Revolution, we became able to create freely. We expressed our thoughts and focused on creation. The Chinese artists from the 80s to today have been trying hard. We could say that the Chinese artists have various experiences. 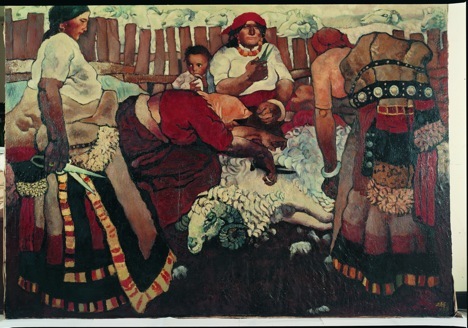 What influence did you have from the experience of studying abroad in Germany from 1986 to 1989?

It was really important for my art experience. Before then, I didn’t really comprehend the arts in the world. I learned the change of arts worldwide through study in Germany. I also began to comprehend Chinese traditions. We hadn’t even known about Chinese traditions, not to mention about anything outside of the country, before the end of the 70s and 80s when the Cultural Revolution happened. These became my great assets.

Besides, I was too young before I went abroad to know what I could do with my artworks. Neo-Expressionism was the mode at the end of the 80s in Germany and I found hope in drawing. I still draw nowadays because I believe that drawing has a future.

Is there any artist who influences you for your artwork?

I’d been influenced a lot from other artists when I was young, but I’m not anymore. I would be in trouble if I was still influenced by somebody. However, they do attract my attention. I am now quite interested in Chinese traditional artists. But it doesn’t mean I draw traditionally myself. I need to have a current point of view. 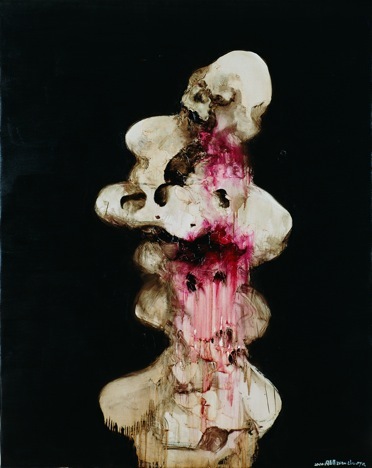 Why do you give so much weight to “tradition”?

We are affected unconsciously by traditions. I could say that I don’t like traditions, but traditions are something deep-rooted. Besides, I’m not an avant-garde artist. If I were one, I would make an effort to keep some distance from tradition. I’m trying to keep my individuality although I do get influenced a little by traditions. This makes my artworks and thoughts complex, and that’s something I find interesting. My artworks have traditional elements, yet they’re not completely traditional. This is what I’m aiming for. And most importantly, the artworks should be something to make people think when they see them, just like you did when you saw “Green Dogs” and “Peach Blossom”. 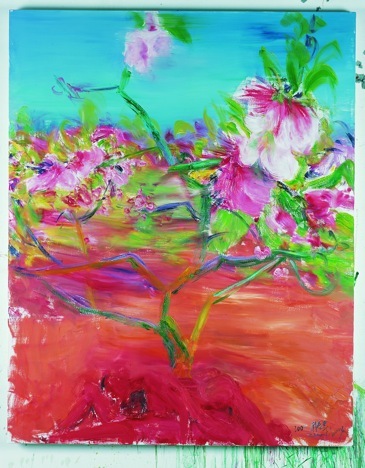 You’re handling the 5 Colours Foundation besides your creation work. Tell us about it.

There was a big earthquake in Sichuan in 2008. There were a lot of casualties. There are children who survived yet lost their hands and legs, and became disabled. I thought of what I could do as an artist. I’d given food and clothes at first, but then later on I set up art classes for them. Young artists teach arts to those children. They teach arts and support them to enter an art university. When they concentrate in drawing, they aren’t aware of their problems and they also learn techniques. It will be useful when they look for a job in future.

I would say this is a very practical way of support. Teaching them techniques has more value than just giving them things.

A work is about self-esteem. I think it is good to earn from your work. Not by the pithiness, it is best that they themselves design and create things. Several years have now passed since the Sichuan earthquake, and there are some among them who work with other people in a design company.

How are you managing it?

I’d invested at the beginning. At present, we hold auctions every year with other artists who are sympathetic to these activities, gathering our artworks. (Xue Song and Ding Yi, the artists we had interviews with before, also participate in this activity). Collectors have bought artworks from many of the artists up to now. Needless to say, the artists are not getting paid. 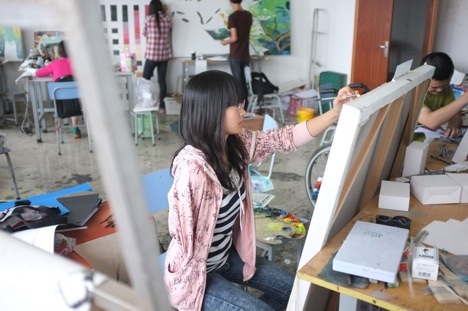 How is the children’s response when they start learning art?

There was a big change, many stories were born. I met them in the ICU. They were about 18 years old at that time. A cute girl lost both of her legs and was pessimistic about her life. Their minds needed some rest. Please take a look at their faces at the exhibition if you have a chance. I’m planning four exhibitions this year. I’m trying to encourage them on a mental level as well as helping them through arts.

Someday, some among them may become an artist like you.

I would be delighted if that happens. Then the situation of children with disabilities will be made even better by their influence. If not, it’s all fine as long as there’s new hope born for them.