During the cold months of January through February, the initial silence that greets the visitor to the Mary Boone Gallery unfolds in almost grotesque yet surrealistically beautiful tones as one adjusts the distance to the series of 90×72, 64×64 and 31½ x 25½ paintings. Tomoo Gokita’s most recent exhibition, and his first one at the Mary Boone Gallery on West 24th street location in Chelsea district of New York is exquisite in technical execution and lush with cultural reference. The highly nuanced, colorless paintings sparsely positioned appear quiet at initial glance, almost reticent, initial glance being the key operative phrase here. Gokita, who has worked with similar styles of paintings, continues to cultivate the post-surrealist aesthetic while employing the language of popular culture, advertisement, and film noire. All 15 paintings, gauche, charcoal and gesso on linen to be precise, were made in 2013. 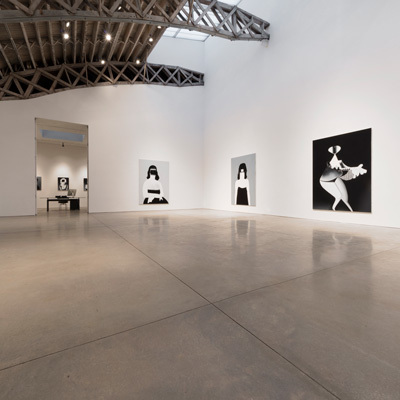 The crisp lines simultaneously flatten the figures and differentiate them from the nearly completely undecorated backdrops that seem to imitate traditional contemporary portrait system, something akin to a school portrait. The sitters are frozen in the moment, perfectly plump, properly dressed and most importantly, in the midst of a painterly liquidation. Upon closer view, they unfold in a whole new dynamic. That is, in contrast to the sharply manufactured lines the faces of the paintings are rendered in infinite gradations of grey, textures abound, where paints mix, drip, revealing brush strokes and layers; even what’s underneath, as in, the hand-drawn lines that seem to have been made with charcoal. Subjugated to the hands of the painter, the images oscillate between iconography and obscurity, what was once a familiar archetype such as a waitress or Marylyn Monroe become a field of metamorphosis, working between representation and abstraction. In all 15 paintings, there is not a single face that is legible, making this experience of viewing beyond eerie, approaching monstrous. Interestingly, this is also where I derive a certain painterly pleasure – where the rectangle reveals and declares itself decisively as a painting, where one can lose the self in being absorbed in the allure of the graceful monochrome and subtle lines made by the drizzling paints. 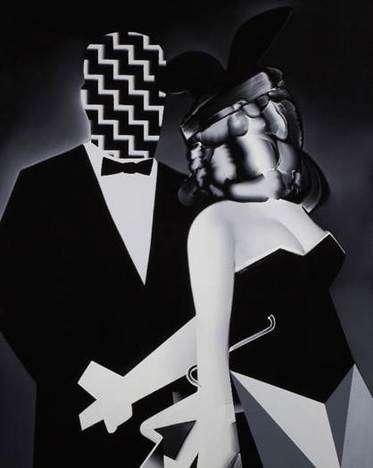 The myriads of cultural references are defined through selection of clothes and postures, as well as stylistic appropriations such as the arresting and severe contrast, and use of the overall darker tones, as seen in Captive Bunny, and especially accompanied by the title, they are rather unmistakable. Captive Bunny boldly plays off of themes in film noir with the clearly masculine criminal figure in suit and tie, and the female in excessively sexualized (bunny) suit, where love and death might be nearly exchangeable, though sex is indispensable. However, the easily discernable references are twisted in the artist’s hands, becoming something entirely other in the process. They are not only melodramatic in appearance like the film noir, but also similar to low-fi science fiction from the classic era like the Metropolis, where it operates on the level beyond appropriated imageries and a cluster of historical lessons, but offers a clue to understanding cultural phenomena. The distorted image and manipulated icon disturb the relations between the sign and the figure, placing importance on ambiguity and amorphous possibilities within this disjuncture. The sources then denote not only the original but also the process of becoming. Becoming what? I’m not sure. But it doesn’t really matter, as what seems indicative here is not a fictional endpoint and instead it articulates the very discursive nature of image and being. 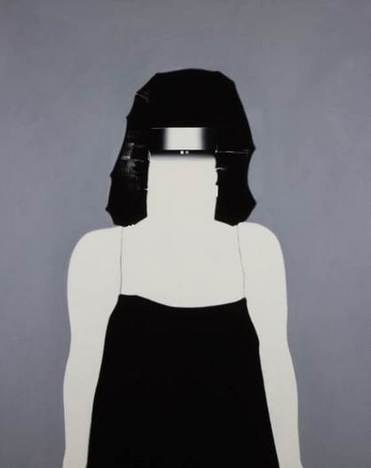 The images from the past are not concrete, but rather malleable, even fragile and subject to constant change. Perhaps even more so today with the accelerated rate at which images are engineered, circulated, and recontexualized through increasing accessibility to technology. Artists such as Gokita, not only sensitively observe these changes but also vigorously create them. Having gone through multitudes of projects including graphic design and producing zines, Gokita is an artist I look forward to seeing what evolution he will take next. His solo exhibition is due to open at Kawamura Memorial DIC Museum in August 2014.