Andreas Gursky is a major exponent of German contemporary photography whose photographs are striking for their massive scale and size. His work is notable for revealing the inner workings of contemporary society and the world around us. Gursky’s photographs convey a mysterious beauty that sets them apart from more average photographs.

Gursky employs the black colour for maximum impact, in a way closely reminiscent of Rembrandt’s paintings. His compositions are made up of a number of contrasting characters and movements that come together to form a uniform picture. Unconcerned with capturing a single moment as a photograph, the appeal of his work lies in the meticulous planning Gursky carries out to reach his final vision. 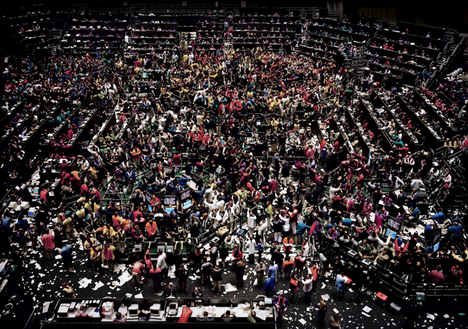 When you think of Gursky, the images of large crowds come to mind and at his Osaka solo show many of those pictures are on display. However Gursky emphasises the setting and the environment just as much the people inhabiting it. Capturing the hectic bustle of a stock market exchange as the centre stage of capitalism, he brings out an element of inhuman and cold beauty from behind all that frenzy. 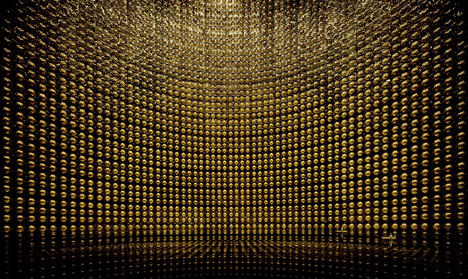 This work was based on the Super Kamiokande neutrino observatory located in Gifu Prefecture. The overwhelmingly large cylindrical tank structure is juxtaposed with the figure of two humans on boats at the bottom of the image. This juxtaposition implies a sense of perspective and in one stroke effectively draws the viewer to the image. 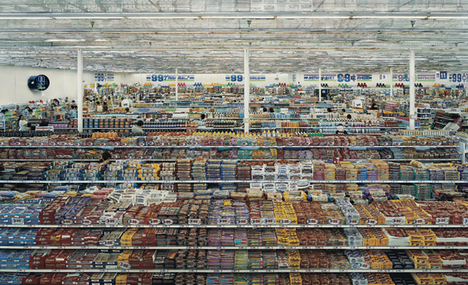 Shot at a Los Angeles discount store, the horizontality of the composition, its colorfulness and the 99 cents motif are very appealing to the eye. The discrepancy between the large amounts of junk on display and the rigidity of the horizontal lines presents consumer society in an ironic way. 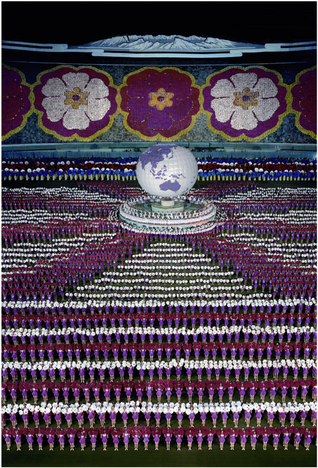 This is Gursky’s depiction of the yearly Arirang mass games that take place in Pyongyang, the capital of North Korea. It is a beautiful minimalistic composition where rows of young women line up to form an ensemble akin to a human machine. However that is not the only appeal of this picture; the expressions on the girls’ faces are also striking. Their faces are something you cannot manufacture in images; the randomness and minute detail could only be captured by his skill with the camera. Gursky manages to successfully match photography with painting creating tableaux vivants that set him apart from other living artists.

The Gursky exhibition currently showing in Osaka features different stages of his career and should please the visitors who have not experienced his work before. People who know Gursky will also be able to enjoy all the different facets of his photographs. At this exhibition you will certainly be able to admire his large-scale prints in the way they are meant be looked at.