The Tatsuno Art Project held for the third time in 2013. The venue chosen is the “Castle Town Museum,” an area that still falls under the shadow of an Edo castle town. Tatsuno City, also known as the “Small Kyoto of Harima” has many cultural properties and local industries remaining, including a soy sauce storehouse. Inside of the storehouse, where the former attraction of soy sauce’s sweet fragrance still lingers slightly from the past, all of the art work seems a bit more attractive than they might be otherwise. This exhibit gathered a total of twenty two unique artists, including Hiraki Sawa and Ryosuke Imamura. There are also many local artists involved originally from Tatsuno City. All nine days of the exhibit were filled with workshops, artist panels, and documentary film showings. 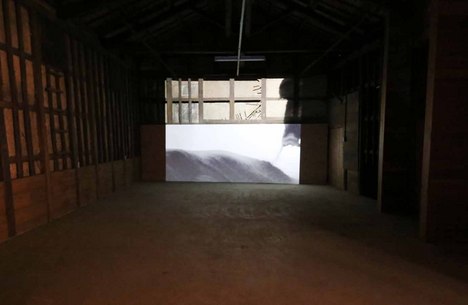 Miroslaw Balka, from Poland, made a visual installation inside of the soy sauce storehouse. As sand flows down, the fallen sand piles up like a mountain and the air bubbles, which are held up by the weight of the sand, climb to the top. The boundaries between things are vague and are steadily altered by time and other factors. Memories of the tragedy and thoughts of the injuries sustained by the victims of World War II are also put in to the work. It also seems to show the meaning of wanting people to find faith and a trace of truth by observing the work carefully. 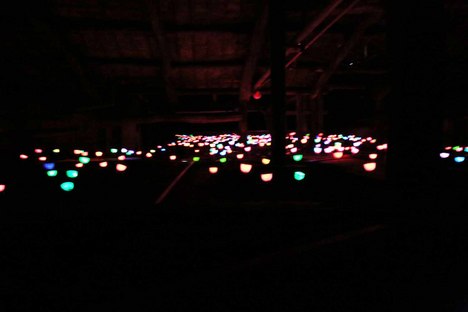 Toshiro Yamaguchi and Shoichi Yabuta compared the storehouse to a woman’s uterus. In a large dark area with fifty 2-meter tall barrels on display, a beating noise resounds, surrounding all 360 degrees. Four hundred flowers with illuminated colorfully represent sperm searching for an encounter with the ovum. This lets the viewer sense the state before they took form as a human inside of their mother’s uterus. The title of the work is “Fermentation=Emission.” In Japanese, fermentation and emission are pronounced the same way. Therefore, Yamaguchi’s creating a unique wordplay between the fermention of jiuqu (used to create soy sauce) and the emission of flowers. 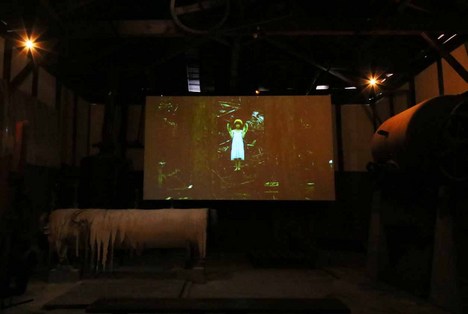 Chie Matsui, who has been expanding the platform for her artistic activities inside and outside of Japan since 1980, produced her work on the spot at the Tatsuno Soy Sauce Museum with the annex storehouse as her stage. Her visual series “HEIDI” was inspired by “heidi” by Johanna Spyri, with a grown up girl mysteriously appearing and coming in to existence. Her work will lead the audiences with a mysterious sense of being somewhere totally different after they investigate an allegory nestled between people’s personal memories and scenery. 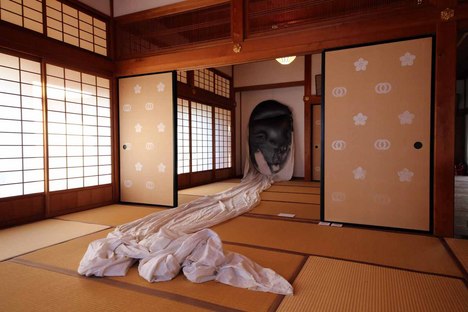 Takesada Matsutani, a member of the Gutai group, created a piece that will impress the audience. The art work “stream – Ootani – Jyuzansou” blends in to its setting, Tatsuno Castle. The black color of this monochrome work was made with a pencil (not sumi ink) by filling in the same spot over and over. He took after the Gutai group’s philosophy to “not copy other people’s style” and “do what others don’t,” and carries this through his own original style. 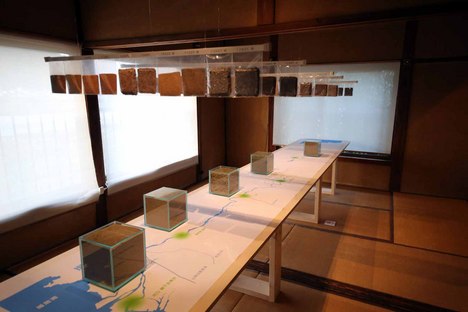 Yoon Heechang displayed his art at the Galleria Arts & Tea. He picked up sand at the foot of the Tatsuno bridge and burned it in a ceramics kiln at various temperatures. The sands came from five different places, including the mouth and source area of the Ibo River which are not originally sand from Tatsuno. This art work tells a metaphor that the town where we live consists of people, things and information that the river carried here from far away. 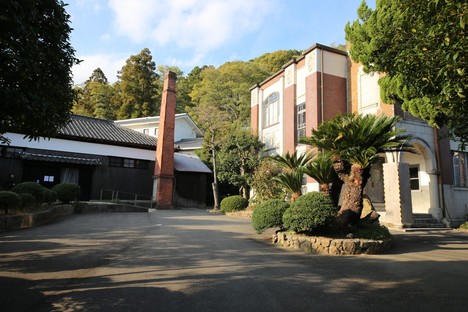 The outside view of Usukuchi Soy Sauce museum annex

The Ibo River and cultural properties of Tatsuno City give it a natural charm. This art event was created by gathering all of the elements of the town, including restaurants, gift shops and motels. There are hopes to carry such an attractive and highly successful event to other places all around Japan.