A single large event occurs, experienced by many people at once. Because of varying factors—one’s life before that moment; personal reactions as the event unfolds; how it changes one’s life thereafter; influences felt from others around one—everyone present will interpret the event differently. Each person’s interpretation, moreover, will be right in its own way. (from the exhibition outline for MOT Annual 2012 “Making Situations, Editing Landscapes”)

When each and every differing thought is equally correct, how will we interact with those who hold opinions that differ from our own? 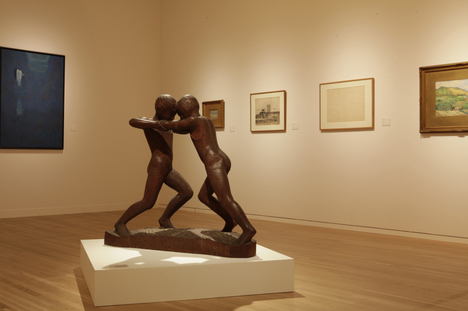 The MOT Annual is a group exhibit that the Museum of Contemporary Art Tokyo has been holding continuously since 1999, each one with a topical theme that links to its respective era, introducing mainly young artists. The 12th exhibit of the series, the 2012 MOT Annual, took place from the end of October 2012 to the beginning of February 2013. With “Making Situations, Editing Landscapes” as its theme, seven artist units came together for the exhibit. The common premise for all of these participating artists was to create artwork by introducing strangers into situations created by the artists. As the Japanese title of the exhibit “coopers make a profit when the wind blows” (a proverb that refers to unexpected outcomes occurring as a result of a certain phenomenon) suggests, works by the seven artists loosely intertwined and prompted various questions to pop up in audience members’ minds.

The exhibit’s first gust of wind blustered before one even entered the museum. After handing over your ticket, the ticket taker handed you a piece of paper and informed you: “Koki Tanaka’s work is not inside the museum. Mr. Tanaka is working outside of the museum.” Tanaka, known for his videos full of humor that suggest the multiple contexts hidden in our mundane actions, is representing the Japan Pavilion in the 2013 Venice Biennale. He is one Japanese artist who is sure to gain more attention in coming years. Tanaka states: “by emphasizing activities outside of the museum, I want to introduce a different perspective to relationships between exhibits and artists, and the way one experiences an artwork.” *1 For this reason, the artist did not display his work inside the museum. Where, then, could one view Tanaka’s piece? The clue this question’s answer was written on the piece of paper that was handed to you at the entrance. All of Tanaka’s activities during the MOT Annual exhibit were listed on the paper, from guerilla talk events inside a train car on the Yamanote Line, a video screening at a theater in Shibuya, to letters exchanged between the artist and a museum curator published on the online magazine ART iT; his “works” taking place in different places in various ways were listed. Many of these “works” took place only once, but their creation processes and unveilings were carried out actively online, *2 surpassing existing ideas of what constitutes an exhibit. 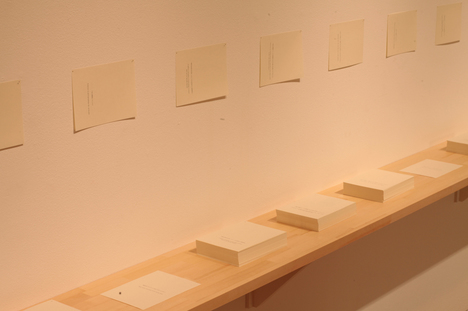 “Doing, something, together, where people assemble” by Hiroaki Morita

The first work that visitors encountered inside the museum was Hiroaki Morita’s. Stacks of paper on wooden shelves lined a white wall in an exhibit room. Each piece of paper had text on it stating something like, “Everyday, one piece of work by Hiroaki Morita will be thrown away. You are allowed to pick up the piece from the trashcan and take it home”; “There is a place where you can recharge your phone”; or “Somebody might ask you for directions to the station.” On the back of each piece was a simple map of the museum and an arrow indicating a specific spot. This piece seemed to call upon visitors to recognize that they are not merely bystanders viewing artwork, but participants in this exhibit, by stimulating their imagination and actions. 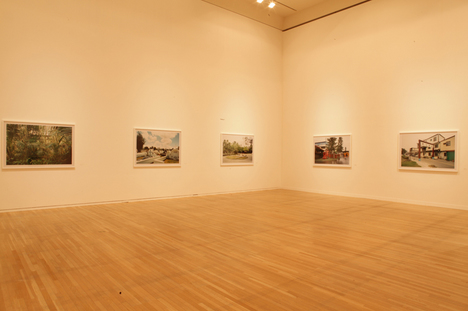 The next room housed works by photography-based artist Motoyuki Shitamichi. New works in his “torii” series, which has continued since 2006, comprised his exhibit. This series captures “torii (Shinto shrine gates)” remaining in locations, like Saipan and Taiwan, that were under Japanese occupation during World War II. The torii in Shitamichi’s series have stood in foreign lands for decades, and have lost their original symbolic significance; they have become integrated into various foreign environments. Among the toriis that have been torn down and being used as benches and toriis that loom over rows of crosses in a Christian cemetery, there was one image without a visible torii, which was shot in South Korea where most of the toriis were torn down after the war. From this group of photographs that captures the present, one can observe the artist’s clear and sincere gaze directed towards how local people in each location confront their histories. In one corner of the room, there was also a copying machine which, when visitors pressed the print button, printed out a special double-sided handout that included handwritten journal entries by the artist on one side and copies of train tickets and schedules from his trips on the other side (from time to time, the artist switched the originals placed inside the machine). 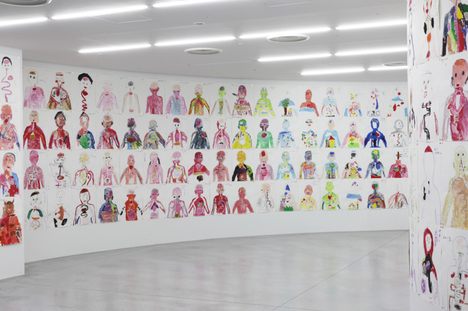 Yuki Okumura, who is also active as a translator, focused on the theme of subtitles in videos. Part of his exhibition was past video works *3 by four international artists Jun Yang, Koki Tanaka, Ryan Gander and Simon Fujiwara. Okumura contributed to these works by adding Japanese subtitles. From discussions on ghostwriters to the notion of friends of an artist coming up with an idea for the artist’s new work, each video dealt with themes of independence and originality. By adding a translation filter to these works, they transformed into entities that included Okumura’s subjective interpretations and decisions, and thereby increased the layers to the works’ semantic structure, and the viewers’ understanding of the works were somewhat compromised. In addition, next to the first floor museum shop, artwork from Okumura’s children’s workshop “Anatomy Fiction” was also introduced. On large pieces of paper, children drew outlines of their upper bodies, and used their imaginations to fill out their insides using crayons and paint. By bringing in blue skies, trees, and animals inside their fantasy bodies, these anatomies transcended accepted boundaries and conveyed the lightheartedness in which children try to create new contours for themselves. 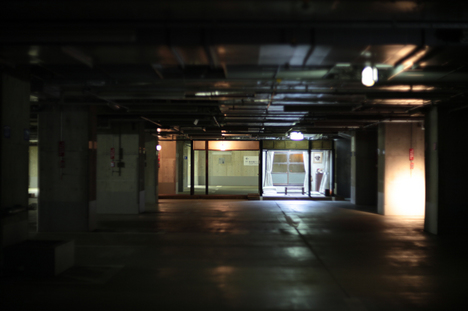 The mood changed in the last room on the third floor from the previous exhibits, and bronze statues by Auguste Rodin and oils by Seiki Kuroda were on display. What looked like an orthodox exhibit space at first glace was a “situation” created by Yuichiro Tamura. His works, such as creating videos without shooting, have included pieces whose very production processes seemed to prompt questions. For this exhibit, Tamura took up the theme of “encountering the past,” and developed an installation in the third floor exhibit room that linked to the basement parking. The exhibit was made up by repeating the following three processes: (1) choosing 77 pieces from the museum’s collection, (2) using the titles of these pieces, creating a story entitled “Fukai Numa (deep marsh)” that has to do with the history of Fukagawa (where the museum is located), and (3) narrowing down the 77 pieces to 20 or 30 that relate to Fukagawa’s history and displaying them on the third floor, and creating scenes based on these pieces in the basement parking lot. By entering the scene in the basement, created by a professional film set designer in various ways such as turning new wood into old artifacts (to recreate an actual residence that used to stand in Fukagawa, including an entrance, hallway, and a room with six tatami mats), and sitting on the tatami mats and attuning your senses to this space, you picked up the slight swaying of the structure, the sound of glass windows shaking, noise from a radio, and music that sometimes flowed in from the opposite end of the parking lot. By further focusing your senses, you noticed that the sounds and lights in this spacious parking lot were all scattered intentionally. Getting up from the tatami mats, and walking down the dimly lit parking lot, the artificially constructed situation extended still, and it became impossible to tell where the boundary between reality and fiction lay. This piece allowed each visitor to interpret the situation differently, but it also felt like an homage to museums, which collect memories and histories from different eras as artwork and examine how various media deal with time and space. 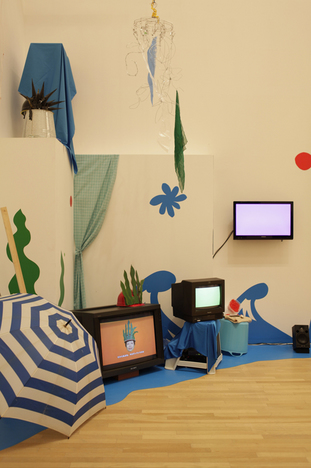 Nadegata Instant Party (an artist unit consisting of Tohru Nakazaki, Daisuke Yamashiro, and Tomoko Noda) established a baby boomer generation choir group, and presented a documentary based on the choir in a video installation. Known for their process-based works that implicate a large number of strangers in a single big event, the trio wanted to “hear what the baby boomers, who played a significant role in building modern Japan, had to say.”

Shun Sasa, whose works borrow methods used in plays and novels, exhibited a three-part piece comprising a large-scale installation, video, and text written in diary-style. In this piece, “That day comes, having gone through those days,” there were handwritten notes recalling the artist’s memories with a friend who passed away during the Great East Japan Earthquake, posted all over a wall with a table set up in the middle of the room to look like a coffin. The performance that took place during the exhibit used this space as a set, and the artist reminisced about the past, at times conversing with his friend in the coffin, replacing the existing words on the notepaper with new words. This piece seemed to indicate how the past and our memories are ambiguous and are not fixed, but transform as they blend with the present. 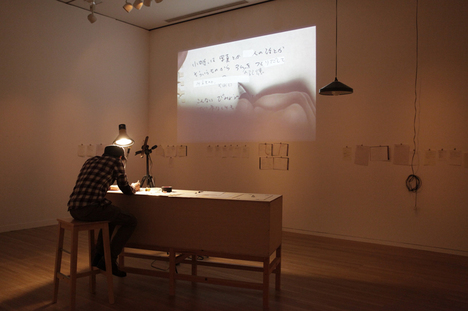 “That day comes, having gone through those days” by Shun Sasa 2012

I may be reading too much into things, but the outline to this exhibit introduced at the beginning of this review, “A single large event occurs, experienced by many people at once,” made me think of the Great East Japan Earthquake in Japan (and the state of the nation since the disaster). A society in which differing ideologies co-exist is undoubtedly healthier than a society controlled by standardized actions. However, dismissing differences by accepting everything without debate is almost as pernicious as a uniform society. Considering the lively exchanges on social media outlets like Twitter that had been taking place since the exhibit’s opening, it seems like this exhibit *4, which attempted to provide a platform for discussion, gently encouraged us to think of suitable ways of relating to others. The wind that these seven artists and one curator blew individually and as a group will continue to blow and converge. This is an exhibit that will most likely continue to develop now that it is over.

*1 Quote from “Koki Tanaka Correspondences 8-1: to Mihoko Nishikawa 1” in online magazine ART iT.

*2 For example, the work screened at a movie theater is also available on the Internet, and a record of the talk held on the JR Yamanote train line can be downloaded.

*3 This is the first time Japanese subtitles were added to Koki Tanaka and Simon Fujiwara’s works.

*4 The exhibit blog (Japanese only)