The Skulpturen Park, is a park in Köln where international contemporary sculptures are being displayed during two-year exhibitions. This article describes KölnSculptur #6, the sixth exhibition cycle, which started on may 15 2011, ending on may 1st 2013. 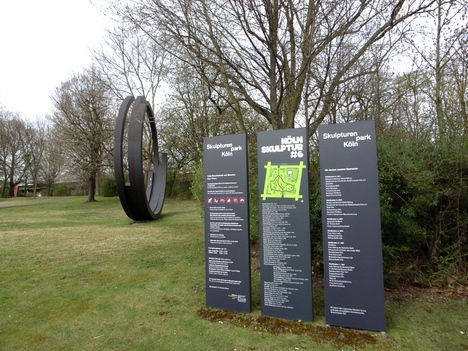 The park is located in the north of the city, right between the Riehler Strasse, the Zoobrücke, the Elsa-Brändström-Strasse and the Konrad-Adenauer-Ufer. As these are all main roads, the sound of the traffic makes it impossible to have a relaxing walk through the park, unless you wear earplugs maybe. The best way to reach the park is by metro: station Reichenspergerplatz.

Maybe because of visiting KölnSculptur #6 during the last weeks of its two-year period, the park looked kind of desolate. No other visitors were around and the cafeteria was closed without any signs.

Enter the park either in the south at the Konrad-Adenauer-Ufer, or if you come by metro, enter the park in the north at the Riehler Strasse. 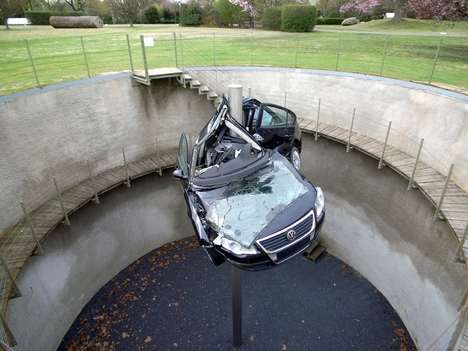 The most interesting works are the ‘L’Arc de Triomphe, 2006’ by Rosemarie Trockel: two Atlas ceders, ‘Large Mirror Nijinski, 1993’ by Barry Flanagan: two nicely crafted bronze figures, and ‘Reaktor, 2009’ by Dirk Skreber: a Volkswagen car smashed around a pole inside a large round hole in the center of the park.

And of course there’s an untitled work of the well known Anish Kapoor, which is basically just a polished steel dish. 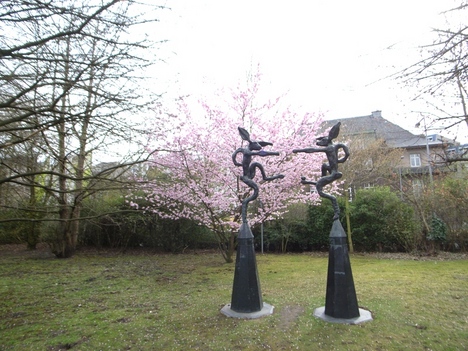 As is normal with contemporary art exhibitions, some works will really make you wonder if something’s missing, e.g. ‘Untitled, 1996’ by Stefan Kern: a white three step staircase, ‘Greek Cross Labyrinth, 2001’ by Dan Graham: a steel/glass construction, and last but not least ‘Garten, 1997/99’ by Peter Fischli and David Weiss: a bench made out of stone.