Musician, Shuta Hasunuma had kept evolving since his first album in 2006: he has composed for stage and film; held live concerts; and been involved in performance and art installations. He has been seamlessly involved in so many scenes. And what is his latest move? I had an interview with him while he was being busy with his exhibition. 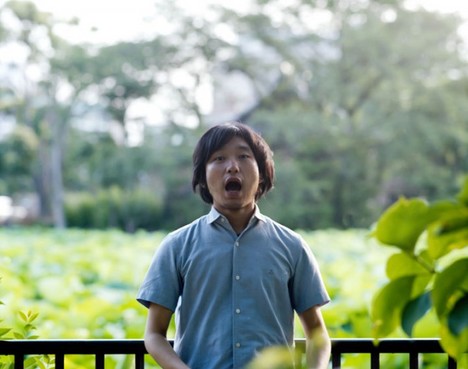 Could you tell us about your encounter with music?

Actually I’m not from a musical family, but I practiced electric organ when I was in kindergarten, and as I was growing up, I always had to play the piano for some event like the chorus contest at elementary school. I had to practice very hard at the last minute (laughs). I started composing when I was in university and working at a record shop in Shibuya. I was playing around with my music sampler MPC2000XL. Also, I majored in environment studies, which led me to field recording and writing programs to make electronic sounds. I released a self-titled album on an American indies label when I was in my fourth year of university; I think that was when I started taking music seriously. 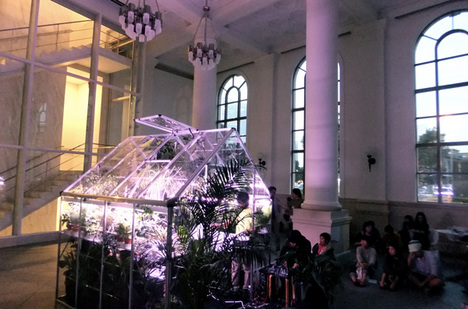 What made you suddenly release an Album?

This might sound like a young-person-thing, but I just did not want to work for a company after graduation. That’s why I wanted to create something I could call my “work” . It didn’t have to be music, but that was the fastest for me. On my album, I played music and added my field recording sounds, electric noise, and various instrumental sounds.

Listening to your early works, I recognize field recording as being a major part of your music. I don’t have the ear for music to understand how to create something like way.

Field recording doesn’t really require any ear for music, unless you want to make sampling music or things like tape music (*1) or musique concrète (*2).

Fortunately, I have a sense of pitch. but that is just a physical thing, something like you can run faster, or nimbly thread a needle. 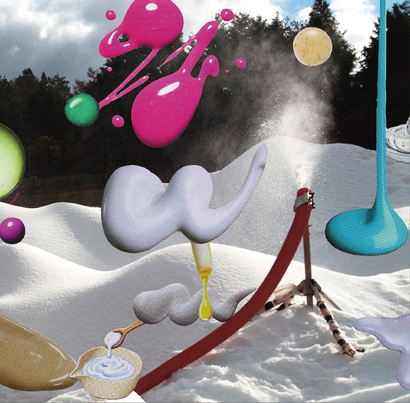 You used to create abstract sounds using field recording sounds or electrical noise, but I feel your recent works tend to be more melodious. What’s caused this transition?

Well, there are some melodies on my first album but especially in my recent projects, I care more about the main melody. I think I’m getting less nervous about composing or putting things out there. Now I know more about how to do things, and thinking of better ways. Also I’m getting more experienced. But I like listening to music more that playing or composing; I gain more experience from listening to music. I’m the first one who can listen to my own music, too! 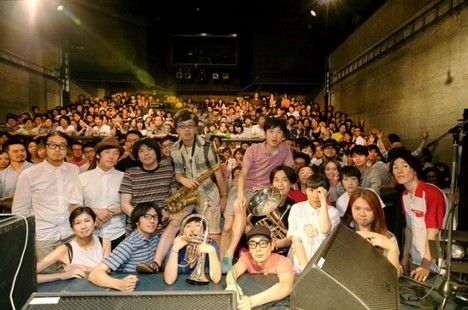 Organizing Team Hasunuma/Fill, composing music for plays and movies… you have been crossing over all genres.

I don’t think “Crossing over genres” is the best way to say it. I don’t think I have to get over a certain genre. But I want to continue installing my music in various art forms instead being conscious of what is music and what is art. Even more, I want to keep questioning myself about ‘what I have created’ — that’s where I get my ‘heads up’. That is because each art form has essential ways of making things. For example If you composing music for a movie, you get a chance to think of what the role of music is in a film.’ Answering these questions yourself creates an original musical theory and becomes an experience. 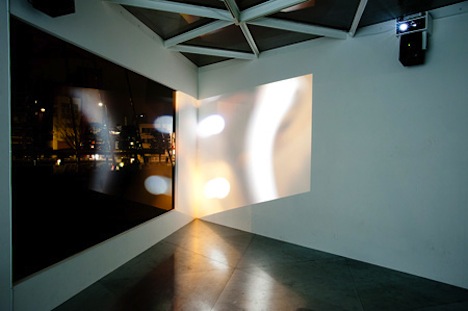 Installation view of “have a go at flying from music part 3”, Museum of Contemporary Art Tokyo, 2011 Photo: Takehiro Goto

For your Exhibition, “Oto-Teki (sound like)”, you held “Studies of Shuta Hasunuma“. This contains a nuance of field recording. Is your creation always based on ‘research’?

My approach is a little too instinctive to just be called ‘research’. Similar to field recording, I experience the site, and do my best to try to catch everything, and sometimes not catch but blur things… it’s accumulation and chain reaction.

Hmm…a little different from a session, because of the musical feeling that word contains. I think it’s closer to observation. That’s why I call it “studies”: to express the way time is compressed. While experimenting with many things, I shot film of poet Ryota Yamada reading the play “Time,” and did recording with musicians, such as Noki Otani and Misako Kinoshita. I also organized a musical event with many guests. 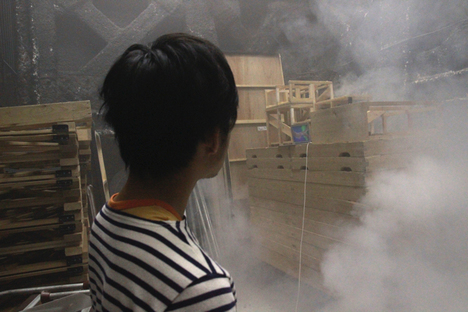 Tell us about your “Oto-Teki” exhibition.

I’m going to exhibit 10 of my new works, which were all recorded from between the end of 2012 to January this year. I had wanted to start a little earlier, but there was a tight schedule due to the Fill concert and other things. For example I had never put music on my own video before, but this time I tried it for the first time. Also, I have footage from the shoot of the play “Time”, and music created from a sound of touch glass to glass, which sounds like a sand clock, There is going to be a live shoot during the exhibition for introducing the members. Also there is a piece which was inspired by Ricard Serra’s video art called “Boomerang” — I filmed my friends humming a melody I composed. I called it “Communal Music.” You can see these in the middle area of the exhibit, too.

Are you in charge of the sound design for the exhibit?

Yes, perhaps that is the most obvious part of the work I do (laugh). From technical calculations to sparing space for happy accidents. For example, my piece “Communal Music” includes the sound design as an aspect of the art. The main concept of that piece is not only to do with the sound from 10 speakers; the sound is completed with the natural noise from the environment. So for me, composing includes assuming the natural noises as a one musical factor. The music changes depending on where the listener stands; or by mixing with other music. I don’t think this is a negative thing. It is the essence of music. 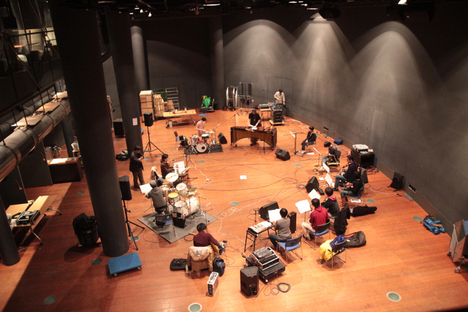 As an abstract title ‘Sound like’ makes the process seems clear.

Actually the title is too clear (laugh). The message is “Sound like”, so it’s not only “Sound”. Personally, I didn’t want to use the word “sound” as an exhibition title, but I took this from an English expression. I use “music” as a medium to create my art, but, on the other hand, my projects are taking a very different position than “media art” or “sound art”. Right now, as a study, I am exchanging opinions with panelists online as a preparation for a symposium on 13 February called “New Fiction / Documents / Borders”, We discuss a lot about our understanding of history, and I am consciously trying to present the huge history of music in a contemporary style. I hope I can keep trying to evolve the acceptance and value of music.

It is interesting that you are naturally surrounded with art and nature.

It just the result of actions. I try and fail and try and fail… (laughs). Anyway, I think there was a lot of generic interaction in art in Japan in the 60s . I’m trying to rethink the expression of that feeling by myself.

（*1）Tape Music
Tape Music is a form of music which experiment composing by cutting tape segments for each occurrence of each sound were accumulated on the score. It includes narrow sense of electronic music and Musique concrète. (Source: Wikipedia)

（*2）Musique concrète
Musique concrète is a form of electroacoustic music that is made in part from acousmatic sound. The theoretical basis of the style was developed by Pierre Schaeffer, beginning in the early 1940s. (Source: Wikipedia)