The Louvre-Lens is the first step of the Global Louvre project, before the opening of another branch of the world-famous museum in Abu Dhabi. After the launching of an annex of the Pompidou Centre in Metz, this is the second time that a major French museum settles a secondary space outside Paris, with much success in both cases. The Louvre-Lens opened its doors on December 4, 2012, and instantly drawn a very large number of visitors, exceeding all expectations. 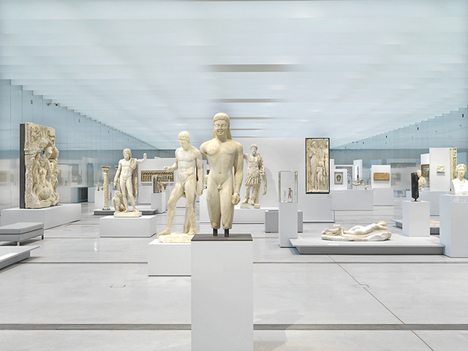 The Louvre-Lens is settled on a former coal-mining site, in the French Northern city of Lens. Many years after the closing of its last mine, Lens still bears difficult economic and social conditions and, following the example of the Tate in Liverpool or the Guggenheim Museum in Bilbao, the Louvre-Lens aims to play an active in local regeneration and in the modernisation of the area’s image.

Far from being a second rate exhibition place for the original Louvre, the Louvre-Lens displays carefully selected objects from the collections of the Parisian Louvre. These works are lent to the Louvre-Lens on a medium or long term basis and, for the opening exhibition, such masterpieces as the Portrait of Baldassare Castiglione by Raphael or La Liberté guidant le Peuple by Eugène Delacroix were presented (the last one being vandalized on February 7, 2013, by a deranged woman who scribbled AE911 with a black marker… a graffiti who fortunately could be removed without further consequences for the painting). 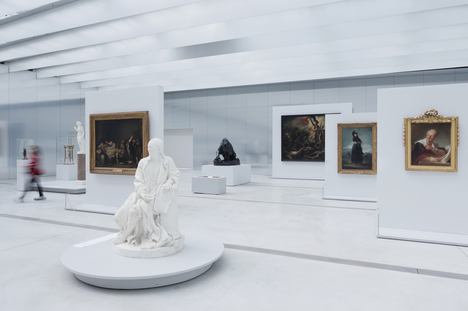 The building of the Louvre-Lens is the work of the renowned Japanese firm SANAA, in collaboration with the American construction cabinet Imrey Culbert Architect and the French landscaping architect Catherine Mosbach. The latter created the garden surrounding the building and which is still largely in progress. The building’s structure very much reminds one of the 21st Century Museum of Contemporary Art, Kanazawa, also by SANAA, but on a larger scale, and with a direct reference to the mining past of the place, the temporary exhibition galleries being built underground. 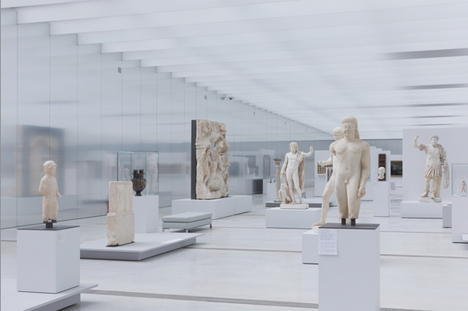 The ground floor, with its three parts linked to each other, seems to stretch towards the landscape. The main hall, with its four entrances, is indeed the nervous centre of the museum. Visitors can find there the ticket and information offices, a large shop, a resource centre, a picnic area, a cafeteria… Glass is the main material of the hall, bringing light and lightness to the structure, but it also seems somewhat incongruous for the resource centre, just settled beside the cafeteria, not an ideal place to find calm and peace of mind. The general idea of the architecture is anyway one of airiness, like boats floating on a river, and of merging with nature, the surrounding gardens reflecting their image on the glass walls. 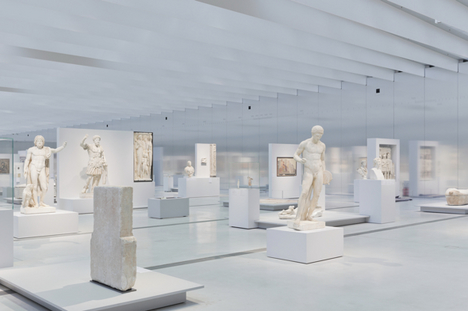 The access to the exhibition rooms is also made from the hall. The Grand Gallery or Time Gallery (Galerie du Temps) is the most important of these exhibiting spaces, with 120 meters in length and a total surface of 3,000 m². The space is divided into two parts: the Gallery and an additional exhibition place called the Glass Pavillion, both dedicated to the permanent exhibition. As its name suggests, the scenography of the Time Gallery is based on a chronological order, with works all settled in a unique space, following a chronology that is reproduced on the lateral metallic walls. The exhibition leads the visitors from Antiquity to Modern Times, with Delacroix’s Liberté guidant le Peuple as the closing work and focus point of the installation.

The underground space presents three months long temporary exhibitions, on various themes. After a first exhibition about Renaissance painting, the second one is dedicated to Rubens and his time.

During the first year of the museum’s life, until the end of 2013, access to the Time Gallery and Glass Pavilion is free, as well as the shuttle bus between the museum and the train station, and the parking. Audio-guides are also available for free.