In 1951 the Southbank Centre was created as part of the Festival of Britain, it is an arts centre located on the south bank of the Thames. It is Europe’s largest art centre with a wide variety of cultural events, thousands of musicians and artists have performed, created and astounded millions of visitors. On a site of over 21 acres it has three main buildings, one of which is the Hayward Gallery. This gallery opened in 1968 and stands out for the exposed concrete construction which is visible inside and outside, typical features of Brutalist architecture which was popular at that time. It does not house a permanent collection; it hosts three or four temporary exhibitions every year. From the end of January to the end of April a very peculiar kind of exhibition took place, featuring the work of over twenty artists dating from the 1960s to the present day, the Light Show presents how light has become a method of art and as a type of art has evolved. 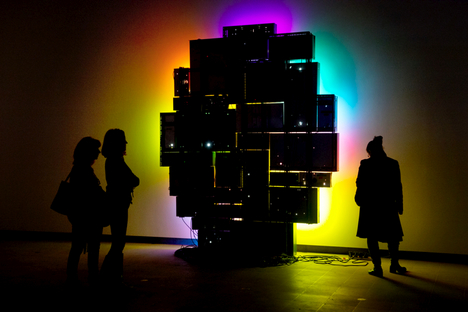 Upon entering the exhibition your eyes are quickly drawn to Leo Villareal’s Cylinder II, nearly 20,000 LED lights have been programmed to endlessly create changing patterns and shapes. The lights are enclosed by reflective hanging rods in concentric rings, the lights themselves sometimes dim, sometimes brighten, in a display with no beginning and no end. Nearby David Bachelor’s Magic Hour has been placed against a wall, ‘magic hour’ refers to the moment in Las Vegas when the sun goes down and the city’s numerous artificial lights turn on. This artwork was created from commercial lightboxes salvaged from skips, etc, and which have found a new life, but significantly they face the wall presenting a dark image which is outlined by the back to front light. 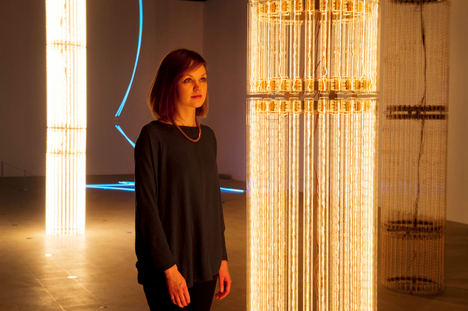 Upstairs from Cylinder II and Magic Hour, Cerith Wyn Evans’ S=U=P=E=R=S=T=R=U=C=T=U=R=E presents three illuminated columns which slowly brighten up and then dim back down to darkness in a way similar to breathing. Wyn Evans was inspired by a poem which used messages given during séances by spirit voices when it was composed. This artwork as well represents something that has a life of its own, that somehow exists between two worlds. A nearby door leads to complete darkness lit only by a video projector, this is Anthony McCall’s You and I, Horizontal which forces the viewer to contend with a room of absolute darkness except for the light projection which exists as a 3D sculptor that one can interact with. 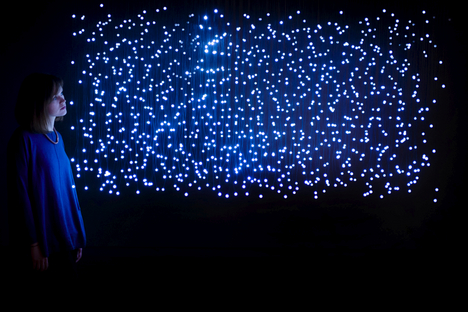 Also in the lower gallery one could see a fascinating, yet small, exhibit by Bill Culbert, Bulb Box Reflection II. This artwork dates back to 1975 yet it continues to intrigue for the fact that it provides a puzzling sight; a light bulb facing a mirror, however the light bulb is unlit while its reflection in the mirror is lit. In the same room it is possible to see Jim Campbell’s Exploded View, this consists of a grid of wires suspended from the ceiling with over a thousand LED bulbs that turn on and off, from most viewpoints it appears as a large number of lights blinking randomly, however from other viewpoints shadowy figures can be seen moving around. The artist wanted to create an artwork which can be recognized without people thinking about it, and this is done beautifully as one sees the shadowy figures automatically. 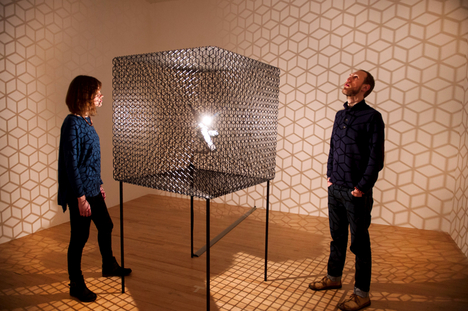 Conrad Shawcross’ Slow Arc Inside a Cube IV is located in its own room and is quite frankly a fascinating, but eye crossing, artwork. In the centre of the room within a cage a light constantly moves back and forth creating a lattice of shadows on the walls which constantly expand and deflate. It is a truly interdisciplinary piece of art as it is inspired by physics, metaphysics, biology, geometry, philosophy and cosmology. In a room opposite Katie Paterson provides a very poignant artwork entitled Light bulb to Simulate Moonlight, it has become increasingly difficult to view natural moonlight in many places in the world due to the use of artificial light. In response Paterson has created a light bulb which replicates exactly moonlight, it is certainly a challenge to everyone who views it to remember the fact that, for many of us, natural moonlight is something that we have never seen despite the belief that we all know what moonlight is. This artwork also includes enough spare bulbs to provide a lifetime’s supply of moonlight. 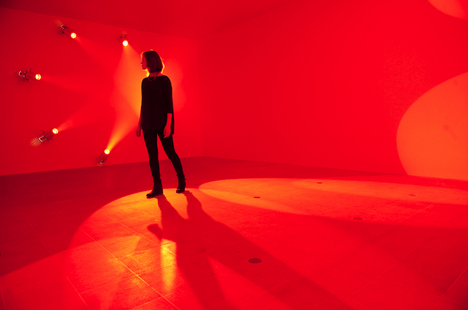 After going up the stairs to the upper galleries one of the first artworks that can be seen is an apparent stairway of lights leading to another level, however this is an illusion created by Brigitte Kowanz. Light Steps consists of an ascending series of fluorescent tubes which create a virtual stairway. Meanwhile Ann Veronica Janssens’ Rose features artificial fog with beams of light from spotlights in order to sculpt light; the light beams seem to become a solid star. The artist tries to replicate altered states of consciousness and push human perception to its limits. 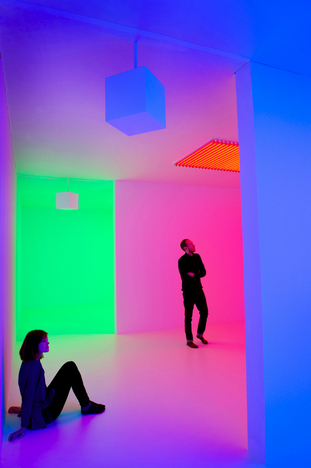 Although there are other artworks at this exhibition a final two must be mentioned, one of which is Jenny Holzer’s Monument. This powerful artwork features LED writing, one stacked upon another, which transmit two texts endlessly. The texts themselves are declassified US government documents from soldiers, officials and detainees regarding the US’s war on terror. Olafur Eliasson’s Model for a timeless garden is arguably the most disorientating work on display, 27 different water fountains are illuminated by strobe lighting which create the illusion that the water is frozen in a moment of time.