After 11 years since Rinko Kawauchi‘s debut photo book “Utatane”, “Illuminance, Ametsuchi, Seeing Shadow” at Tokyo Metropolitan Museum of Photography is her first solo exhibition at a museum in Tokyo. 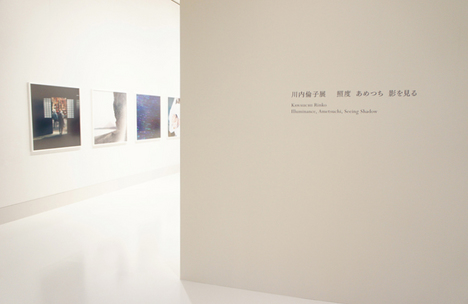 As Kawauchi herself describes, her photographs are timeless and placeless and created without words in an unwritten law. Therefore, as a writer, I couldn’t inquire into her world in words. If you are planning to go to see the exhibition, please do so before you read this article. I intended to discernible about the contemporary photography, also to share my experience by this article.

The exhibition space is separated into two contradictory spaces. The bright space is filled with the photographs from the “Illuminance” series, in which Kawauchi has spent nearly 15 years shooting since her debut. The “Ametsuchi” in which she photographed with a large format 4×5 inch camera, and “Seeing Shadow” series, are displayed in the darker space. 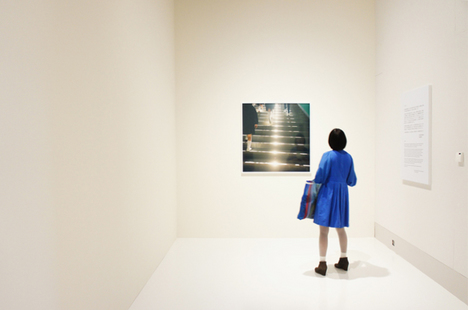 A photograph from the “Illuminance” series, 2007. Photo: Yu Miyakoshi

As soon as you enter the exhibition space, you will see an image of the stairs from the series of Illuminance. I have never seen the light fall this way and intertwined with nature in the urban city. Last year, Kawauchi published her latest photo book “Illuminance”. At the beginning, the book had a different title, “Iridescence”, which she was inspired from the poem by Kenji Miyazawa.
“The gossamer of dim white mist Iridescent” (From Kenji Miyazawa: “A Joke regarding Ice Properties” in “Spring and Asura”)

“Iridescence” means the state of being colored like a rainbow or like the light shining through a prism. Kawauchi described in the press release that “ the same things look different depending on the feeling of the day. The world has a different point of view.” After the entrance, the series from Illuminance continued in the bright white space. Each work illuminates the light like a wave and is as bright as a reflection.

In next room, there are two screens side by side showing the video work from the Illuminance series. Kawauchi, who studied cinematography in the graphic design major in her college, has a unique style of filming. The video work was filmed at almost the same timing as she photographed still images. She must be one of the unusual artists who captures images in such neutral way in both photography and film. 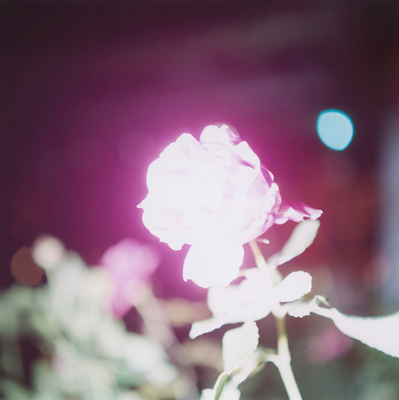 A photograph from the “Illuminance” series, 2009. © Rinko Kawauchi

The video work does not have a particular story and shows the ordinary scenes such as children, hands preparing a meal, the tail of a big fish, and the lane of the countryside. However it was very impressive to me personally. While I was watching the video, I felt like my feeling was purified and my body got warmed. I also felt like I was remembering the faces of my old friends who I have been thinking to contact. All these feelings were elusive but aroused slowly while I was watching the video.

“Video is more physical than photography,” Kawauchi said. Video is more closer to the reality compared to photography, in which captures a moment. Certainly, as a viewer, the video work enabled me to experience the beat of something bigger and systematic. It was a video experience in which my eye sight affected my body intelligibly.

The exhibition space for the latest work “Ametsuchi” and “Seeing Shadow” would not turn into a reality at other gallery spaces. As soon as I entered the space, I understood why this museum was selected for this exhibition.

On the ground of one of the stars among the immense universe,
I think of the beginning,
The Earth is a mirror to project heaven.
Photography captures the mirror. It connects the Earth and heaven.
When the darkness reaches at the bottom, the light will arrive.

As her above statement describes, the universe-like space is expanded in the wide and dark exhibition space. Especially, the videos of blue sky and soundless flame on either side of the walls are overwhelming. The image of a huge mountain “Ametsuchi” was photographed during the annual “Noyaki” in Aso, 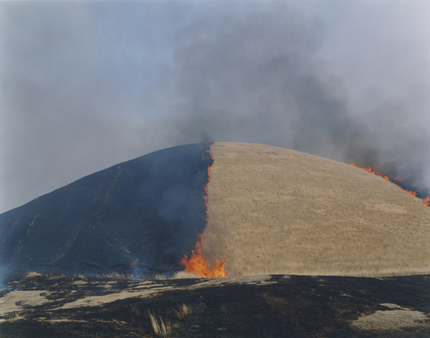 A photograph from the “Ametsuchi” series, 2012. © Rinko Kawauchi

Kawauchi said “when I stand on the ground in Aso, I felt that I was standing on the planet for the first time”. As I walk forward the screen which shows the images of Aso, I started to feel the experience. Mayumi Tsuruoka, a researcher of Art Civilization and a professor at Tama Art University, stated that noyaki is a 1000 years-old work of humanity. A human-being, who only can live on the Earth, sets fire on the ground and send it to heaven.

Moreover, at the opening conversation for her another exhibition “Light and Shadow” at TRAUMARIS, Kawauchi stated as follow.

–When I was a child, I wondered what the world was and what I was. I still cannot forget the thought. The fear, when I realized that I was standing alone, might be a foundation of my creation. It is a simple fact that we are just small and weak creatures who are standing on Earth. I just trace the world I live by taking pictures–. 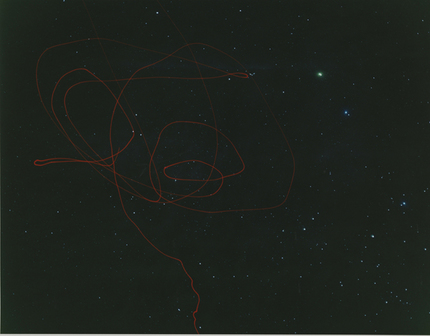 A photograph from the “Ametsuchi” series, 2012. © Rinko Kawauchi

After I saw the whole exhibition, I felt like I passed through a morning and night. The exhibition is filled with the totality which comprises all kind of light and shadow such as morning and night, implicitly and explicitly, and life and death. Kawauchi’s way of capturing time is not a one-way. There is a stream of time which forms a circle and let us feel the path connected from our bodies to nature, and to the universe.

At the exhibition “Light and Shadow”, Kawauchi presents the simple fact in a different way by showing the landscape of the stricken area from the Tohoku Earthquake and Tsunami. At the beginning, she was not planning to photograph the scenery of the stricken area, but ended up photographing by attending her fellow photographer’s visit to Tohoku. When she visited the area after the disaster, she strongly realized the fact that we were standing on the crustal plate along with unexplainable shock. An author, Mariko Asabuki, who was a guest for the opening conversation, described the feeling of being alive in this big world as “cruel” and “forlorn”. 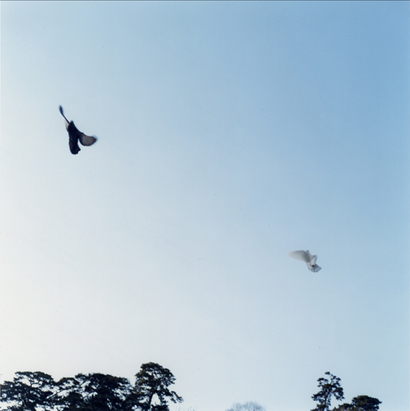 A photograph from the “Light and Shadow” series. Courtesy of TRAUMARIS SPACE. © Rinko Kawauchi

At the exhibition space, there is a small booth covered with black curtains. The viewers enter the booth one by one and see the slideshow of the landscapes of the stricken area. I could not stop chasing the images of two doves in the slideshow. Kawauchi said that she felt the duality in these black and white doves – for example, black and white, good and bad, light and shadow, man and woman, and beginning and ending.

While I was watching the slideshow in the booth, I felt a slight shock. But the shock I felt was not from the impression. It was more vague sense as I saw something universal.

As Kawauchi stated that she was just tracing this world without an intention of expressing her feelings through photography, she might hold her camera without being limited with her emotion. However, even though the camera is just an inorganic machine or the image is just a reflection of the simple fact, I was shocked that I, as a human-being, tend to have every eye fixed on other living thing. I could not take my eye off from the black and white doves.

The reason I could not call this feeling as an impression was because there was cruelty and the fact that I saw the universal sense of being alive in these two doves, rather than an impression or lyricism. Moreover it was the shock to see miracle that Kawauchi’s camera captured the moment. 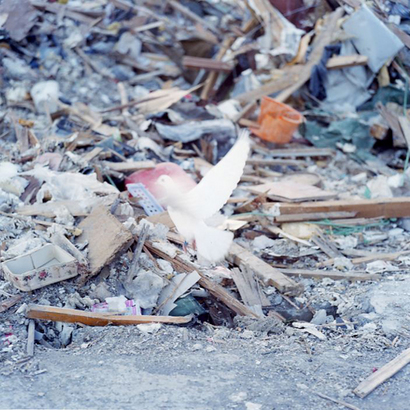 A photograph from the “Light and Shadow” series. Courtesy of TRAUMARIS SPACE. © Rinko Kawauchi

During the conversation, it was interesting that Kawauchi recommended us to flip through her photo book instead of observing each pages carefully. The way she flipped her book as a flip comic book reminded me that the beginning of motion pictures was the continuous pictures of a running horse by Eadweard Muybridge in 1800’s. I wondered whether Kawauchi’s photography had a motion picture-like approach.

I found a wonder of time-related art in this “flipping”. There are lots of mysteries to find out a shape and structure of memory and image in our brains. However, when an artist outputs the image as an artwork, they are expressed as a sequence of images. Kawauchi’s “flipping” images seems like “ a form” of something which was pulled out from memory. This is a reason which makes Kawauchi’s work attractive and mysterious.

Each image from the sequence is not just a still image from a video. We could feel that there was a moment she released the shutter one by one to capture our unstoppable world. The following words of Kawauchi indicates how she is facing to the world with sincerity by photographing.

— I am obsessed with the idea that we all still have a memory from our childhood and live with the past (…) Since it is very difficult to explain the connection between the body and memory, I try to face and assimilate it by producing work while I want to escape from the mystery and fear. It helps me to concentrate on a moment when I photograph. It is a moment I can be free without thinking about the future or past. I might just want to be free from the inescapable stream of time.

Through the procedures of shooting, selecting from the contact sheets, printing and editing, she projects her memory and experience on her photographs. Kawauchi calls this procedure as “tidying up” and it is her ordinary behavior to balance her life. The act of taking photographs might be essential for Kawauchi, and her subjects must be stupendous.

The work she called as “producing” is a series of sequence of post-production. It is a procedure to make her captured images visible like an alchemy. “After I repeat persistent work such as rethinking the composition and reshooting, the answer I was looking for comes to the surface of the picture” Kawauchi said. As she also stated that printing is a work to arouse her sense, a secret of her production is concealed under this depth. At her studio, undifferentiated matters such as timeless memory, reality and photographs are treated equally as materials. This chaos might be a factor of the attraction of Kawauchi’s work.

The photographs which are produced from her methods start to connect the fast-pace sequence. The continuity seems similar to the wonder of human memory. A “memory” is a wonder to make us think whether it is based on reality, whether it is edited by ourselves, whether we created it or imagined it.

Although anybody could take a picture, Kawauchi expresses something bigger in her photographs as she sees this world bigger. In her exhibition, among the images of ordinary landscapes, there are some images which were captured by the astronomical point of view and which indicate eternity. We glimpse the timeless landscape in which we forget time during the sequence of “timeless” landscapes.

“Illuminance, Ametsuchi, Seeing Shadow” at Tokyo Metropolitan Museum of Photography and “Light and Shadow” at TRAUMARIS were both held in Yebisu and I had a fulfilling experience seeing these two exhibitions. I would like to thank Rinko Kawauchi for giving me a chance to interview her, and Mariko Asabuki and Chie Sumiyoshi for giving me the benefit of their speeches. If you have a chance to hear Kawauchi’s voice in person for some events, I recommend you to participate along with her exhibition. I hope you could take a glimpse of “Iridescence”.