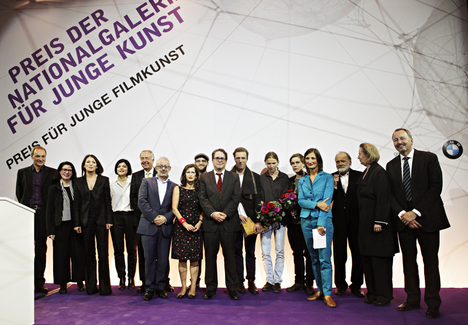 “National Gallery Prize for Young Art”（Preis der Nationalgalerie für junge Kunst） is an award given away to young artists in Germany. This biennial award is aimed at any artists, who are younger than 40 year-old and living in Germany. Nominee’s works are exhibited at Hamburger Hahnhof in Berlin and a winner receives the highest German contemporary art prize of €40,000. Despite of its rather short history since a year 2000, listed nominees in past cover various well-known international artists including Olafur Eliasson, Daniel Richter, John Bock, Tino Sehgal, Monica Bonvicini, Danh Vo, and Omer Fast. It is no exaggeration that this award picks a promising artist and anticipates a future of the art world in other words. The following rich international flavored artists were selected as a nominee in 2011. Kitty Kraus, Klara Liden, Andro Wekua, Cyprien Gaillard. After underwent a final screening, the award was given to Cyprien Gaillard. This is an introduction of promising artists from Germany to the world as well as a report on their exhibition. 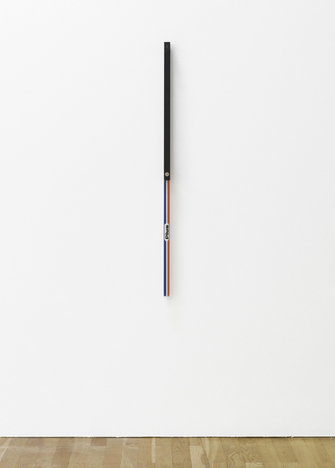 Probably, the most simple artwork was submitted by Kitty Kraus, who was born in 1976, Germany. Her glass work stood out in contrast to its simplicity that the material embodied. An unusual shape was apt to be overlooked without approaching because of the nature of transparent glass material. One edge of the glass plate was lifted about 20cm and the plate was unnaturally bended. It gave a psychological tight feeling as if it was about to disintegrate itself. However, this is not only things that the work conveyed but also it referred to the contemporary artwork in past. To begin with, an artwork of glass plate reminds Richard Serra in terms of approaching or handling a material. It reminds a well-known episode of “freedom of expression” as a case was filed to remove her artwork in public space because the work was said to give a psychological tight feeling to the neighbors. In addition to that, this was not exhibited this time but there is a work of colored ice cube with a light bulb inside, which draws a pattern on the floor as the light is on and the ice is melting. An extending cable from the cube exactly brings back the memory of a tape recorder covered with concrete by Bruce Nauman and a heat-transfiguration even recalls a sculpture concept by Joseph Beuys. To quote art works from 60s and 70s could add multi-layers to her piece in this way. Furthermore, her work is not made up of quotes from the past but its fragile beauty itself enables to create a breathtaking resonance with background contexts. 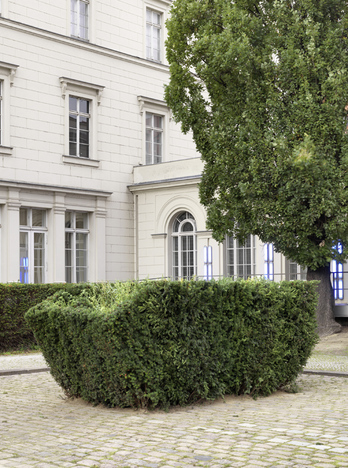 On the other hand, a 1979 born Swedish artist, Klara Liden, extended her works not only inside but outside the building and drew the line from the other artists. A monitor in the exhibition room shows a quite simple space with a desk and a chair along with a trashcan. One female is sitting on the chair in the monitor and she stands up slowly and quietly walks to the trashcan beside the desk. Then she unexpectedly starts thrusting her head into the can eventually her entire body disappeared into it. This is performed by the artist herself and her performance gives an impression of mixed preposterous and mysterious feelings. In the courtyard of the museum, there is a big dumpster that can been seen anywhere in Berlin. This gigantic 1 meter high, 2 meters wide, and 1 meter deep box is usually placed at a construction site and used for dumping wastes. A big difference from the original is that it is made of plants. The closely trimmed plants like a garden tree cannot be dumps and it rejects to function expected from the appearance. A rejecting attitude like this is a key factor of Klara Liden’s artwork and it can be seen off and on among her works. Another her work, which isn’t on show either, is to radically transform a public space to a private space by ignoring a meaning of a public while dancing madly without caring other people in a train. Once she brought her furnitures from her apartment into the gallery, and she also disabled a function of “museum” by blocking the entrance to the showroom. This is how she suspects a system and a structure of “the public” that we ordinarily accept. As a “rebel” she is, she voices an objection to our unconditional acceptance and she hammers it out. 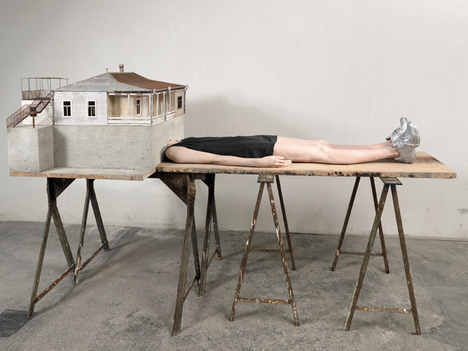 A highlight of the show was probably a work by Andro Wekua. This Georgian artist, who was born in 1977, exhibited a video art and an installation piece. He creates his own world that leaves a strong impression on a viewer while taking a novel approach. A picture appeared in a low lit room. At the same time, a spotlit elaborate human figured sculpture caught your eyes in the room. A whole body is strangely covered with precisely built model houses except a face. A life-size human sculpture and tiny buildings. Despite of their sophisticated reproductions, it is a very surrealistic because of the odd combination. Then look at the video. Again, an unreality appears in the actuality and they both queerly become the fusion same as the installation. For example, it shows an apparently impossible circumstances with real people in the excessively established computer graphics world. However, it is hard to fix the boundary between the reality and the unreality, therefore, a whole scene seems to be able to be either a fiction or an actuality. Lately, he has participated many international exhibitions. His “memory” is given great weight in his works and it recalls his history of leaving Georgia during the conflict and even hidden parts of his life as well. For instance, his model houses are a reproduction of his hometown, Sukhumi. Because of depending on his memory, many of the buildings have only facade. This group of buildings without the general picture indicates his memory, at the same time, it leads a viewer into a story mixed with reality and virtuality. First and foremost, a reason why his work is not just his history is no other than a fascination for a virtual story based on a completely changed reality with a sort of eternity. 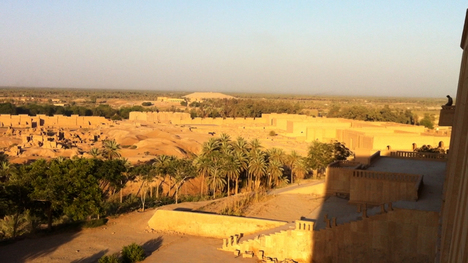 In recent years, Cyprien Gaillard (b. 1980) has been remarkably active participating large scale international exhibitions including Venice Biennale and Berlin Biennale as well as having a solo exhibit at a modern art museum “KW” in Berilin. He puts his masterpiece on display as expected. A French-born artist displays his 33mm film work and shows a desert, a relic, ruins, a museum, and so on along with warmhearted music. Most of them a scenery of Iraq. It succeeds to convey a sense of transience that indicates a civilization cycle after a city is destroyed and becomes the waste of land not only by focusing on a war-scarred city but also by capturing an ancient civilization at the same time. The artist deals with a destructive process as his theme and takes an approach to it with diverse medias including visuals, outdoor sculptures, photos, and installations. One of his masterpiece is a pyramid made of beer boxes exhibited at KW. Because visitors are allowed to take a free beer, the pyramid is finally destroyed by their desires. Hundreds of people visited the show and the venue became a bar in the opening. The work involved many people and the closed place of museum was opened to them. On the other hand, to select a Turkish beer reminds a current Berlin’s key resource of tourism, Pergamon Altar, which has been transferred from Turkey to Germany. We must not forget that it draws a picture of the great powers in 19th century as well as an economical position of European countries in 21st century in terms of their “desire”. The award went to Cyprien Gaillard, who has caught an attention with his political theme not only art people but many others by sharing his image and being able to enable them to approach the theme which tends to be difficult on daily basis. This has been proved by the fact that he delivered the majority of visiter’s vote. His work itself has a fascination attracting many people even without understanding a background and then it leads them to face various facts behind it such as “history” and “desire” beyond an interest on the surface. No quarrel with his win. 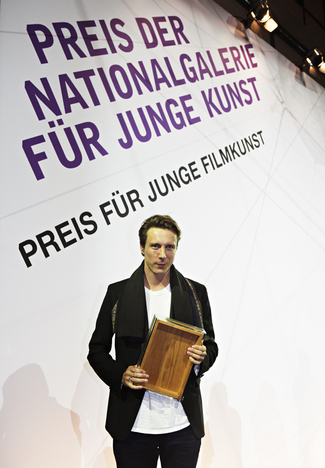 Probably it sounds like nonsense to mention about substance of the show which has no concept more than to exhibit nominee’s works. But, lastly, I would like to give a couple supplementary explanations about the show and the award. On the whole, the show has an aspect of a contest since it is a comparison of each work on surface rather than bringing out the best in them in the same condition except modestly gone beyond Klara Liden’s work in the courtyard. Each individuals with high qualities at the show also give a strong feeling of deja vu and no futures. This is not only about the display. More than anything else, it is about a statement on their official website which says it is not their intention to nurture the youth even they require a nominee should be younger than 40 years old. It can be read that they only award a young establish artist rather than taking notice of their great capabilities. So far as the exhibition is concerned, all nominees are not young newcomers. On the contrary, they are already pretty much established artists. In addition to that, whether this award was able to capture the latest stream of the time is open to question even though it is safe to say that “young” is a synonym of “new” in the contemporary art world. In fact, the award should have more potential to find a new art movement in comparison with other major contemporary art prizes in other countries because it is aimed at comparatively young artists. For instance, the UK’s Turner Prize is presented to British artists under the age of 50 (a British nationality holder only), and the Hugo Boss Prize in the US has no restriction on age (on nationality either), either one is not intended to particularly feature a young artist nor a new movement. In any case, questions have arisen about an age restriction for not pursuing something new and possibilities. With seeing a contradiction, there is no clear vision confirmed at the show. The next award in 2013 raises all the more an expectation for exploring a young artist with the future and the possibility.