Makito Takagi’s illustrations are meta-visual characters. They seem to have inherent superpowers and are set in ordinary scenes using simple colors. His illustration chosen for the cover of SHIFT 2012 calendar is a depiction of what he says is a “snapshot of a character”. One question comes to mind; what if, we were all recognized as a symbol? His works make one think “I would like my inner superhero character drawn!” He also takes part in an artist collective called Oruta we had a short interview with him. 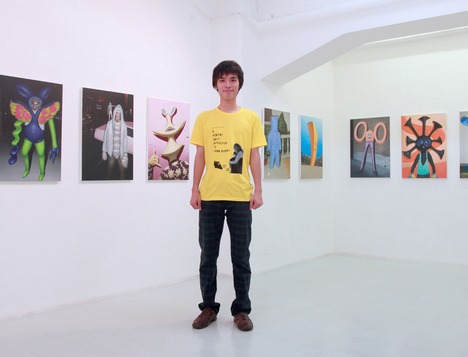 Would you mind introducing yourself? 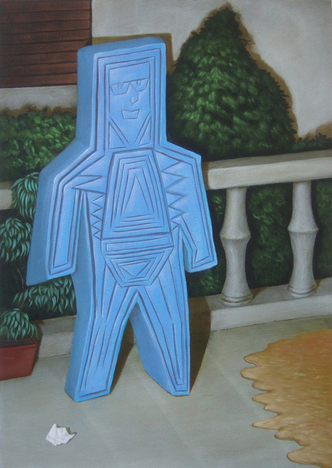 You have unique view of the world in your illustrations but are there concepts for each ones?

I decide on the setting, but other than that, I don’t tend to let it have a meaning further than that. However, I sometimes put my feeling in the backgrounds, patterns on the character, or its clothing in a code sort of manner. 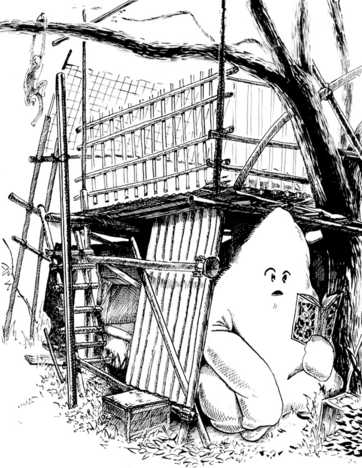 How many illustrations do you draw in a day?

I draw about 10 pages maximum and at least a page in a day. I draw in a train or when I find time. I don’t feel so comfortable not having a pen or a notebook in my bag. 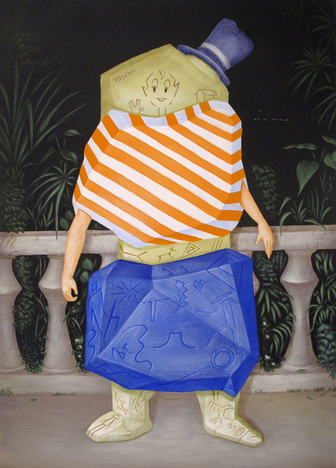 Do you have a favorite artist?

I like artists that work with multiple mediums such as Shinro Otake, Vincent Gallo and Cornelius. I’m drawn towards craftsman kind of artists, who do covers for pulp magazines or signboards for movies. 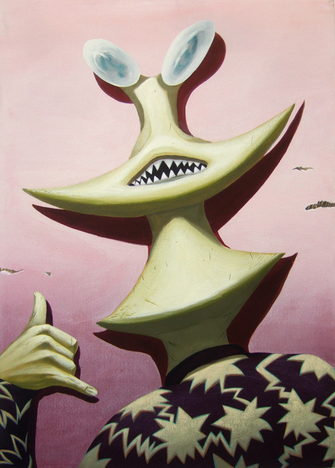 What do you consider important when you produce your works?

In my paintings, I try to keep an event like interpretation of a strange character preserved in a picture. I give a character a name or particular settings, I steer away from scenes where two characters are communicating, keeping in mind to have a certain distance between them. I conclude that world in one painting and try not to paint the same character more than once.

In my drawings, I make sure that I create what came into my mind without thinking. 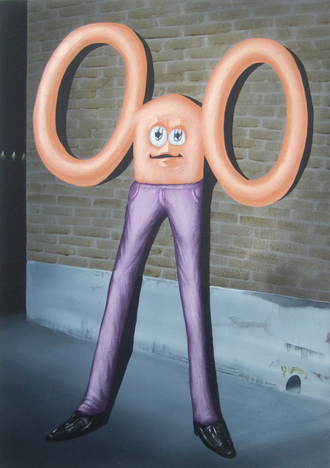 I’ve always liked thinking about imaginary rooms and their interiors, CDs and books that may be there, posters on the walls, and so on. I am fond of drawing structures of things like buildings as well, so I always try my best to draw them. 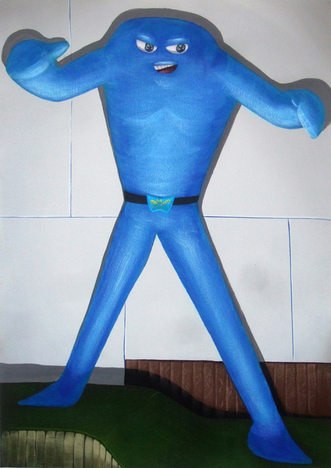 An idea of ‘depictions of a snapshot of a character’, where did this come from?

I was looking at fashion snapshots in a magazine and thought it would be humorous to depict something like that as weird, not even fashionable. That was the trigger.

Also, at that time, I was studying how lights and shadows of motifs that are shot with a flashlight are depicted. This inspired me to create representations of a snapshot of a character as a theme of my paintings for the reason that it went with that study. 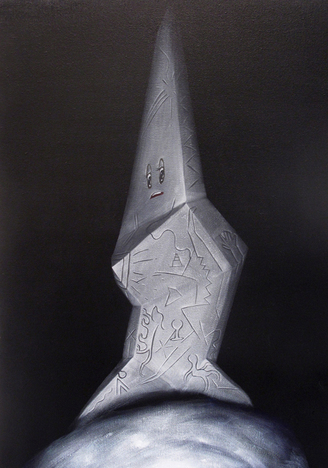 Just like how a character is an abstraction of certain person’s characteristic, is there an existing human model?

At the drawing stage, I am not aware of a particular person to design. However, as I start painting, it starts to look vaguely like my acquaintances, or I start to know characteristics of the character, so there might be an existing human model in my unconsciousness. 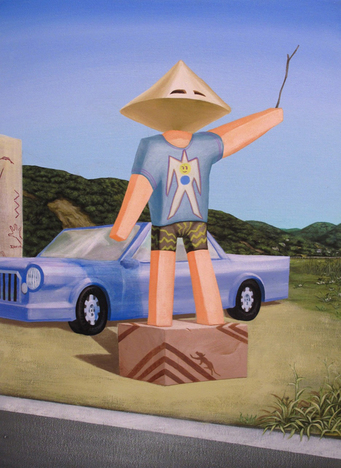 Please tell us about the work for our calendar. What kind of story is there?

It is a painting, in a setting from a photograph that captured this weird fellow, taken from the car window as I was on my way to my grandparents’ hometown. Raising a hand under a clear sky like jabbing, waving a tree branch. It must be a hitchhiking story, but comparing him to the car in the background he’s kind of bulky. Is there a car that fits?

You have also produced a new work for a cover design of SHIFT. Please tell us about this as well.

He was found in a café eating curry I took a photo because he was wearing a nice T-shirt. That is the setting. The cube object is a hat. The lithograph displayed at the back was drawn imagining a ham and a lettuce.

What do you do at OLTA? What is the origin of its name?

In OLTA, we create a work together with a theme that is linked to matsuri (Japanese festival), Japanese culture, and soil. In the most recent work, we attempted an expression where the members blend into the work and construct a space and a situation. Our representative piece is called Tsuchikure No Hokora (English title: Soil Shrine) it received the Taro Okamoto Award in 2011 (Taro Okamoto Award for Contemporary Art). We also have an exhibition until October 3rd, exhibiting documentation videos and works of our performance titled Yubi Choukoku (finger sculpture) that was performed from September 23rd until the 25th, at Okamoto Taro Memorial Museum. OLTA has a meaning of our selves becoming a thick pipe that can connect the root that has produced art in ancient times to the present.

What is your childhood dream?

I was always reading Japanese comics (manga) in my childhood and I wanted to become a comic writer. My books changed from comics to art and design magazines as I got into junior high school and high school. I got far from comics but I think it is a remnant of my childhood dream that I use dip pens and ink to draw.