Most of people named “Hideki Iinuma” as being asked about a noteworthy artist at an art fair “TOKYO FRONTLINE” this February. That was his first show in Japan after he had studied and worked in Europe. Walking lady figures before a vivid pink background leave a striking impression on viewers. Photos of these models from the street are displayed on the side. Is this a part of voyeur? Anyway, these sculptures are surely completed in a formative prospect inconsistent with their light plastic impression at glance. Who is an artist that brings all these up? With a rising style as well as one and only presence, he is a quite mysterious artist. We approach his true nature while asking his heart to his work and stories behind them in this interview. 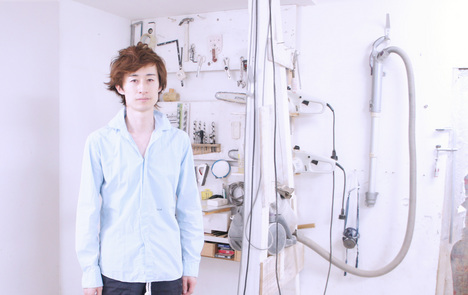 When did you start making a female wooden sculpture in the current style?

I went to study for a year in Paris while being absent from graduate school at Aichi Prefectural University of Fine Arts and Music in 2000. After graduate school, I went to University of Nantes in Brittany to study. What I learned there was that any work that was created in accordance with the rule of western arts could be interpreted correctly without taking the trouble to add any explanations. Since there were no departments, I had opportunities to learn performance, movie, photography, and computer graphic. Each artist studies the western art history and he is always aware of ranking his work in it as well as an artist who has influence on him. It was when I started working in my current style as I met a new sense of value. 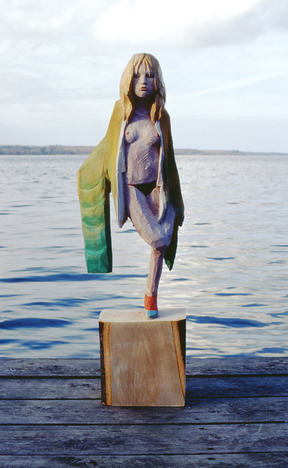 You start making a sculpture only with your picture without making a rough sketch, however, how do you collect material for it?

In a sniper series “TOKYO FRONTLINE”, I shot women walking down in the street in Japan. A reason why I use pictures particularly is that flesh and blood does not help me to stir my imagination and rather to lose my strength. Or I can say that I easily become too conscious to work. Therefore I have never chose somebody close to me as my model nor had a model stand nearby like one in an art class. My model that I selected was nothing to do with me in my real life but who gave me some positive inspiration at sight. 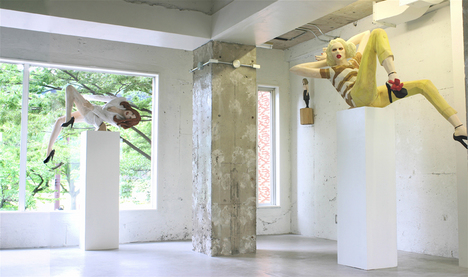 You featured a photo from fashion magazine at your recent solo exhibit “A Beautiful Women” at “XYZ collective” and “SLANT” (Kanazawa).

A theme for the show “A Beautiful Woman” is a fashion and a beautiful woman. Motives are selected from fashion magazines. I chose photos that symbolized a modern female among them. Since a pose and a garment have always symbolized a robust body and authority like a Greek sculpture or Unkei and Kaikei, I express my imaginary beautiful female in this way. 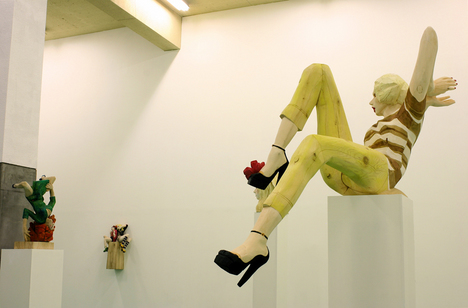 Do you feel deeply attached to the fashion?

In an ever changing fashion trend, I would like to take a notice of things that becomes outdated and thrown away, which represent human desires and social metabolism. Even my motif comes from a fashion magazine, I didn’t know anything about an actual site in fashion. So I went to a fashion design school in Milan, 2003.

I leaned to design shoes and T-shirts’s collar at school and other students put non-fashion elements like architecture into their designs as motif. It was a very fresh idea for me to see designing with eroding other medias. I put an experience that I got while working close to Milan fashion shows to good use of my current expression. And I am always attracted to the latest fashion scene.

Through your colorful pop touches, your works might suggest Japanese pop culture in abroad. Are you influenced by Japanese anime or manga cultures?

Certainly, there were that kind of responses in France. But I don’t think I am. There was an anti-pop oriented trend around while I studied in Europe. I tend to have people understand my works in a different deepen direction rather than manga or anime. 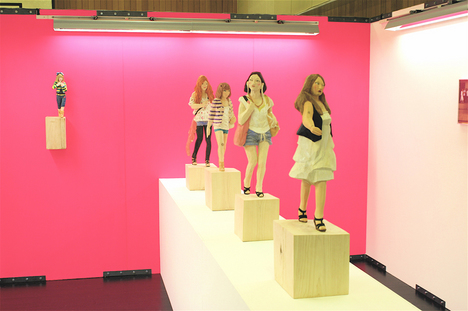 How did you challenge your solo show, “A Beautiful Woman” after your Japan debut exhibition in Japan, at “TOKYO FRONTLINE”?

I named my show “Sniper Series” at TOKYO FRONTLINE because of its possibility to be able to incorporate with an event-like-topic in the nature of an art fair. It is quite thrilling to take a picture without being recognized by a subject. It is a brush with the law to take a sneak shot with a tiny camera. So I took a picture respectably with my single-lens reflex camera. I sculpted both eyes that woman who dolls up and has a desire to be seen as well as one of mine who wants to see her in the street. I guess I found the way out by having an ordinary woman whom I “shot” in the street walk on catwalk in my show.

In the exhibit “A Beautiful Woman”, I chose to express a beautiful female by making a self-portrait of lady in myself. By twisting myself of manly side that attract females and another myself who envies a beauty of females, I was able to succeed to draw a modern society whose aspects include womanly roles and manly roles as well as masculized females and feminized males.

I select some models from manly macho point of view, on the other hand in stark contrast to it, others are selected from lady first in praise of them sort of view. During a talk with Mr. Satoru Aoyama (contemporary artist), he asked me if I had a transvestism. But I am not trying to become a woman just trying to materialize consciousness of each gender by seeking the feminine gender. 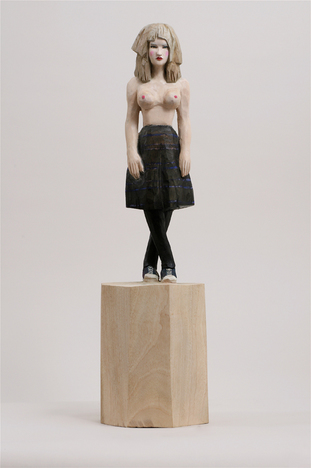 “A consumption society” is one of your motives. Is it your key motif?

To begin with, a magazine is a symbol of our consumption society, which is thrown away after read over. Especially fashion magazines. They are printed and discarded in for craze. I am rather attracted to their transient lives than showy fashion itself. At the same time, a model goes through a same life span. I interpret it to be a “Beauty” that female embodies.

However, I start feeling that it might be an outdated idea to have a consumption society as my motif after TOKYO FRONTLINE in February. A revolution that had stemmed from Facebook in Egypt made me realized that “consumption” is not a major factor in the oncoming new era just before the exhibition. Then the earthquake disaster overturned the values of our society. The words sound a little apathetic by now.

Did 3.11 leave a large impact on your production?

I was filled with a stab of guilt running away from Tokyo after moved to my relative’s house in Osaka with my family on March 15th. I was thinking about Taro Okamoto and Tsuguharu Fujita who came back from Paris to Tokyo in World War Ⅱ as well as Kiyoshi Hasegawa and Pablo Picasso who stayed in Paris. Kiyoshi Hasegawa kept printing while being sent to a concentration camp and I assume that Pablo Picasso had a hunch that it was a real art to stay there and to keep painting while never bowing before authority. This thought helped me to make a fresh resolution to go back to Tokyo and keep on working.

There was an indication of the nationwide risk that could be caused by a news report which had been hiding some truth concerning serious nuclear issues in Fukushima. It is a time for me to think how an artist stands against the authority in order to obtain individual freedom of expression. Since 3.11, I feel being asked for my strength to keep producing just like I did before, at the same time, I also feel a sense of guilt on what I haven’t changed. 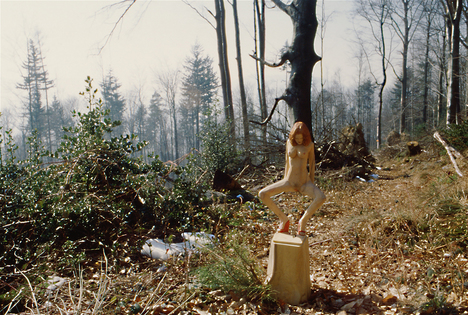 How did you finally end up for making your work in Japan after going through your activities in Europe?

I have been wandering studio to studio in several countries for 5 years and decided to come back to Japan in order to lay the foundation for my life including my home and my studio. It takes quite long time to reach deep understandings and it is not that easy to have a conversation with a full understanding of their mentalities and cultures while using my imagination, though, there are many new things that can inspire you in abroad. Once I met Simon Starling (contemporary artist) at a workshop of design college in Denmark. He told me “You don’t have your original language”. I thought I could speak both English and French but then I realized that I was able to appreciate things and deepen my thought by thinking in Japanese. It is the best for me to select Japanese to convey my concept directly, I guess. By translating my concept throughly in Japanese, I would like to confront the world.

Tell us your favorite artist or an artist who influenced you.

A German artist, Georg Baselitz, is the one who always gives me something on my mind among all various art works in Europe. He makes me wonder how he can reach the perfect beauty with those violent touches. The more researching about him, I learned more that there is a “anti-skill” kind of art without clean finish in art history. For example, talking about Gauguin and Gogh. If you assume Gogh was a mentally disordered person – of course I do not think he was that crazy – you think a person who interpret him was Gauguin and what he painted influenced Les Nabis then Die Brucke who painted people in the abstract manner. That was followed by an avant-garde movement, COBRA, in Copenhagen, Amsterdam, and Brussels. And one school applied violent brushworks that implied the recovery of humanity. Jean Dubuffet followed next. I think he painted interrupting an unconsciousness of human beings and childishness into his works. Bazelitz is in this tide. He is able to accomplish with his violent touch because he collects pictures by children and mentally disordered people and does just I mentioned before. I would like to carry my roughness as well as clean finish skills like a make-up while being aware of where I belong to and where I intend to belong to in the art history.

Does your theme toward feminine beauty continue from now on? Or is there any new one in your mind?

Yes, it does. For instance, a gene that works between man and woman attracting one and another or an instinct of animals in conception. I have my mind on collaboration with photo, fashion, design, street and pop cultures.

Hideki Iinuma
Born in Nagano pref., 1975. After graduated from Aichi Prefectural University of Fine Arts and Music, entered University of Nantes in Brittany (France) and while participating European Community Action Scheme for the Mobility University Student (ERASMUS) he studied at the Royal Danish Academy of Fine Arts, the New Academy of Fine Arts of Milan, and Karlsruhe University of Arts and Design. He carried out his works after his graduation while winning the first prize at International Sculpture Symposium (2004 / Germany) and Ernst Barlach prize (2005 / German). Currently, he lives and works in Japan belonging to “SNOW Contemporary”.