As one of the “it” contemporary artists drawing much attention, Makoto Taniguchi‘s “Anime” exhibit is receiving praise from all quarters. The exhibit is open till April 14th at Shibuya’s SUNDAY ISSUE. In addition to his usual work using mirrors, Taniguchi has added flat pieces and drawings. 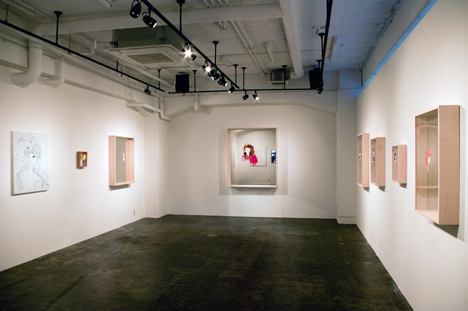 When asked about the exhibit’s striking title, the artist explained, “it includes a view of life, a way of looking at life and existence.” The word anime can be associated with “anima,” which is the root of “animation” and related to animism, as well as the popular Japanese anime. 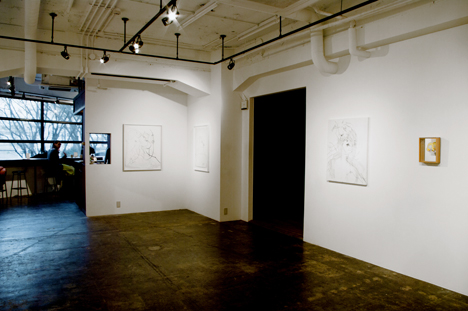 What Taniguchi’s works express is the human “view of life” and “the process of recognizing and expressing such views,” especially that which exists among Japanese. Taniguchi only uses images of girls. The transience of girlhood and the momentary radiance that girls emit, as an “icon of life,” closely relate to his style of expression. They take on the images of girls, but the images are an ensemble of all the people he has met, and represent human existence in general. 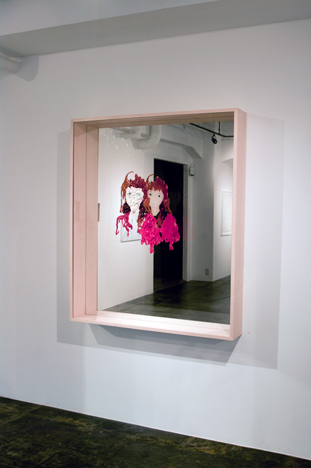 The girl who appears inside the mirror on the other side of the acrylic board exists within us, very much alive. But the globs of paint that are piled up on our side of the board are merely material. This incomprehensible reality forces us to ponder the phenomenon of being. These works are a visualization of the expressive processes of images that exist within humans, and they evoke the wistfulness of the ephemeral frailty of life, which crumbles the moment images that exist in reality are given shape (physicality increases as more paint is applied). 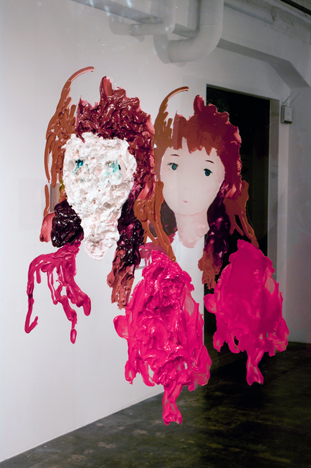 The piece that attracts the most attention in this exhibit is the one with the giant mirror. The girl drawn on the mirror is almost life-size, and it is the largest among similar types of works. This piece was created immediately after the disasters of March 11th.

The girl, whom the artist says, “may resemble my mother,” approaches our side of the mirror with unprecedented strength. One cannot but help to empathize with this transient, sad image. “Mother” is the first person against whom everyone confronts. The most primitive view of life for the artist may be reflected in this artwork. 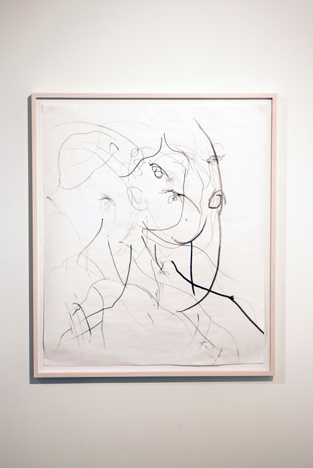 Using only one side of a stick with pens on both ends, a picture is drawn. The image depicted by the pen on the opposite end of the stick is unstable and unclear. Actions that repeatedly attempt to clarify existence, in order to recognize the subject matter, end up firmly expressing objectivity.

For example, conveying non-existent air and worlds that waft and drift around words, as in haiku, has always been a traditionally Japanese method of expressing “empathy.” Similarly, the phenomenon that exists within an artist’s artwork is not a direct expression, but instead, leads elsewhere. Between the image of the girl in the mirror and the physical material that is paint, we may be able to find a clue regarding our view of life and our recognition of those views.

Taniguchi’s works continue to question the wistfulness that comes with attempting to extract an intangible image, and the mystery of our sense of existence.