“We would like to be SAIZEN 00, the hottest culture in Japan today!” Fantasista Utamaro, who is actively working in various fields such as illustration and animation, organized a super dimensional cultural event, ‘SAIZEN 00’ (front line zero zero). He called upon Mofuku-chan, the CEO of Moe Japan, fashion designer Mikio Sakabe, and Toshiyuki Sugai from Semitransparent Design, among others to participate.

* ‘SAIZEN 00’ is an Otaku term used in the idol scene that indicates a situation wherein the Otaku is at perfect harmony with the idols who stand at the center of a concert’s front line. 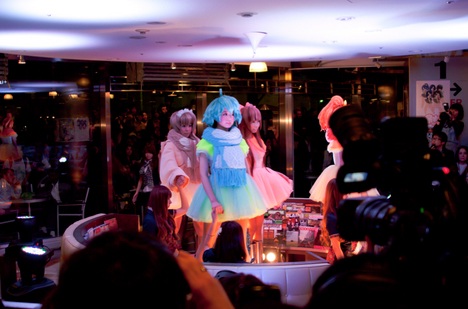 The members of Denpagumi,Inc dressed up in brightly colored costumes designed by Mikio Sakabe. The costumes were reminiscent of those worn by Anime characters. They wore very unique headdresses and long straight golden boots with no curves around ankles. Their appearance in such unique costumes was very overwhelming and unforgettable. Although the event was also a fashion show, the hardcore Otaku (Top-Ota) filled up the front line of the audience. During the music performance, the venue was filled by Denpagumi, Inc. and the Top-Ota’s wild energy. 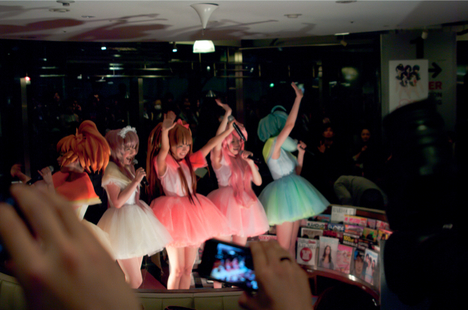 Even people passing alongside the venue were unconsciously compelled to stop there. After all, the crowd overflowed from inside of the venue to the outside. The future possibilities born from the fusion of multiple cultures such as fashion and Akiba at this event proved inspirational. The crowd also found excitement and happiness from theirs moments of sweaty union.