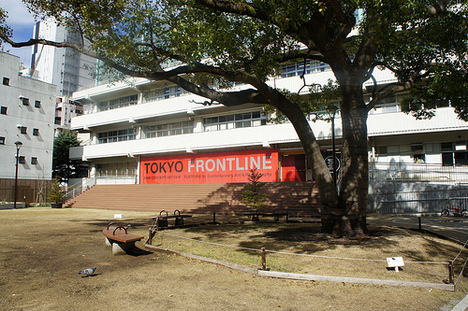 Held for the first time this year, the international art fair “TOKYO FRONTLINE” opened
at “3331 Arts Chiyoda” in a closed school building transformed into an art center. A thousand of people turned out for the opening on February 16, 2011. This time the focus was on young artists emerging as major players in the art world. Even though there were no big artist’s names listed for the event, many visitors appeared at the opening. So what is attracting all these young people? 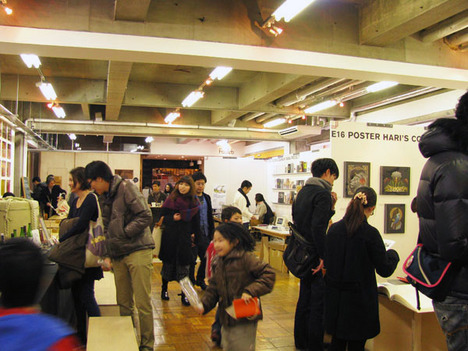 The fair consists of three different sections. The first of these sections is called the “FRONTLINE”, composed of 38 artists. The organizers of this time, Shigeo Goto and a magazine Bijutsu Techo, selected up-and-coming artists that received much attention, including Hiraku Suzuki, Kozue Takagi, and Yumiko Utsu.

In the second section, many genres came together to create the presentation booth, “EXCHANGE”. It included names from home and abroad, such as +81 Gallery+Lab, G/P +JAXA+IDÉE, TOKYO CULTUART by BEAMS, and the TSUTAYA DAIKAN-YAMA PROJECT.

Set in the old school gymnasium, the third section is entitled, “GYM”. There you could view twenty gallery exhibits, including g³/, Misa Shin Gallery, and the Emon Photo Gallery. This time the fair also heated up with the addition of awards. Judges included Kishin Shinoyama, Takashi Homma and Fumio Nanjo, with the goal of discovering new talent and establishing support for artists. 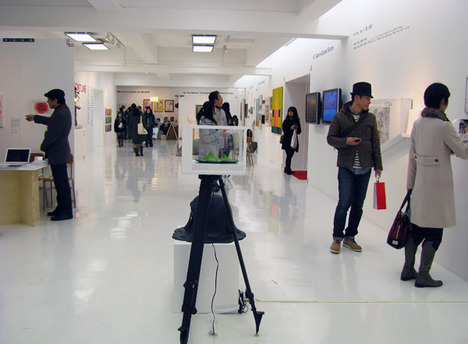 Now let’s take a peak of the fair. After you ascended the wood deck of entrance stairs, you’d find yourself in the entrance lobby where the atmosphere came alive through a café and booths of the Nanpu Shokudo and Akita Seishu. As you continued further into the back, the whiteness enveloped the room and you completely forgot that it was once a public junior high school. The airy atmosphere of 3331 Arts Chiyoda was a match for an art gallery that is nurturing contemporary
artists. 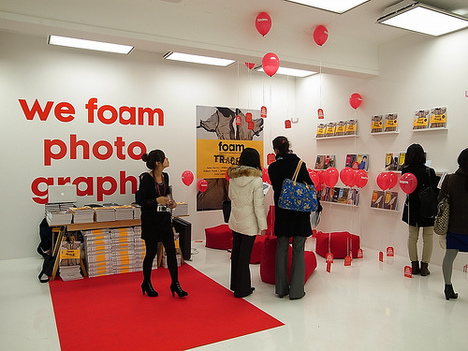 Foam introduced a photo magazine from Amsterdam. Adorn with red balloons and cushions, one’s eyes were drawn to the tall figure of the magazine’s male representative. Although I think many of you already know, Foam is an organization that operates a photo gallery in Amsterdam, and the contents of the magazine itself have an edge. 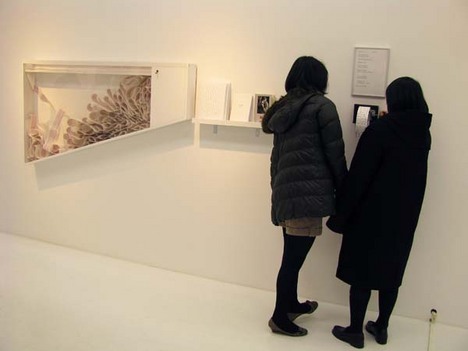 The paper-made piece that everyone gathered around was the work of Taiwanese artist, Mia Wen-Hsuan Liu. Amassed in the glass box, the paper was beautiful. On this paper, Roland Barthes’s La chambre claire, has been transformed into Braille text. Furthermore, when you turn the handle on the music box, you can hear music coming out from the Braille. Sense or memory, love and thoughts were quietly revealed, almost as if they were spun, through this mysterious piece of art. 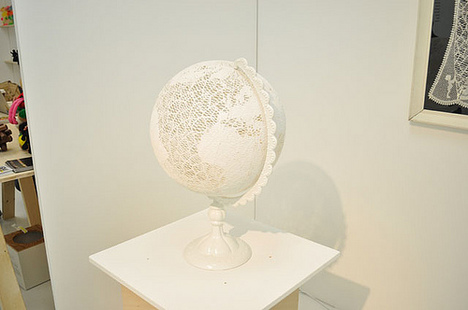 Yoshikazu Yamagata, the fashion designer, can also be found. After graduating at the top of his class at Saint Martins, having worked as John Galliano’s assistant, and featured in the Tokyo Collection, Yamagata is clearly working beyond the bonds of fashion by creating works including 7m’s bra (A LONG STORY, 2004) and conducting a fashion show at a nursery school. At the fair you could view the first work of the label, “writtenafterwards”, founded by Yamagata. Made on all sides from lace, the “Lace Globe” cannot be a work from the mass-produced fashion items. With the life-like work entitled “the Lace World Map”,
Yamagata expands the globe and weaved intricate detail that allowed our eyes to glimpse a superb dream. 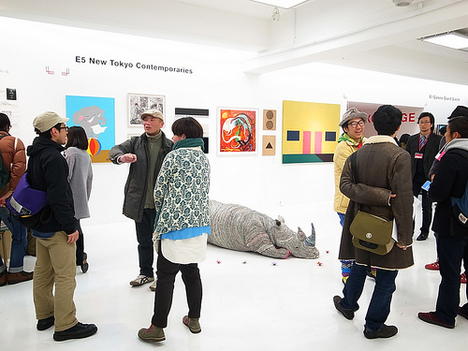 Takahiro Komuro, who began to receive attention during his time at Tokyo University of the Arts, and surreal cuteness of media artist, Teng-Yuan Chang, are just some of the many artists I would have also liked to introduce to you. 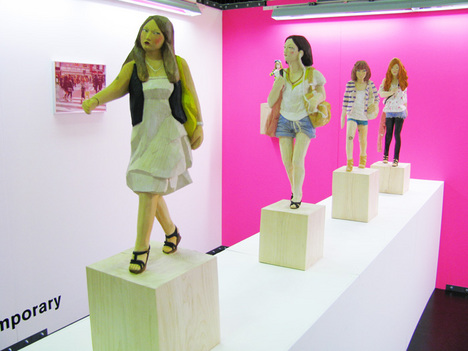 But let’s move with a few brief steps up to the 2nd floor. In the space that was once a gymnasium, red carpet was laid out and transformed it into an exhibition center. Snow contemporary’s Hideki Iinuma was at the entrance to lively welcome you. On first glance, the figures seemed to give a plastic impression, but they were actually wood carved sculptures. The fair was his first show in Japan after working in Europe. With precise craftsmanship he saved the figures wrapped in the latest fashion from the ordinary, and successfully took away the figure of a real modern woman. 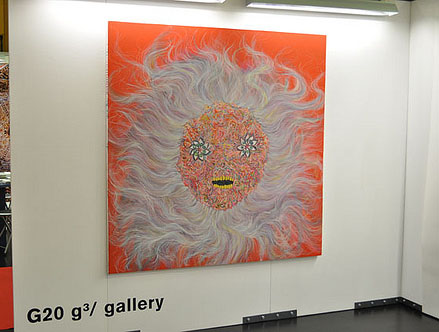 The overwhelming presence that cannot be ignored was Hyongyon’s（g³/）”Super blue”. His work gave off a strong primitive, but fresh light. Hyongyon’s work resonated with underlying primitive power, and in modern times, his rare spirit took in “now” and exploded on the tableau. 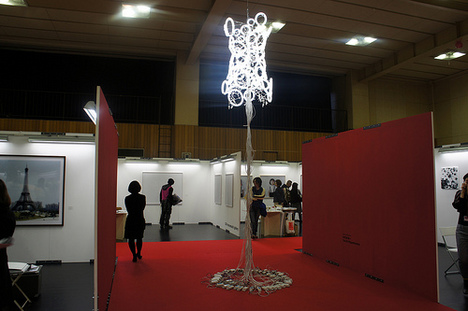 In addition, with artists such as Yuichi Higashionna’s illumination artwork, Emon Photo Gallery’s Osamu Yokonami, Marunouchi Gallery’s Jean Claude Wouters placed in the center; the GYM Selection was stimulating to the point that it couldn’t be beat by the first floor. 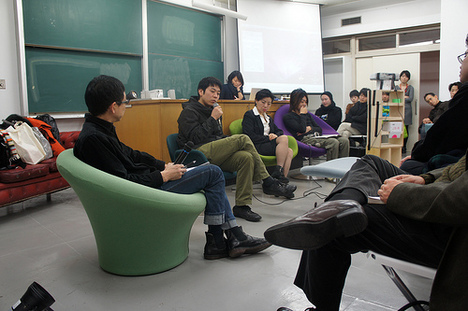 This time various special events with guests such as artist, Kohei Nawa, and philosopher, Masaya Chiba, were held daily. On the day that I visited, there was a discussion between Shigeo Goto, Communication Director, Chie Morimoto, and scriptwriter, Mitsuru Kuramoto, and I was lucky enough to be able to view it.

The three speakers talked about the pieces that they liked and the pieces they wanted, and the excitement of the visitors of an art fair that begin to want to buy the pieces they are viewing, which is a little different from how viewing artwork in a museum. In contemporary art, emerging artwork is valued. Art fairs allow visitors the fun to be able to think about obtaining the piece of artwork that they are interested in or being able to give it as a present. Kuramoto’s words, “Buying something is also a part of contemporary art”, made perfect sense to me. Finally, after that, Mika Ninagawa, who was also an unofficial participant, brought the discussion to a successful end.

TOKYO FRONTLINE came onto the art scene for the first time, and has gathered an
even greater following as the “happening” festival. The festivities may have ended for 2011, but you can still catch information on the 38 artists introduced on First Selection through the iPad application.

Additionally, the sound and visual competition, “Sound & Vision Award” is planned to be held in the near future. This event is attached to the Ryuichi Sakamoto label, “commmons”, and looks to discover the next generation of artists. In that way, this year’s TOKYO FRONTLINE is not over yet. Without waiting for next year, the organization seems to be working on various activities to show us.