The formula to Open House 2009. Step 1) Take 5 homes and put art into them. Step 2) Invite the whole neighbourhood. Step 3) Invite everyone else. Step 4) Make sure the beer is readily available.

The formula to Open House 2011. Step 0) Venture into the heartlands. Then follow as above. 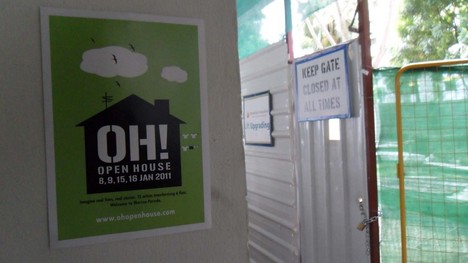 It almost seemed like a natural choice to extend the concept of art in peoples’ living rooms from last year’s pre-war shophouses into the heartlands. After all, 85% of Singaporeans live in public housing. A familiar sight and a familiar setting to many.

Yet Marine Parade is not your typical housing estate. Located by the East coast of Singapore, it fronts the sea, across from East Coast Park. Not a view that many other estates can lay claim upon. These 58 blocks sit on reclaimed land, where the previous shore line can be vaguely made out from the low sea wall and drain (or so, it is often pointed out).

It is with some notion of familiarity that visitors lay claim to the 5 flats on showcase. It is after all just another housing estate. Or is it? It is not just the visitors who are encouraged to be voyagers, but the artists themselves as the process of engaging the space and their owners, as a means to inform the artworks on display. 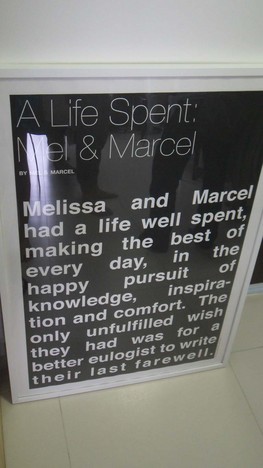 Young Artist Awards (NAC) recipient Michael Lee contributed a series of pretended eulogies for the owners of the flats. Framed and leaning nonchalantly against the wall, they would have gone unnoticed if one did not look hard enough. Set amongst the belongings of the home owners, they give hints to the relationship between the objects, the space and the aspirations of the owner. If you were lucky enough to meet the house owner on the tour, you may even nod in agreement with Michael’s description and wonder about the extension of the reality into a pretended future. 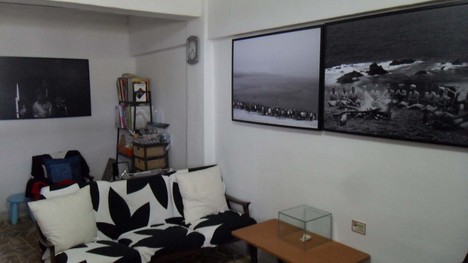 Young Artist Awards (NAC) recipient alumni Zhao Renhui’s extends this pretension with photos of “apparent” sightings of dolphins off Katong coast. Their existence supported by the presence of an encased dolphin bone relic. Located along the sea, surely there must have been some form of marine life no? Thus begging the question of myth versus reality. In such a manmade setting, one forgets that nature is everywhere and finds ways to inhibit urban spaces. Perhaps if one stared long enough at the views out of the flats and into the sea, one would chance upon a dolphin. 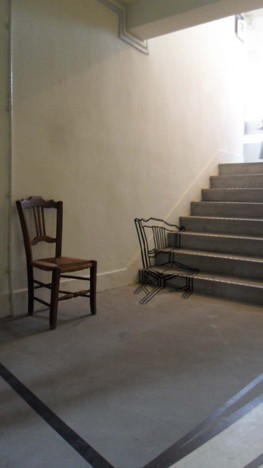 Teng Yen Ling’s playful “Secret Landing” creates a new domestic space in a hidden stairs landing. Banal objects like a bicycle, the lift or a chair is given new spatial meaning (not to mention photo opportunities), as the contrast of black tape against the concrete, white washed walls laid across different surfaces create a new perspective of the different planes.

The juxtaposition between the curated art and the art/possessions of the home owners create a dialogue for viewers. Open House 2011 features 12 “official” artists, including Messy Msxi, John Low amongst others, and yet as one walks through the homes of others, one cannot help but question, what is art and what is it’s value? 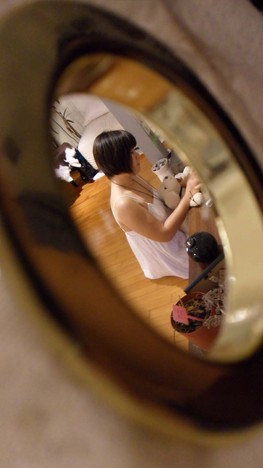 Just as one takes art at face value through the medium of paintings, Open House surprises you with installation art. Located at the last flat, Clare Marie Ryan and Marc Gabriel Loh’s installation further encourages voyeragism as one peers into a living room setting. Domestic acts of answering the phone, typing on the type writer creates an awaress of space and the passage of time. All that is lacking is the soundtrack of life.

While Open House 2009 created a domestic setting for the artworks along an intimate street based neighbourhood, Open House 2011 in the larger housing estate setting added the dimension of place and what it means to live in the Singaporean heartland. Diverse needs meet culture, meets expression, thereby creating a rich and diverse tapestry in one modernistic block of flats.

We cannot wait for the next open house, we mean open neighbourhood.