Interactive fusion of Art and Technology. 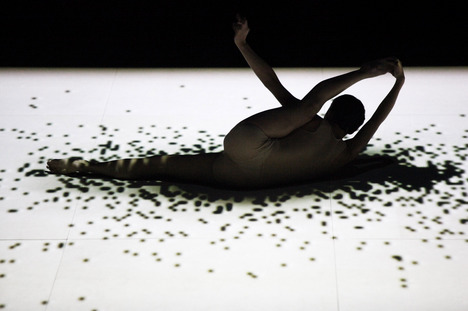 A new realm of performance by an Australian dance group Chunky Move, their recent award-winning dance performance Mortal Engine, directed by Gideon Obarzanek (who is also a choreographer), brought together different elements as dance, video projection, music, laser and real-time interaction between body movement and state-of-the-art computer system. This is an aesthetic and hybrid multimedia experience that explores the notions of relationship, tensions of connection, and also conflicts between the self and others.

The realization of Mortal Engine points to the interactive fusion of fine art and digital technology, producing a profound interactive experience. The various shadow projection with beautified graphics and patterns, which is the feedback response from the computer system where it receives input signals as data from the choreographers’ body movement. These become the focal points and audiences immerse in an ever-shifting and shimmering world during the whole performance.

Being the director and choreographer, Gideon Obarzanek, is also the artistic director of Chunky Move, specialized in interactive performance since 1995. It has created a number of works for the stage, site specific and new-media installation. Mortal Engine received Best Visual or Physical Theatre Production at the Live Performance Australia Helpmann Awards and an Honorable Mention in the Prix Ars Electronica Awards in the Hybrid Art Category. Ars Electronica is one of the most important yearly prizes and world recognizable event in the field of electronic and interactive art, a festival to present best works that are in the field of digital art and technology from artists and organizations.

Gideon Obarzanek collaborates with Frieder Weiss in Mortal Engine, an engineer in the arts who developed the real time interactive system (EyeCon and Kalypso) that captures the dancers’ movement via infrared video camera, a responsive environment is generated with light, video, animation and music. There is no pre-rendered video, therefore all the sound and visual are all generated in real time from movement data, with almost perfect motion sensing and technical implementation. Of course, the system worked perfectly well with the laser and video images, designed by Robin Fox and also the expressive sound, composed by Ben Frost, which adds further sensorial experience to the audiences. 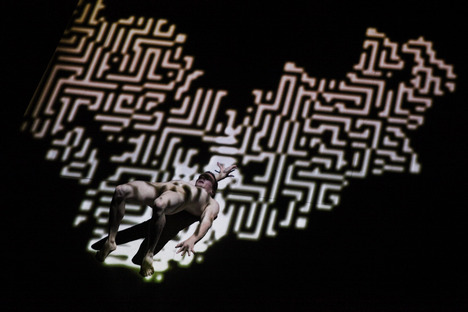 This type of multimedia performance is pushing our focus towards technology interaction, this acts shift our attention away from traditional parameters of narrative expression. Despite of the appreciation of the technological integration in performance art, how can we get a balance to incorporate new technology effectively in performance such that the messages or the contents retain as the focal point, instead of letting visual or interaction dominating the stage?

Using sophisticated technology in Mortal Engine intensifies this impression. Dancers are moving slowly and at the same time, music and sound are accompanied with the whole piece, serving a completed and smooth control in the feedback system. This constant triggering and mirroring effect created a unique viewing experience. Light and sound becomes the dominant part of the show. 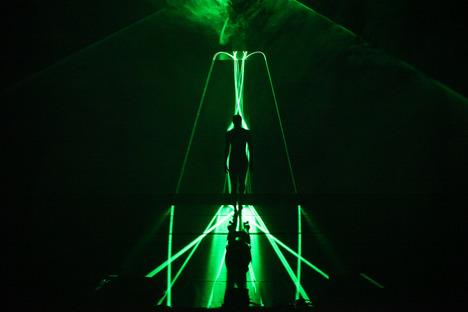 Generally speaking, dancers explored their body limit to produce mixed of various visual projection patterns and sound effects. This visual form could be generated by their body-made gesture. Those geometric pattern or silhouette followed the dancer’s movement, retained around their body, and sometimes oscillated between spreading out and pulling together. Almost most of my attention was focusing on the visual effects from the shadows, and the coherent relationship established among the six dancers. This override the physical appearance of the dancers, part of the reason was their body movement couldn’t be always seen clearly under the dark projections.

During the male-female couple bed scene, the dichotomy between intimated, connected and desolated, disassociated relationship has been expressed incredibly realistic. The couple was standing against a vertical wall as if lying in bed. This setting at the same time added a deeper reflection due to a clearer graphic presentation. It’s like a parallel reality show. The multimedia effected such as lightening-like lines, electrified power and earthquake sound evoked emotional sensation as the same time, visualized the looping cycle of a couple relationship. Conceptually, this scene was very attractive to demonstrate this notion, especially with different body movement and communication within the two dancers, such as holding hands, lying on each others’ shoulder, turning around to another side, keeping a distance between the couple etc. Those were the behaviors that can realistically connecting with the audiences and expressing in an innovative way together with the technological treatment. However, the projection and visual effects finally dominated the scene again. Audiences looked at the projected shadow and the generated graphic patterns that still retained on the “bed”. It was because cumulative delayed shadows formed another visual pattern. Audiences gradually attracted to the reaction of the sound and projection until the stage became completely dark. 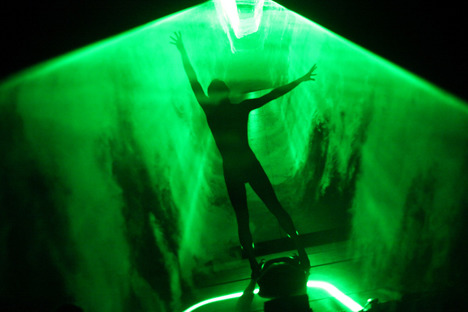 The performance ended with a laser light show for the last seven minutes, the stage and the entire theatre filled with smoke and followed by a bunch of green laser light to create a dreamlike effect. It filled with the qualities of surrealism, where it mixes with fact and illusoriness. This produced a solid but a dynamic wall as a prop. The dancer pushed the virtual wall and the light responded to her hand’s movement. This reactive boundary created a new form of aesthetic experience. The light beam served the purpose of both cinematic spectacle and theatrical property.

Conventionally performers used their body or verbal language to express the narrative, but now with the use of cutting-edge technology, it helped to visualize and formulate another new perspective in understanding the work of art. I was totally immersed in this fantasy, attracted by those interactive imageries. However I had carried a traditional way of watching a performance, probably was a narrative with a smooth transition that lead you step by step to go deeply and guide my ways of seeing.

There were a lot of elements to be focused such as the wonderful body movement from the choreographers, the electronic sound, the projection and laser light, the shadow movement and the interaction. I found the interactive visual effects caught too much of my attention during the whole show. I had an expectation that a performance shouldn’t be technology or new media driven, as those are just tools to facilitate the happenings or help to visualize and support the whole scene. I had to admit that the technology was marvelous as well as the interaction part between the choreographers and the shadows, perfectly matched up and feedback respond with no seeable errors.

Nevertheless it had given me the impression that the director would like to use this as a dominant way of communication. While this balance point is always debatable, technology does bring in new perspective of art appreciation and new sensorial experience to the audiences.

Mortal Engine a new realm of performing art with the fusion of art and technology. It expands the way of seeing, and explores the new possibility of combining the mix of elements into a performance stage to achieve another form of aesthetic state.