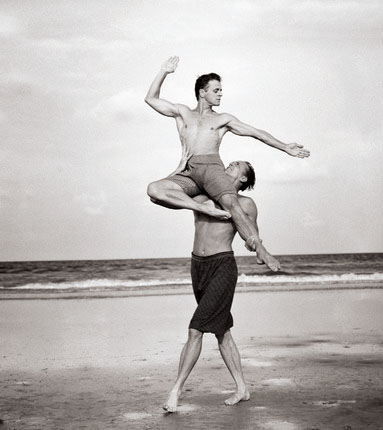 Annie Leibovitz is as famous as the subjects she captures, iconic and memorable worldwide due to an honest and wisely creative approach to each photograph she takes.

Annie Leibovitz: A Photographers Life 1995-2005, is a spectacular exhibition containing 150 photographs that have previously graced London’s National Portrait Gallery and Paris’ Maison Européenne de la Photographie, which I was also lucky enough to see in 2008. Now it’s delightfully possible to see the exhibition in Australia, brought to Sydney’s MCA as part of the Sydney International Art Series.

Since the early 70’s, Annie Leibovitz has been photographing with a passion like no other. Beginning alongside the early years of Rolling Stones Magazine through to Vanity Fair and Vogue US, during this time working closely with Hunter S Thompson, Bea Feitler and Susan Sontag,

The exhibition exhibits her iconic and personal work without caution or bounds. An extremely diverse body of work; spectacular movement captured from dancers Mikhail Baryshnikov and Rob Besserer, to the iconic portraits of Demi Moore or Yoko Ono and John Lennon.

The personal set of photographs encapsulate a pleasant melancholy. Photographing the glamourous celebrity lifestyle through to intimate family moments and the fatal illness of partner Susan Sontag. The lens and photographer have an ability to capture a subject so simply and fluently; something Annie does perfectly.

For creators, innovators, appreciators and photographers alike, inspiration is aplenty. One definitely not to miss.