It is seven o´clock in the evening. I´m waiting with the label manager outside the corridor in the backstage. It is quiet. Blonde Redhead is waiting for me. – “Oh, please you can come in”. We are in the dressing room. We introduce each other, Amadeo Peace and Kazu Makino. They are relaxed, laid back, feeling good. It has been half a month straight on the road already, this is the last part of the European dates. They present the new album “Penny Sparkle”, a delicate journey, perhaps even more melancholic and richer in synths and electronic vibes than previous releases. The band has been out there since the early 90s. How do you feel about it nowadays?

We don´t think about that. We don´t have the feeling that we´re been doing this for that long. The debut album with Steve Shelley, how did it happen?

He was starting his own label with bands like Sebadoh, Cat Power… We did a first single with him.

Do you think `23´ meant a breakthrough in your career?

We think it is another record we did. Since we are in 4AD things are more clear and fresh. There is more people involved so the record was taken more seriously. Done with more care. We spend more time to work on it. All became more complete. Before that point all was crazy, always with tight budgets and sort deadlines. I don’t mean Touch and Go did not properly but it was ok. In fact, they currently have a large catalogue.

This is because the first time I (Kazu) came to New York I was living in the number 23. Then I moved to my new place and it was on 23rd street. That number was following me, I was going to the movies and then it was 23 seat—haha, I felt like something was going on…

Hehe, yeah there were obvious signals. It is a good number. So I do understand it is a positive experience with Beggars so far.

Yeah, all is more structured, you know. “Penny Sparkle” has perhaps even more electronic vibe in beats and synths that previously albums.

Yeah that can be right to say.

Do you feel yourself some kind of evolution or new motivations in this record?

We are inducting in different ways, I suppose. You can´t get away what you are so you just let it go. It is fresh to feel you don’t know what you are doing.

So has anything changed in the live set up about how do you currently perform?

We are still learning a lot. Yes, now it is a bit different than before, still needs to develop itself. Sometimes we have some collaborations on stage in a couple of songs, but the act it is just 3 of us.

Please tell me something about the experience to work with Alan Moulder.

He is pretty amazing! So much more what I expected. We were there with our songs and he was able to change and improve them just modifying a certain part. He is meticulous, he wants to know about the song, what is it about, why you do this and that, some kind of emotional. He has done so much work, impresive… so for him it is important deepen on it. He does a lot of input. 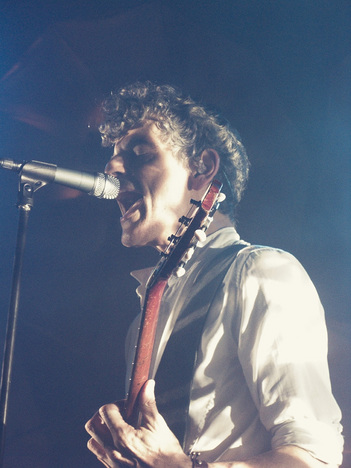 I heard the Swedish producers Van Rivers and the Subliminal Kid are involved in the production of this new record. How is that?

It came by accident. By chance Fever Ray were playing in New York. We met them, we talked and eventually we were for a cup a coffee. Talking about “Here Sometimes” we thought could get involved together. With Alan we worked all over the album, Alan mixed up. Please explain me the way you work together and how you have recorded this last album.

We usually starting recording small ideas. Amadeo does compositions so he records ideas or together with Simone coming up with rythms and good harmony. Kazu then works more on melodies.

Both Amadeo and Kazu. She writes the songs she sings.

In this album one song is called Oslo and another is Spain, what is it about?

We did a temporary title that stayed with us. Just to organize the songs so we came up with a title.

Your schedule is plenty until 2011. You´re doing Europe now and soon to U.S. Tell me about it.

It is tiring. We sleep in the bus. America will be easier than Europe. Big roads and all is more straight. We do it with the tour bus. We will be not home until December.

Amadeo born and raised in Italy correct? When did you move to U.S?

Kazu she is originally from Japan, what is your hometown?

Sure! we will be there late January. We will do a few cities. Then more tour during the next year also in Australia.