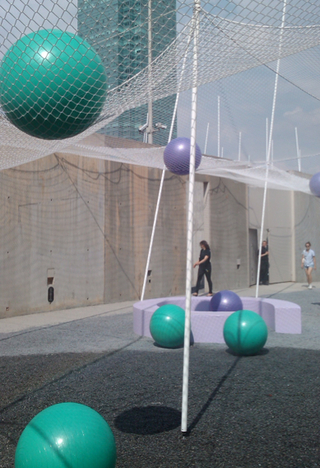 As described in designer’s concept statement, Pole Dance, a “participatory environment that reframes the conceptual relationship between humankind and structure”. It is a highly interactive installation which touches upon the element of ‘elasticity’ and ‘play’, in which the name is inspired by the forever changing ability of the structure’s shape and form according to playful human action and spontaneous environmental factors, such as rain and wind. The installation challenges the uncertainty of designed spatial outcome through interactions of users and of nature.

The project is arrangeded by flashy colored giant bounce balls lying freely on top of open net which supported by 30 foot high bending poles (in 16X 16 foot grid). Overall composition attempts to temporarily break away the institutional feeling of the museum, recreating the atrium as a playground, encouraging users to playfully interact with the design elements, ie. bouncing the balls on net, shaking the poles to reshape the net.Ultimately, low budget Pole Dance re-establishes PS.1 as not only an art institution, but also a summer recreational ground for NYC. Along with its Warm Up music session starting on 7/3, Pole Dance is set to “free from the fascination of the finite, and confronted with new ecologies, economies, energies, flows, and fantasies, we (the users) can begin to comprehend, and depict, a new image of life on earth, that of a seemingly elastic cloud. Everything has become untethered. We bounce about, footloose, on a network of intersections and knots” (exerpt, Concept Statement, SO-IL).