The Swedish pop is very appreciated everywhere. There is a few artists that have written their name with big golden letters for the last decades in history of contemporary music. Now someone is carrying on the torch. Although it is almost 10 years since the beginning of Shout Out Louds, now with their new release “Work” they have established one of the most important albums of the recent history of pop in Sweden. In fact, they are one of a few European bands with a real audience in the U.S and the band´s popularity is spreading beyond. 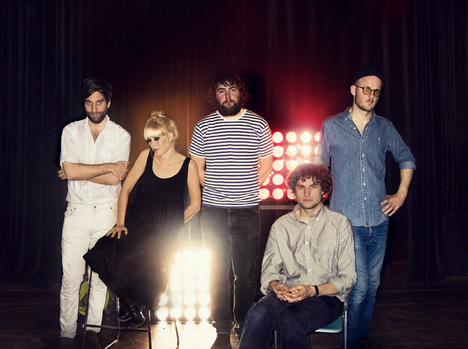 “Work” is their 4th LP. With “Our Ill Wills”(2007) they got lots of fans in both Sweden and abroad. Now everyone agrees that “Work” is an artistic maturity of the band with serious pop songs. The record has been recorded in Seattle with producer Phil Ek, who has produced other recent great albums like Band of Horses or Fleet Foxes.

We got a hold of them in the middle of their tour in Canada and the U.S. This summer they will tour Europe and by the end of the year they might reach Australia and further.

Some musicians used to refer “go to work” when it is time to record or play. In the other hand, many others refuse to do that.

How do you “work” together? Who does what?

I usually come up with an idea or sometimes a finished songs but we all arrange and add things together. Sometimes we don´t have to talk about it and sometimes we can tear it down to pieces and fight for hours.

How come you recorded in Seattle?

Phil Ek (producer) lives and work in Seattle and we told him to find a good studio and work with people he like.
We wanted to get out of Stockholm and be just the band. Get away from distractions and such. The area around Seattle looks a little bit like Sweden but with topless coffee drive-throughs.

How is “Work” different from the records you have done?

Just being away from home was a big difference. Everyone was stuck in this house and the way Phil record, a more traditional way with everyone in the same room really finding the right take. He was super picky so we learned a lot from that. Now we´re music prodigies.

I heard you all in the band known each other since your childhood. How was it to grow up together how that has influenced in the band musicwise?

It´s easier to be on the road with friends. But harder to work sometimes. You are a little bit more careful what to say to each other cause we want to stay friends when we´re back home. But I wouldn´t have it any other way.

Tell me more of the history of Shout Out Louds? How and why did you form a band together?

Ted and I was borrowing each others records and started talking about music and bands and he had never been in a band before and wanted one.
I got a little bit tired of playing in a band but he convinced me and we called Carl the next day and started playing as a trio with a drum machine. Bebban and Eric joined a few months later and here we are.

After “Our Ill Wills” you all spread across the world doing different things? And how come the decision to re-group? Why now and like this?

We just needed a break from everything. From touring and perhaps from each other but we knew we were going to go back and record.
The break was really good for us. Everyone has got the strength back.

Now in May you are touring the U.S. Seems you always have a good crowd there. Do you think people in the U.S pay special attention if you´re coming from Europe or moreover, if you are coming from Sweden?

Maybe, I´m not sure. Sweden is known for great music and that helps of course.

What do you like most about to play in U.S?

At the moment, everything.

How is the tour going so far?

Brilliant. I think it´s our best yet. We´re in Toronto now. There is always a good party somewhere in this town.

After U.S and Europe, is it any plan for a tour in Asia?

We might play in Australia around new years and hopefully we can pop by Japan.
We had such a great time there last time. Bring us back for fuck sake!

Do you plan to get a new labels or digital distribution is enough for you?

We are working on it as we speak, to get a distributor in place also for physical release.

One thing that is peculiar about SOL is your excellent taste and choice of art works and graphic design, Who is currently in charge for this?

It´s me and Carl. We´re both design students so we love that we still do some artwork. Every records is inspired by something. This one is inspired by Irving Penn, the great photographer who past away last year. It´s important for us that we´re involved with everything. We´re not really control freaks but it feels better when you have the final result in your hand. Makes you proud.