Transmediale is a media art festival consisting of exhibition, symposium, film screenings and workshops. The parallel event, club transmediale focuses on music and performance. Here we will focus on the exhibition for this year’s Transmediale.

It usually gets warmer in Berlin around this season, but it was hit by snow this year. This year’s transmediale, entitled as FUTURITY NOW!, explored to recapture the 20th century. 2010 is the year which has been synonymous with past images of the future. But as the year approaches, it is described as the society neither the utopia nor the dystopia. 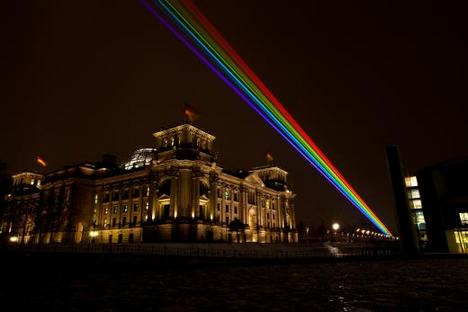 ‘From One to Many’, Yvette Mattern (Photo: Daniel Brune / Laserfabrik Showlaser GmbH)

Actually we still could not see “imaginary futuristic scene” such as wheelless cars running freely in the Metropolis. But it is clear, as you can read on the concept; “it is an increasingly complex web of economic, political, and cultural systems dependent on the convergence of rapidly evolving technologies that compress what used to be thought as ‘future’ into a more coherent and malleable ‘present’. As the future catches up to us, as a concept of technological evolution and progress, it seems to be experiencing an identity crisis.” We could catch a glimpse of these attempts through this fstival.

The festival’s exhibition is entitled as Future Obscura. The word Obscura came from camera obscura, which means “dark room” in Latin and led to today’s photography. This is an optical device that projects an image of its outside surroundings in the darkened chamber, and it is used for drawings by Leonard da Vinci in the 15th century. To connect this device with today’s technique and context is the concept of this exhibition. 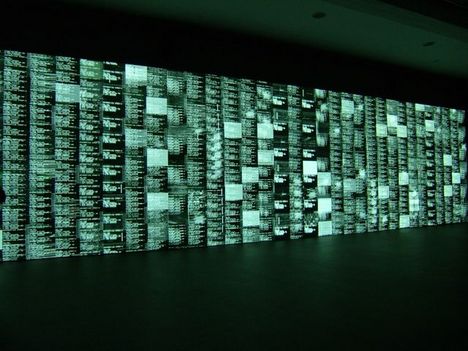 Ryoji Ikeda was presenting “data.tron [3 SXGA+ version]“. Massive numerical value were projected on a screen continuously like a sandstorm and suddenly shut down with inorganic beep sounds. This enormous stream of date suggests the image of possible future which links with a keyword such as “computer age”. 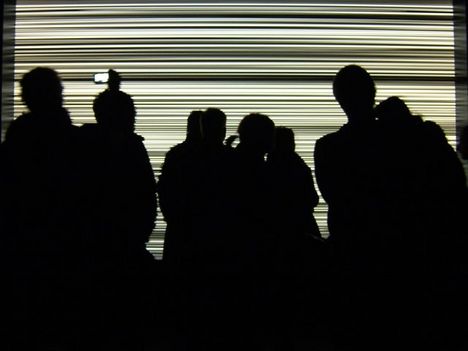 Žilvinas Kempinas, on the other hands, created the similar image with analog method. As I entered the installation hall, I confronted by what appears to be a large projection screen of numerous white pixel lines associated with fluttering noise. As I moved forward, they become aware that the screen is actually hundreds of strands of videotape stretched horizontally. They were vibrated, overlapped, and separated by wind and created flickering white lines and noise. He extend the usage of videotape as a moving image material and created new image. 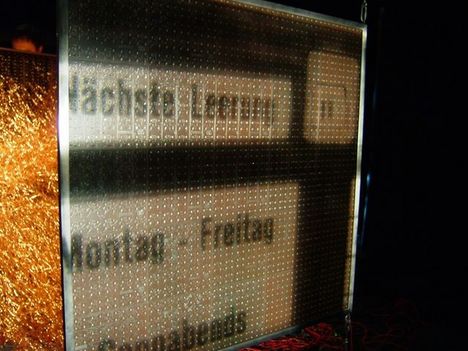 Gebhard Sengmuller presented a work which has a same principle of camera obscula using light sensors, electric wires and miniature bulbs etc. When I block off the light on the exposed part, the parallel shape along the shadow is elaborated on the display which is consisted by a hundred of miniature bulbs. This work presented something like retrospective atmosphere. 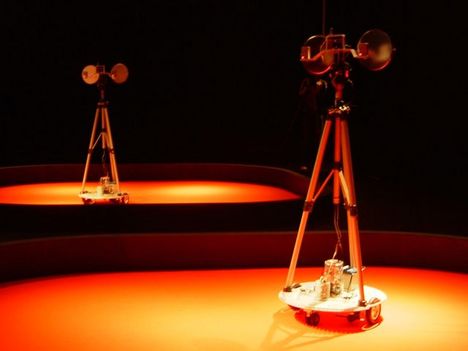 “Paparazzi Bots” by Ken Rinaldo are robots comprised of camera with altered face detection technology. They stalked around automatically and took pictures of exhibition visitor’s portraits. Comical movements of these robots recalled me some oldie robots in SF animation. 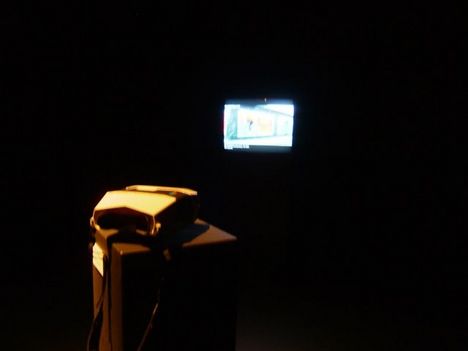 Julian Oliver, Diego Diaz, Clara Boi, and Damian Stewart presented a novel device called "Artvertiser“. You could see humorous public artworks on billboards and store signboards when viewed through the Artvertiser binoculars. The demonstrational video and actual guided tour with this device were presented at the exhibition.

I was personally disappointed about the lack of work with political contexts as it used to be seen before. (althugh they are taken up as a theme for workshops and symposiums.) Each winners of transmediale Award presented work with advanced internet technology. For example, Michelle Teran’s “Buscando al Sr. Goodbar” interplayed between Google Earth and Youtube. Aron Koblin and Daniel Massey’s “Bicycle Built For Two Thousand” comprised over 2,000 voices recordings collected via internet web service and distributed automatically based on the scales and the tones. However, I felt like something is missing; such as a relationship to reality and an amazement of the looks and contexts.

Even though they are not awarded, there are some impressive exhibitions and performances outside the exhibition booth. I would like to introduce some of them from Club Transmediale and Transmediale for the conclusion of this article. 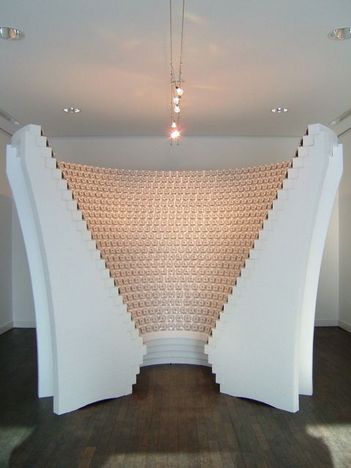 Coincidence Engines – [The User]
Artist duo [The User] (Thomas McIntosh and Emmanuel Madan) exhibited “coincidence engine” in homage to the Hangarian composer György Ligeti’s “Poème Symphonique for 100 metronomes”. The installation is constructed with two rooms. There are a thousand of analog clocks lining up on the stadium-shaped pedestal made by styrene foams in the first room. As I moved inward, I could start to hear a clicking of each clocks. Each of them has a gap to click and it created unexpectable rhythms. When I was surrounded by clocks standing at the center of the installation, it seemed like everybody was devoted in same thing intently. 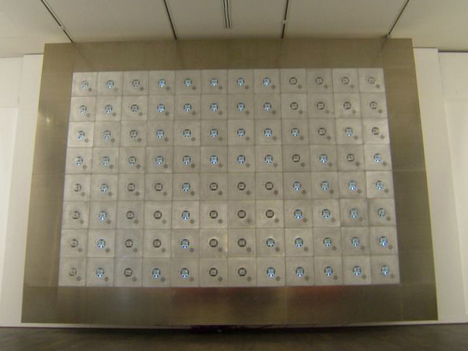 In the second room, a number of units with analog clock was lined up as 12×8 grid .Clicking sound of a clock in each units created a tapping sound through a bullhorn and LED light went on and off along with the sound. The clicking sounds made a rhythm of syncopation, or sometimes harmonized . As it composed a music coincidentally, I devoted myself to enjoy the rhythm and light. 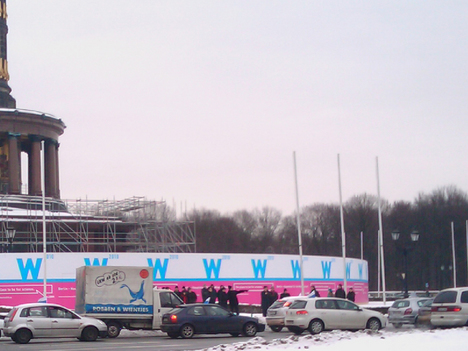 ARCHITONE – YOKOMONO PRO
Although it was a cold day, many people were waiting for a performance at the Siegessäule Berlin. About 5 minutes after the opening time, several cars with red and white flags entered the rotary from the north sounding their horns jaunty as if they were celebrated the victory of Polish soccer team, and they swept away to the east. After a while, some cars with blue and white flags run through sounding their horns, then other cars with green and white flags run through as same. Then I realized that they were not enthusiastic soccer fans; this was a performance! As some cars with red/blue/green flags passed by intermittently, I noticed their horns were played automatically without any gaps and the drivers did not touch the Klaxons. I guessed their horns were played by remote control. The sounds of horns from right, left, far and close composed minimal music. In the meantime, some car run by with the horn, a fire engine run though, and a wedding car drove by with a loud screech of horn. These unscheduled happenings were also connoted into this composition.