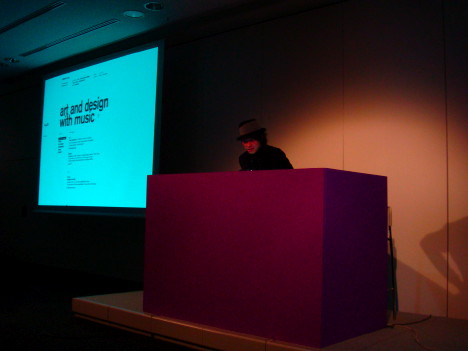 Shun Kawakami gave the first presentation of the last half of Tokyo Visualist Symposium.
Started his activity as “artless” in 2000, kawakami has been working on various projects including his own creations; holding exhibitions and clients works. Besides his presentation about mainly his artworks and exhibitions, he presented about a recent exhibition collaborated with Takashi Kawada which was held in this fall at JAGDA TOKYO.
I liked the part when he said that artworks are created by meeting with people and we consequently meet those people who we should meet. He also presented us his working process on the graphic collage works and its concept, which would be a remarkable story for all designers. 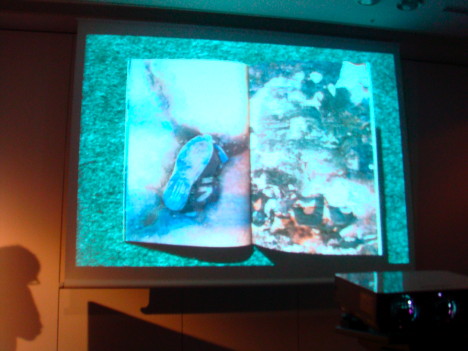 The next presentation was by Taisuke Koyama, who is one of the most talented emerging young photographer in Japan. He bought a digital single-lens camera and that became his reason for starting his career as a photographer. In spite of studying photography at school, he studied on his own and continued his photographical creation to date. Showing us his various photos, he revealed the process of his photo shooting including maps where he went to take photos, details how he shoots at where. He also talked about some of rules for his work that he always go shooting around noon in sunny days and he never crop them. Expect to see his upcoming creation. 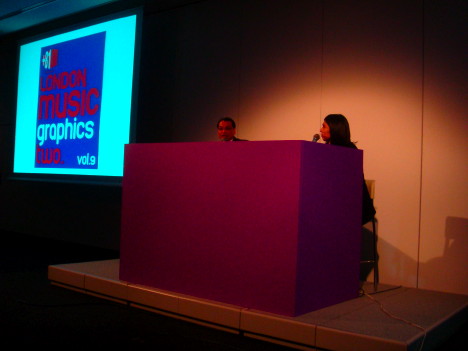 The Tokyo Visualist Symposium finished up with a presentation by Hideki Inaba, who came along with Satoru Yamashita, a creative director for +81. Inaba is one of the most remarkable designers, who has received high acclaim in Japan and abroad for his past works such as his design for +81 since the late 90’s and SAL magazine, and that he has been selected for the cover design for the popular book “Graphic Design Now” by TASCHEN.
He talked about how he started his career as a designer. He mentioned that there wouldn’t be his design without computers. It was interesting to know his concern for “micro” explored from the past to present works. He also revealed that he is interested in graphic, but he feels design is as important as graphics. Recently his activity includes one of the judging members for TDC and preparing for his exhibition in the next year.