We will be watching, with interest.

Illustrative 2009 is the fifth installment of a festival that began four years ago. Over it’s lifespan the event has grown from a modest group show in Berlin to a roving festival featuring the work of illustrators from around the world, and now includes a conference program, a portfolio fair event, a showcase of work from Europe’s best illustration and graphic arts schools, and a Young Illustrator Award.

A huge crowd of people surged into the exhibition space on the opening night, swapping the unseasonable cold outside for the warmth and visual feast in the Villa Elisabeth in downtown Berlin. But as we roamed from room to room, among the thickets and groves of creative work, we noticed that the exhibition – the centrepiece of this festival, featuring the work of over 60 artists – was not a collection of illustrations. 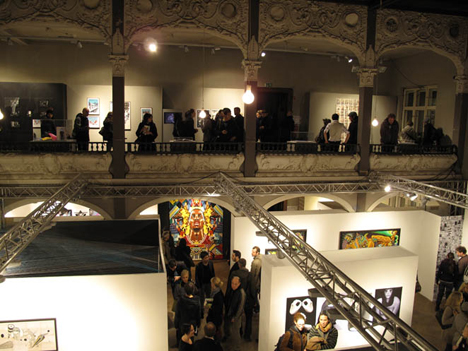 Illustrations are, of course, the end product of a very particular kind of process. They are intended to demonstrate, illuminate, clarify, display and provide examples. They are, by definition, linked to a text. But there was no text to these pieces. These seemed more like works of art than illustrations. This impression was confirmed by the curator of the exhibition, Pascal Johannsen, who described the collection as ‘art made by illustrators’. 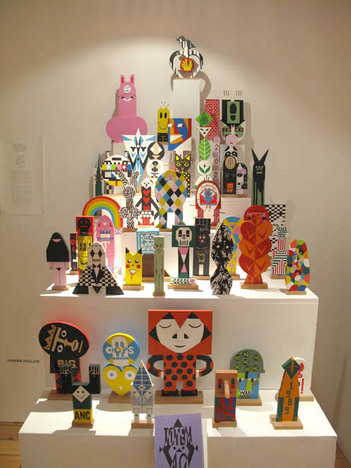 Which got me to thinking: why illustrators? Why not the art of artists? Or of architects, ship-builders or cabinet-makers? But there is something compelling about the art of illustrators, in particular. Of course, illustration is about good communication, clever ideas, and even beauty, but I can’t help but think of illustration as being, in addition, a unique experiment in aesthetics. Illustration allows us to witness the emergence and progression of aesthetic ideas, precisely because the attention of the illustrator is upon another subject entirely. 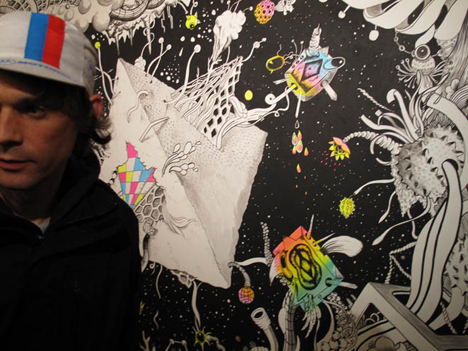 And while conceptual artists invite us into their own worlds, leaving clues to guide us to a particular perspective, illustrators are more often asked to communicate with us within our own range. They are highly articulate in a visual language that we recognise as our own, and their creations are, as a result, immediate and accessible. 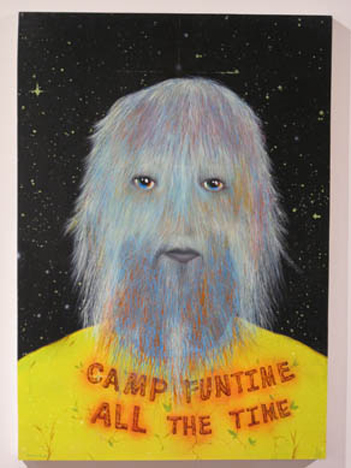 Eric Sandberg’s work is a case in point: his images of children gaze at us placidly though bloodshot eyes and fine downy hair that covers their entire faces. The painterly ambiguity of the work houses something more direct and urgent as we instantly relate to their vulnerability, are repelled by their grotesquery, and wonder what level of responsibility we bear, as a society, for their deformities. 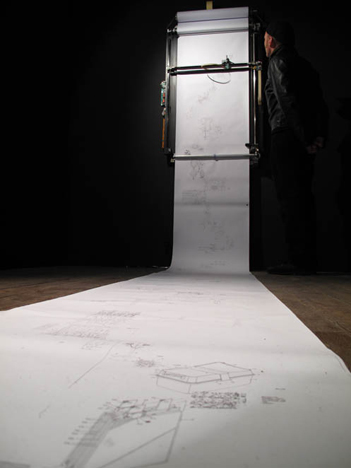 Many of the artists seemed to be inspired by the freedom from text. Their works made space for themselves and were comfortable to stand alone. A number of them considered the act of illustration itself, turning their craft back upon itself. A plotting machine dominated one of the rooms, its mechanical arm drawing technical plans and organic processes with precision and fluid grace. The perfect drawings snaked out over the ground, under the shifting feet of disconcerted illustrators. 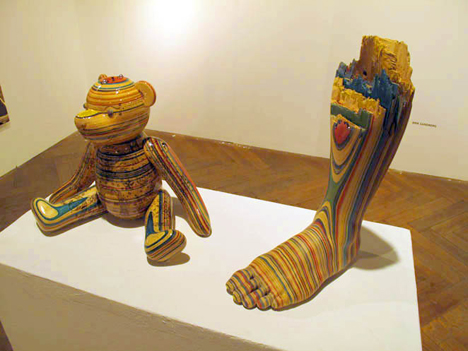 Some artists took advantage of the space – stretching out beyond the cramped confines of editorial work and into three dimensions, grand scale and new materials. 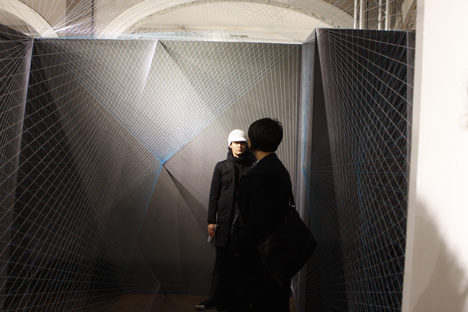 Sébastien Preschoux’s line drawings, on the outer walls of a small room, appeared coldly computed, like the tracings of a spirograph. Entering the room felt like entering one of these drawings – geometric and cold. It was only upon closer inspection that I realised that the drawings were made in ink and the installation was constructed with string. I imagine the tension in that faultless string sculpture is the product of human mess, frustration, despair and triumph, which has been stripped away for exhibition. 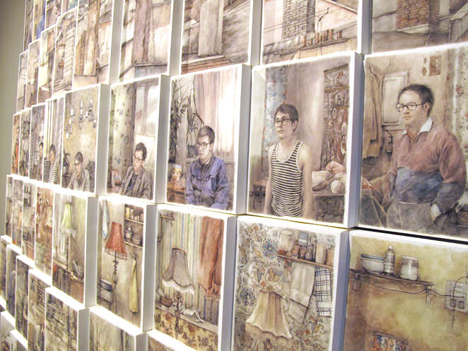 Sonja Danowski offered an array of small panels – a row of nine paintings of people in raincoats above a row of nine chimney stacks, a row of nine bespectacled boys, a row of nine bell lampshades and so on through a range of common urban objects and characters. The reiterated images, all drawn from the same colour palette, point to a close consistency between the many lives depicted. And Danowski’s illustration technique, closely observed and finely detailed, reflects the intimacy of the subject matter.

Some works seemed to suffer from the lack of an external text – without a brief to give them structure, they seemed to slacken and crumple – highlighting the nature of the opportunity and challenge that this exhibition offers to illustrators. 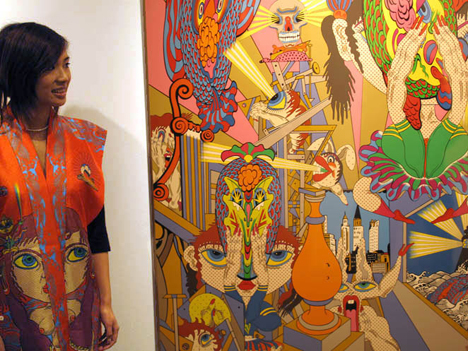 It is a festival of almost dizzying breadth, including work from pioneers of the space between art and graphic design – such as Keiichi Tanaami – alongside emerging artists such as Julia Bruderer, who took out first prize in the festival’s Young Illustrator Award, sponsored by Swatch.

There are sculptural works, animations, drawings, paintings and installations covering hundreds of subjects, styles, techniques and media. The conference topics ranged from the strategic to the practical and through to the personal.

When asked about the future of the festival, Pascal Johannsen revealed his hope for even greater breadth, drawing on illustrative practices from Africa to Eastern Europe. He is intent on exploring ‘the grey zone between design, applied art and fine art’, and finding therein ‘the new generation of contemporary art’.

We will be watching, with interest.