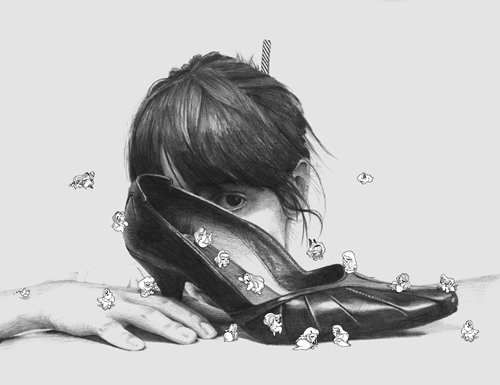 Maria Vittoria Benatti aka hi! works as a freelance visual designer based in Modena, Italy, one hour half away from Milan by train. Her works are characterized by cute and lovely figures which she calls them as Pupette. Started off by participating in the Domestic’s wall sticker project, her Pupette will spread across the world and might soon come by to your town!

Hi! I am Maria Vittoria Benatti. I was born in 1977 and live in Modena, Italy. I have just obtained a degree in sculpture at Accademia di Belle Arti di Bologna, three months ago (February 2009). It was a long long degree course for me, 6 years. In the meantime I have worked as a freelance visual designer collaborating with some agencies of the area of Modena.

What’s your recent and ongoing projects?

I am often involved in design work for an advertising agency. I am currently working on a beautiful illustration project for an exhibition space in France. Unfortunately I am not allowed to sign this work, neither to show it or give more information about it. I like working as a freelance, it is the best way to experience new signs and styles, the drawback come out when you can’t show your work, because of your name can’t appear! 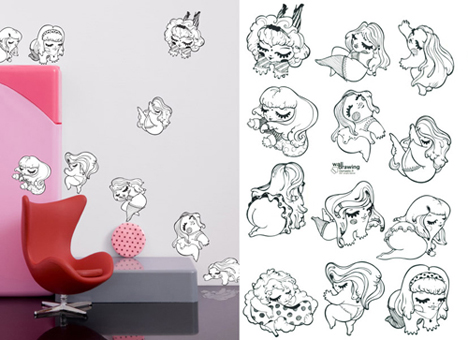 Please introduce your work for Wall Drawings by Domestic. How did you get involved in the project?

The collaboration with Domestic was my first and lucky chance, and for me is a real honor to be part of a collection of great artists and illustrators : Matali Crasset, Antoine& Manuel, Laurent Fétis, Geneviève Gauckler, Jeremyville, Tado, Fafi, Jon Burgerman, etc.

I was involved in the project, sending to Domestic a lot of drawings. I have misunderstood their “Domestic contest” : instead of sending them one of their stickers applied on my home, I sent them millions of my sketches, I thought it was a new proposal contest! At the end they decided to produce one of my drawings, 12 figures in black and white, that I called Pupette. The guys from Domestic, Massimiliano, who is Italian like me, and Stéphane are very nice people, I met them three times and had a lot of fun.

In 2008 I designed a second project “Dream size 37”, pink and red Pupette adoring a stiletto shoes. 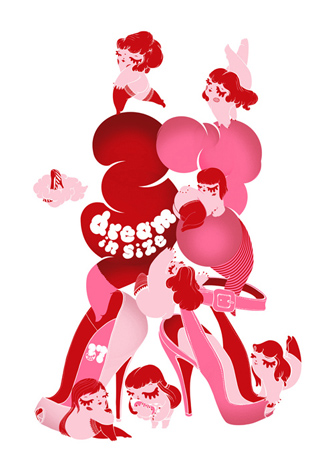 How about your works featured on the Australian Curvy 5 book and Grafuck 3?

I sent them drawings of my Pupette through mail, for both publication choose the drawing, that Curvy also used as advetising image.