The introduction started with, “One billion people in the world go hungry every day. But is genetically modified (GM) food the answer?” 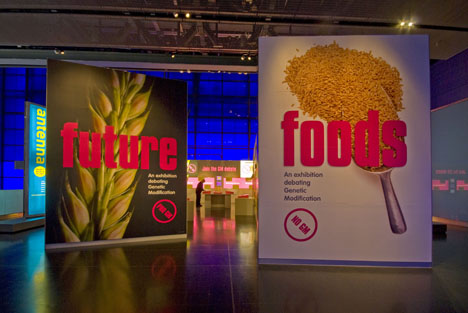 Science Museum London proudly presents an Antenna special exhibition debating genetic modification (GM), which has resulted interesting findings on both opposition sides after three months investigation. One of the most frequently asked questions in the display is whether GM food is a potential solution to the famine especially in the developing world, and here we have two members of the investigation: Rob, who votes support for GM and Raphael, who is strongly against the idea.

It is time calling for radical change in farming around the world.

Rob: [based on GM soya in burgers or bagels in US] Since millions of people have been eating GM crops for over 10 years, can’t we accept they are safe?

Raphael: Shouldn’t we try to find farming solutions that are more in tune with nature?

Rob: GM technologies can give plants useful properties they couldn’t get in the wild. Why should we limit ourselves to traditional breeding methods?

Raphael: The developing world can’t wait for GM technologies. Shouldn’t we encourage farmers to use the best alternatives methods instead?

Three hundred millions people in Africa rely on maize for their main source of food. Scientists are now working to cross breed ordinary maize when a variety that contains substances, which can be easily converted into missing vitamins.

Rob: If GM technologies could prevent widespread malnutrition, shouldn’t we get on and use it?

A hundred million people in Africa eat cereal sorghum every day. It’s not just their choice for breakfast but the basis of their entire diet. The problem is it is not nutritious enough for healthy grow.

Raphael: Shouldn’t we use tried out tested natural methods to improve crops, rather than toying with GM technologies?

For years, farmers have known that sowing clover underneath crops increases nitrogen levels in the soil.

Rob: This GM rice would save farmer’s a fortune is fertilizers.

A four-leafed clover is supposed to bring you luck but scientists want to use glover’s genes to improve farmers’ fortunes and reduce fertilizer use.

Raphael: Why wait for GM technologies when we are not sure if they’ll increase crop yields? We already have simple solutions that work.

Pests and diseases are a farmer’s nightmare but what’s the best way to keep them at bay?

Scientists at Peru use chickens with local potato fields to eat up the Andrean potato weeds – a notoriously damaging pest.

Rob: [using plants that resists problems by themselves] It sounds sensible to use GM technologies to minimize nasty chemicals.

Raphael: It sounds sensible to me to minimize nasty chemicals in the environment, natural control methods.

Growing crops are thirsty work. As our climate changes, we need plants that grow well even water is scarce.

Rob: we can GM technologies to adapt our key food crops to survive climate change.

Raphael: They are already plenty of crop varieties that can cope with drought conditions and climate change. There’s no need to transfer genes unnaturally using GM technologies.

It is your turn to join the GM debate: what’d you say?