Even foul language could be as pretty as a flower.

The Hong Kong artist Tsang Kin-Wah is good at playing around with text and patterns. His curiosity leads him to challenge the social norms by creating stunning text and pattern wall installations. His works are not only full of rhythm; they also contain rich context of cultural background. His sensitivity of the surroundings translates to his creativity. Tsang’s installations have been shown in different cities with his reputation growing. Keep up the good work! 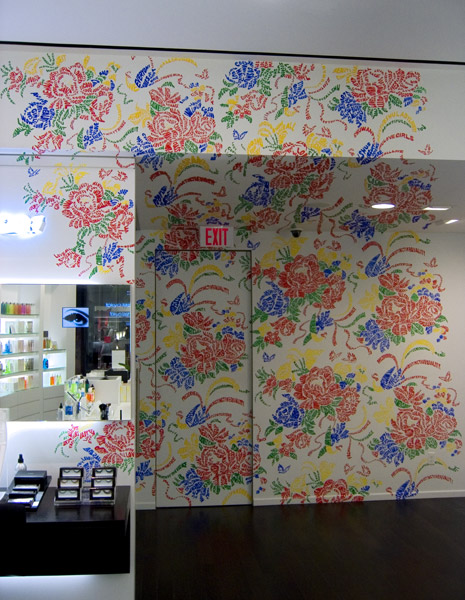 First of all, could you introduce yourself and share your background with us?

I was born in China in 1976 and moved to Hong Kong with my family when I was five or six. I grew up and had my undergraduate study in fine arts in Hong Kong. That was the first time I learnt arts in a formal way even though I liked arts, painting, drawing and calligraphy when I was a kid. It was also the time that I started to make art and had exhibitions. Two years after graduating from university in 2000, I decided to go to London to have my postgraduate study, because I wanted to broaden my view and deepen my knowledge. I studied there for a year and started to shift my focus to create installations and I have made my first pattern installation. Later I went back to Hong Kong and continued to make art till now. 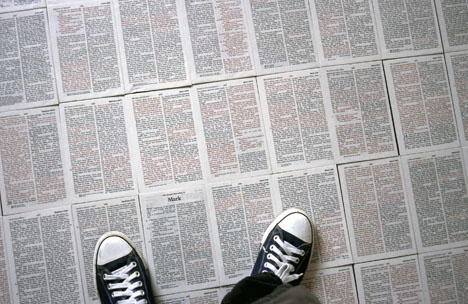 Your text and pattern installations have become your signature work, how did you come up with the idea of creating it in the first place?

I first started to make “text-pattern” art around 2002-2003 when I was studying in London. I used quite a lot of texts in my work before, but still hadn’t involved any combination of text and image. I wanted to have some progresses on my work and to make something different, so I went to London to have my postgraduate study. I did some different experiments such as my “Untitled – Bible” and “Sightseeing – London’s River Thames” when I was there early in the first year.

However, I was having a really bad time in London, as that was my first time to live overseas. It was quite hard for me to follow the British living and working styles in the beginning. The worst thing was that I was verbally attacked and insulted by two black kids later, not because of anything but just because I am Chinese. I was really frustrated and upset by the whole situation, people and environment.

This emotional impact inspired me to as I always look at or observe different people and environments. I also knew that I needed to find a way to release or express my unhappiness and frustration. At the same time I realized my constant interest in text and growing interest in dealing with space, so I started to carry out my experiments on text-pattern works at the end of my study in 2003.

You have been using quite a lot of foul language as your design element, could you tell us why and what is the message behind this?

I think the main purpose of using foul language is to find ways in challenging social norms and to see how we see, perceive and miss the things that surround us, how we are cheated by the appearance or surface of an object. The reason why some people would be shocked is when they realize the presence of foul language; things that are unexpected, negative or vulgar. In fact, it exists in our daily life all the time, we just ignore it. Different people would have different feelings on the texts when they read them. Some would take them seriously while some would treat it as a joke. This, in a certain way, reflects their views and attitudes on the issue and content. This is also the reason why I prefer to have the texts written down and become a visual, but silent presentation of the content. 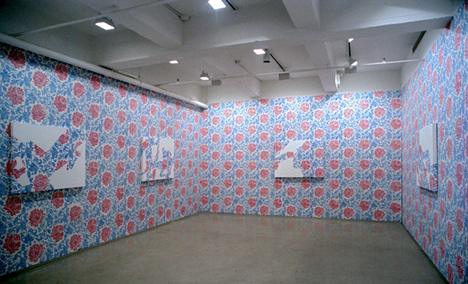 Apart from showing your text installation in the exhibitions, you also include sound in your show, how do you combine both elements together?

I started to use sound as one of the main elements of my installation work from my solo exhibition in Paris early this year. After that, I found myself more and more interest in using sound or music, which could create a certain kind of atmosphere and add another layer to the work. That is why I keep using sound and music in my works showing in Manchester and Helsinki. In fact, I like music a lot.

When I am working with text and sound, I usually have a rough image or idea of how the work will look like and what kind of atmosphere I want it to have before. Like the work at Kiasma (Helsinki), I preferred to have a dense and dark atmosphere. I used black vinyl for the text and audio from the film “The Birds” as a base and mixed other sounds to create scenery of birds or the creatures that fly from the basement to the sky.

Could you please tell us about the creative process of your pattern installation? How long does it usually take to finish an installation in the exhibition venue?

Usually I would first find an existing pattern or image, which has historical and cultural background or other stories that relate to my ideas and the whole concept for the show or venue. Then, I would start to think about the text and the content and arrange this around the image. This part of the production is mainly carried out in a digital form on a computer and sometimes would take over a month to complete.

I would then use the final image to create silkscreens, and then hand print the images on different materials likes paper, textiles, etc. which later would be used for the installation. This part of production may last about 3 – 4 weeks. It also takes me several days or more to set up depending on the size of the venue.

It is a group exhibition organized by Kiasma. I was in Helsinki last summer for a site visit before the exhibition. In fact, I have never been there before and I was quite impressed by the environment and atmosphere among the people. There was some sort of depressing atmosphere about the place. I was at the pier one day while I was there and saw lots of seagull walking, flying and yelling loudly. This impression and image was printed in my mind. So when I started to decide what I wanted to do for the exhibition, the film “The Birds” by Hitchcock appeared in my mind and after I studied the history and all other background materials such as the history of Finland, the darkness in winter, the school shooting, etc., I was quite clear that the work would be something related to the fear of the unknown, the threat from nature, other nations, the judgment day, etc.

This is how I came up with the idea of the work, “HE Comes From The Sky … or The Sea …”. It is a text and sound installation made along a spiral staircase and basement at the museum. I wrote a text/poem to describe the work and also took some sounds of birds, horses, bears, etc, which in fact, all have different symbolic meanings, from different sources.

The white porn paintings are not merely depicting sex scenes. It’s more about the relationship between innocent and dirty, the hidden desire of people, wildness of our desire, etc. The color “white” is usually interpreted as pure and innocent, and when people talk about sex or pornography, we often think that it is dirty, but I think there is no absolute meaning behind the idea of “pure”, “innocent” and “dirty”. In fact, they are just some interpretations. In other ways, sex, pornography and desire are something related to our basic instinct that everyone has. In other aspects, the works also made some reference to Nietzsche’s idea on Dionysian and Apollonian and Freud’s idea about sex and consciousness.

Having traveling to various cities for different shows, which is your favorite one and why?

I have traveled to cities through Europe, Asia and the United States. In fact, I don’t have one particular city that I really like. I think every city has its good sides and bad sides. For example, I like London, Paris and New York as there are lots of exhibitions, concerts, festivals, etc. but unfortunately at the same time they are very crowded and noisy. I also like some smaller cities such as The Hague in Netherlands, where I can go to the forest and lake to have a walk and could have a good sleep there. It’s much quiet compared to other big cities like Amsterdam.

So what does the future hold for you and your career?

I often want to try something different to see how can I push my works further. At the moment, I’m getting more interest in using sound and light to create a certain kind of atmosphere in my works. I’m also thinking about making something related to moving images/texts, so probably, I’ll try to combine all elements together. These are some ideas that I have right now. Besides, I want to explore the possibilities of using different material in talking about the relationship between visible and invisible.