The streets of Brooklyn recently brought me to Los Angeles for the first time since 1991, that is, a group show called “From the Streets of Brooklyn,” curated by Bushwick’s own Ad Hoc Art gallery and hosted by Silverlake’s Thinkspace Gallery. The brainchild of Ad Hoc’s Andrew Michael Ford and Thinkspace’s Andrew Hosner, the exhibition is unique in that it presents a comprehensive overview of the best currently-active, Brooklyn-based street artists and graffiti writers. 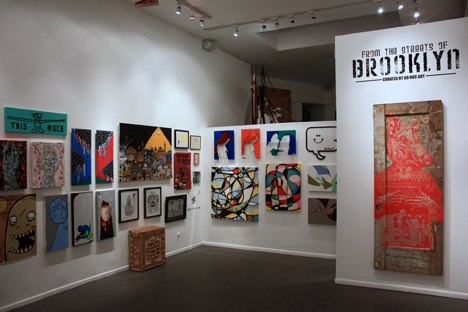 Approaching the streets of LA with virgin eyes, I was curious to find out what, if any, differences there were with the street scene in New York. It should come as no great surprise that the character of any given city has an impact on the work being done on the street. While the pedestrian is king in New York, it’s definitely the automobile in Los Angeles. “The fact that NY/Brooklyn is more condensed and seems to have focused areas where work flourishes definitely helps,” Andrew Hosner explained to me. “ LA gives new meaning to the term urban sprawl. It is just so spread out, that it’s hard to really make an impact here in the same way one can by focusing on the streets of Brooklyn.” 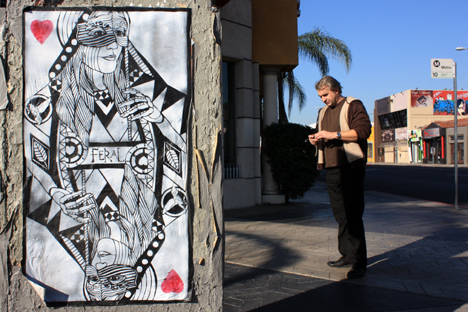 The necessity of the car, I think, completely changes one’s relationship with the streets; viewed at 50mph, impressions are fleeting and transient. In order to be noticed, pieces on the street have to be bigger, simpler, visually bold and, most importantly, visible from the car. The traffic control boxes at every intersection are favored spots – especially for wheatpasted posters – at eye level for any idling motorist whose glance strays from the road. Billboards are also prime real estate, hit up by anyone who relishes the thrill of the climb. Some of the best graffiti I saw was tucked away in back alleyways, sandwiched between dumpsters and abandoned furniture. The pieces to which I was led (with the help of the affable and knowledgeable LA street documentarian Lord Jim) seemed few and far between, scattershot among neighborhoods across the city. What became very evident to me after a few days of driving around LA was that it is visibly cleaner than New York. The buff – the city cleaning crews responsible for removal of graffiti and street art – are vigilant, leaving fresh coats of grey or beige paint in their wake. A piece I saw down the block from Thinkspace the night I arrived was already gone by the following afternoon… the life cycle of a street piece in LA is noticeably shorter than its New York counterpart, calling for all the more finesse in placement and an added bit of luck to survive. 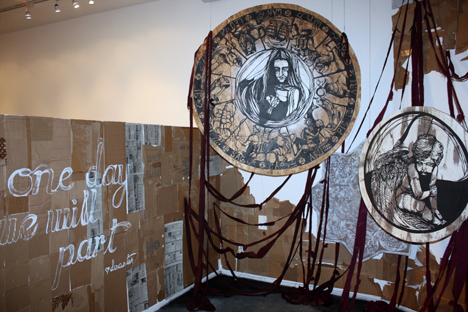 What “From the Streets of Brooklyn” set out to do was show LA how we do things in Brooklyn: every which way and loose. Curator Andrew Michael Ford assembled an impressively diverse roster of talent, tapping Imminent Disaster and Gaia, with collaborative partner Rachel Lowing, to create special installations for Thinkspace’s entryway and project room. The elusive shadow painter Ellis G left his marks in chalk, outlining fire hydrants, benches, and lampposts in the vicinity of the gallery. Full disclosure: I was invited to show my photographs of the participating artists’ work in the context of the street, displayed in their natural habitat as it were. The main gallery space was hung floor to ceiling with artwork from such diverse outfits as the Endless Love Crew, GRL, Destroy & Rebuild and Robots Will Kill. Stalwarts of the Brooklyn street scene such as Faile, Swoon, Skewville, Dan Witz and Michael De Feo to name just a few were also represented. Prolific and well-respected writers such as Kuma and UFO rounded out the selection. If you’re in LA, take a drive out to Silverlake soon, as this exhibition is only on view until February 6th.