“My name is Federico Urdaneta.” 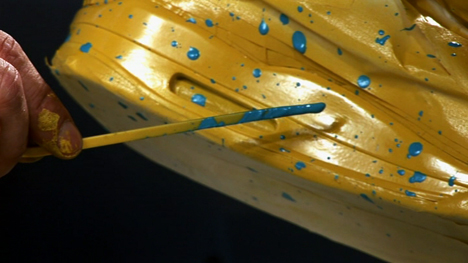 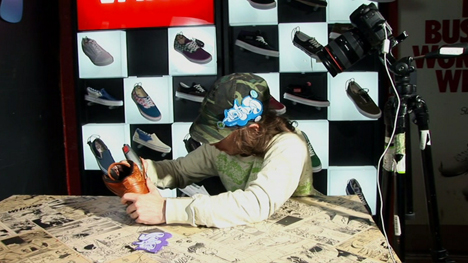 “I went to a college in Colombia for comparative literature, something that was not so related to what I did for a living in the beginning. After graduating, I decided to move to Big Apple (New York), where I went to Parsons and did a Master degree in Design and Technology. I specialized in audio-visual installation work in there. During all this time, I went back and forth between DJ-ing and playing guitar in different bands with my friends. When I was in New York, a teacher of mine (Zach Lieberman) recommended me to travel to Italy to work in this place called Fabrica. I packed my things and worked there for over a year, doing installations and music, and DJ-ing with my friends all over the northern part of Italy.”

Do the opening lines sound familiar? Like one of our new acquaintances?

Who actually he is? His name is Federico Urdaneta – a Colombian-born interactive artist, graphic designer and musician, who is currently in London freelancing for different production studios and has worked on exhibitions and client projects such as Benetton, MTV, Coca-cola, Samsung and Toshiba, etc. His recent work is Fashion v Sport, commissioned by Victoria & Albert Museum, UK.

What makes you decided to specialize in audio-visual installation works?

I was very much interested in creating systems that allow others to create beautiful sounds in a confined space. At the time I was infatuated by the idea of not composing, but creating an environment where others would compose or at least play with music.

Over time, I realized that focusing in such creations was kind of a cop-out, an easy way out of actually taking the time to compose music. Sometimes it is easier to build an instrument than to compose a song.

What was your first project?

A short story that I wrote when I was five. I feel like after leaving my literature studies, I drifted away from narrative work, and recently, through film and music works I am starting to return to where it was all started to the good old honest telling of a story, or the composing of a song.

It is all connected, isn’t it?

It definitely is, but I guess we spend some years just learning the tools of the trade (which today = computers and software) and in those years, it makes sense to focus on building systems and instruments in order to craft your skill. Only later, we use the tools to begin – in order to say something. So I guess that was in reply to “it’s all connected” – music and film, the whole audiovisual mess of it. I just can’t stop doing either one of them – at least, not now.

How do you begin with when given a new project brief?

It depends on the project. For most sound installations, I am working as part of a team. We would just talk and talk for hours until something that resembles a decent idea would pop up – most of these projects, we would pencil some rough ideas and then translate them into 3d model sketches.

As a part of such a team, my responsibility is usually the acoustic, sonic qualities of the installation, as well as some of the interaction design…

I have always been a big fan of “real” (i.e. not digitally produced) sound, so I try to get some sort of mechanical system in place to generate sounds like using motors to strike different surfaces to generate different timbres and tones.

I was lucky to be in Fabrica when doing these kinds of projects because they have pretty decent budgets (when they think that you deserve it) and you have a lot of rooms and space to experiment, to mess things up and start over again… For the Pompidou exhibition, they actually built a 1:1 replica of the centre’s basement in a warehouse owned by Benetton so we could get a real “feel” of the space, which is insane… 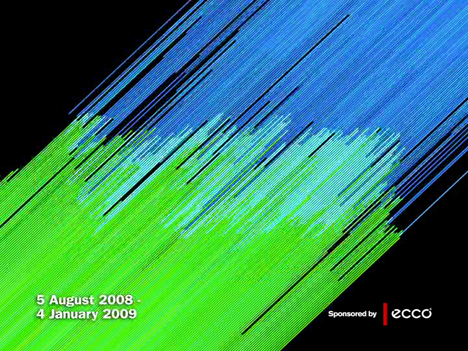 Which is your favourite?

Well, of sound installations, it would have to be the tuned stairs, just because it worked so well and the people loved it, and it was in Paris.

Of the films and videos, it would have to be my recent commission for Victoria and Albert Museum. 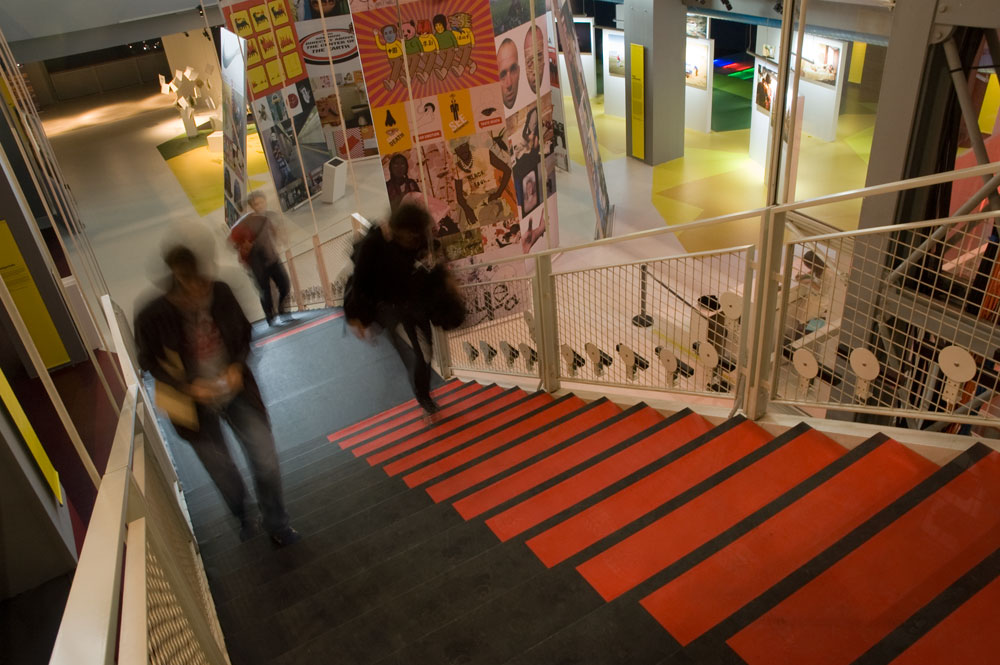 What have you brought into these projects?

The tuned stairs was a fantastic teamwork effort. I got the chance to collaborate and live with some great guys for a couple of months in Paris. We all had our roles, but in the end we also did everything together.

The film work is a more personal effort, where I was the director of the final output although, of course, you never truly work alone. My girlfriend, Maja Flink who is a very good photographer helped me out with the production. I guess the challenge is doing something that you can be proud of. 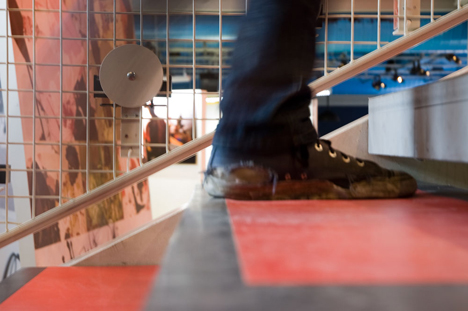 How many of you were in the tuned stairs?

It was Carlo Zoratti, Daniel Hirschmann, Hansi Raber, Andy Cameron and myself. Five of us. 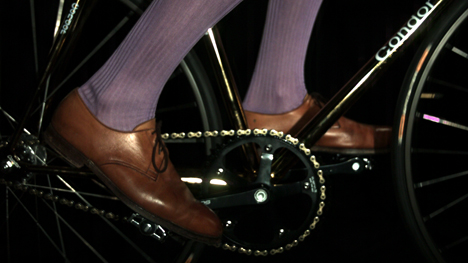 Well, it was great working with them. The curator, Ligaya Salazar, and the producer, Louise Shannon, pretty much gave me, not complete, but semi-complete freedom to do the work. They had an idea and needed it to be represented in a moving image medium so they came to me and asked to just make it happen.

I also worked with Nadine Fleischer in doing an animation for the front doors of the exhibition. And again, it is great to work with the backing (financial and otherwise) for such a big, respected place, you know? 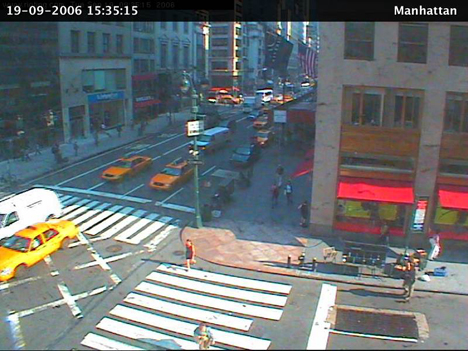 Anything that you have not done that you’d like to do?

I love mechanical sounds, so I love David Byrne’s last installation work. I forget the name, but it is the one he did recently in New York (and I think he has done it in some other cities) where he plugs in a piano / organ type instrument to a bunch of motors that makes a space (house, warehouse, whatever) into an instrument.

I feel that kind of project is open ended by nature, like music so the fact that Mr Byrne had already done it, does not close the door for new variations on the idea. I mean its been done before, by many people before but I still find it interesting!

How do you get inspired?

I just sit down and make music. And then listen to what I have made and work around those first steps. For me, inspiration happens in the act.

Is there any insulation of your own identity into the music?

I think that is a bit out my control. Such an identity is not a conscious value added. It’s just the only way I know how to make music but I guess sound itself is abstract. It is nature in the abstract – the least representative of the arts!

Music is mimicking nothing! Music is difficult to verbalize, that’s what I like about it, which is why it is tricky to make it for commercial purposes.

But to answer your question, in a way there isn’t since I kind of have a distinctive style of music. When I get a commercial gig, it is kind of understood that I am being hired BECAUSE of my style but after the initial brushes of “style”, there are definitely many formal and technical constraints that are not present in an artistic endeavour.

How about making music/sound for commercial use and installation works?

Designing sound for an installation is usually about creating a system, an instrument, which will be played by others. Your aesthetic decisions control the characteristics and limitations of the instrument, but the performance is not yours. You do your best to ensure an aesthetically pleasing experience in creating the instrument.

Commercial work is usually songs, the finished product set in stone although the Samsung soundscape project could be in-between both. I would still not call it an instrument, but more of an enhanced play list, loop system.

Tell us about your next project.

I am going to do a short film probably either about ping pong or street dogs.

Why ping pong or street dogs?

I love ping pong visually, I love the hypnotic sense of rhythm in it.

I have always been very impressed by the lack of street dogs in the first world. I would like to know where all these dogs are going or went.

Have you followed them before?

Were you brought up in Colombia?

Does your childhood determine your path that you are leading now?

I won’t say there is one in particular. I was brought up in a very open, and arts-oriented environment. it was a very good childhood.

Your parents are into arts too?

They are, even though they don’t really work in it

They love music more than everything!!!