Yoshihide Otomo, who has been around all over in the fields such as free jazz, impromptu live session, noise music, modern music, electronic music, film soundtrack. His exhibit “ENSEMBLES” which opened at Yamaguchi Center for Arts and Media (YCAM) on July 5th is showing his diversities with four different installations that consists of three latest works in addition to the one on view at Sendai Mediatheque last January. Here is a talk by Yoshihide Otomo who has composed sounds collaborating with a myriad of artists here and there. 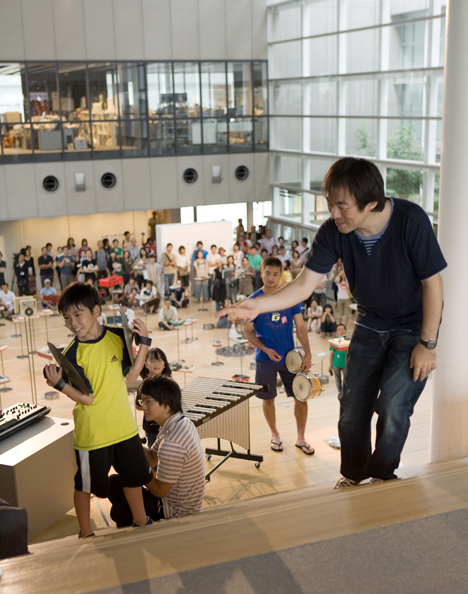 Tell us about your background and history.

It is hard for me to recognize my own background since I have been this music world more than 30 years. However, I dare to say that my root would be musics and comedies from TV, film, and radio in my childhood in 60’s. Many of them are so-called “Kayoukyoku” in Japan, which is described as peculiar Japanese pop music in 20th century. You can see the music that jumbled up powerfully and exquisitely sometimes even insensitively. Absorbing various kinds like American pops, Latin music, Russian folk, Hawaiian, Chinese music, etc.. They struck my unarmed innocent feelings. Still now, I get so excited to see a picture of Crazy Cats, which was one of major comedy music bands in those days.

Another factor will be Japanese free jazz and noise music. They started to spread in underground scene from 60’s and 70’s. And also a free improvisation in Europe. It left big impacts on me after my adolescence. No exaggeration to say that improvisation and noise musics have completely changed my life. Kayoukyoku, noise, and improvisation, without doubt, they are my parents.

Talking about my history, this space seems too small for that, however, I have been consistently active in music world and film music in past 20 years. People generally classify them into experimental music or avant-garde field, sometimes into jazz. But I have no attention to specific genre. I am just attracted by each music in terms of different dictions. Each music contributes to create a world of plenty in each different way, I believe. In a word, entirely back and forth between a live performance and a recording session traveling all over the world for 20 years, that is my history.

You cover a host of fields like free jazz, impromptu live session, noise music, modern music, electronic music, film soundtrack, and etc. How did you start it?

I don’t classify the music as I mentioned. A matter of language sometimes reflects an organic part of itself, only they don’t deny one another. They shouldn’t, I guess. It is repulsive to see the tone that only bringing up a brilliant side of certain style and unfavorable to others. My pure motivation is just profound thirst for knowledge.

Another essential key is the fact that nothing can be done by myself. It turned out to be like this after much considerations of how to meet incentive people and what I can do with them. I don’t know why but I am poor at working with certain people sharing only their own sense of value, therefore, I just put myself getting about after all. This is the sincerest way for me, I think. Although I sometimes encounter a negative reaction.

Tell us about your design and working process for on-going exhibit “ENSEMBLES” at Yamaguchi Center for Arts and Media (YCAM).

Again, there are too many things to tell in this section. It has been 5 years since a curator, Mr.Kazunao Abe asked me for exhibiting something as we met for the first time. First I was uncertain of my own installation. It took me 3 years to make up my mind around the time of helping Mr.Norimizu Ameya’s show. This time, I received a strong offer from Mr.Abe. I really appreciate that he was offering somebody like me who didn’t have a particular achievement in this exhibition field. Otherwise, I won’t be able to be here today.

But now to my exhibit contents. Fist thing came up in my mind was about “music” for somebody who spent a plenty of time especially in an improvising field. That was my first step. Then I came up with a concept “ENSEMBLES”. It means that not making alone but together with others to create alike composing a band. My part is similar to a bandmaster working with an arranger, a bassist, a singer… I wondered if I could apply this structure for the show. That is how it is.

With the immeasurable cooperation of musicians including Yasutomo Aoyama, Yuki Kimura, Norimichi Hirakawa, Benedict Drew, Sachiko M, Tadasu Takamine as well as great YCAM technicians and sincere support from volunteers and YCAM staffs, also a Yamaguchi based artisit, Yoshimitsu Ichiraku, who gave me an opportunity to meet YCAM. I was able to achieve composing this cool big band.

It looked as if we were in the scene of the fire or the festival during the preparation vibrant with life every day. Those people brought their ideas and skills fulfilling their roles based on my original concept so that we were able to create works with super high quality which turned out something more than we expected. It was an impressive moment to be there and witnessed a great band being built.
I know my name is on it, however, actually this is a work by “ENSEMBLES” which is a huge band that consists of 300 people, you know. 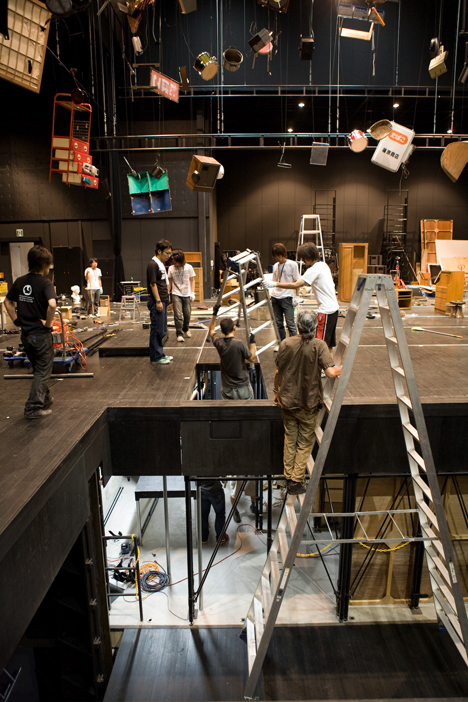 What is included in the title “ENSEMBLES”?

When a musician exhibits his work, the best method for him to bring along with himself is the ensemble for making a music as I mentioned in my previous answer. In my opinion, people are lately losing their ability for an ensemble performance… things are coming to a crisis, I guess. We used to play music together while it has been changed to something made in laptop computer and listened through earphones which shakes your eardrum directly. I see a music becoming some personal belongings in the flesh. I want to check the flow of that even it will get in vain. The music shouldn’t be like that… this is my unaffected sentiment.

An ensemble… this keyword is not only a method of producing but it also means of how you accept and build your surrounding society. In that case, this title gives me a big theme for not only this show but also for my future I am going to face.

What are the highlights of your four installations?

I want you to spend at least one hour for each work. There is no same moments during all of the show. 10 or 20 minutes are not enough to grasp the whole picture. Please enjoy the show with relaxed leisurely as if you were in a concert. It is your moment that nobody has never seen. The more time is the more sounds you can discover and enjoy. 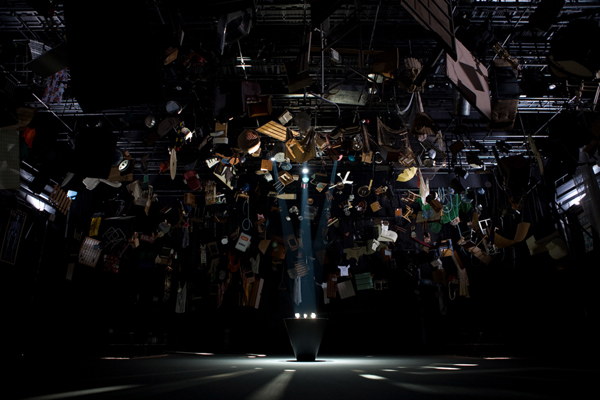 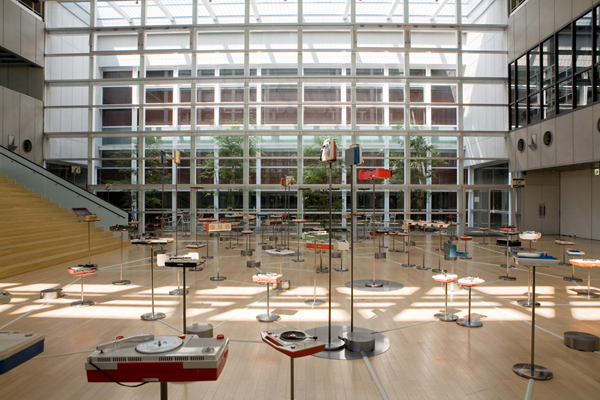 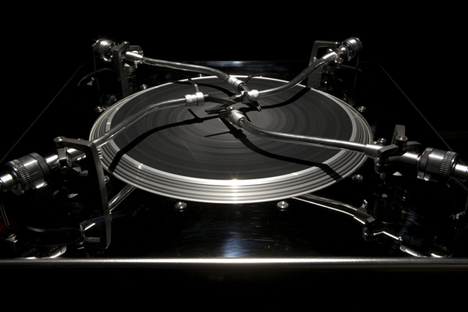 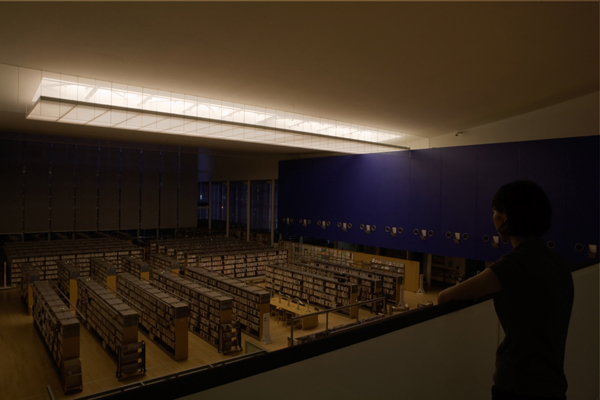 There are musicians, sound creators, and visual artists in various genre. How this collaboration began?

Some are introduced by YMCA, others I have met at work and asked to join. In either event, by a curious coincidence and by sixth sense after all. Talk to anybody who appeals to the gut. It is very similar to the situation you meet your partner, I think. 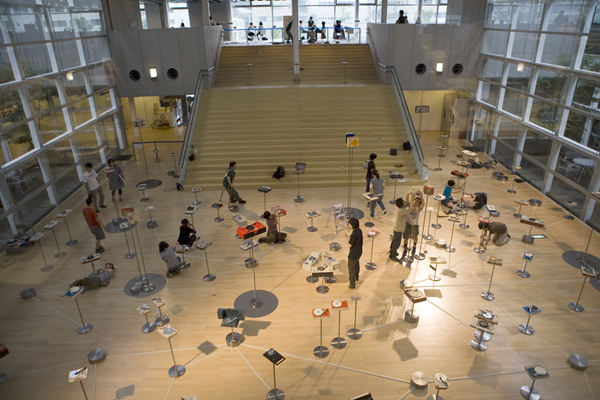 Tell us about a workshop and a live performance. What is the feedback from the participants?

The good thing about the workshop is to be able to work with non-professional people I have never seen. Professional people including myself usually have lost something as they learned a lot at the same time. On the other hand, non-professional people generally still have a variety of potential. It is a fun for me to draw them out as well as their audacious participations bring a pregnant imagination after all. Truly I’ve been helped a lot by them this time. Especially in “without records” and “orchestras”, I couldn’t achieve a success of these shows without their participations. How much those pupils contributed to our success in a live performance. 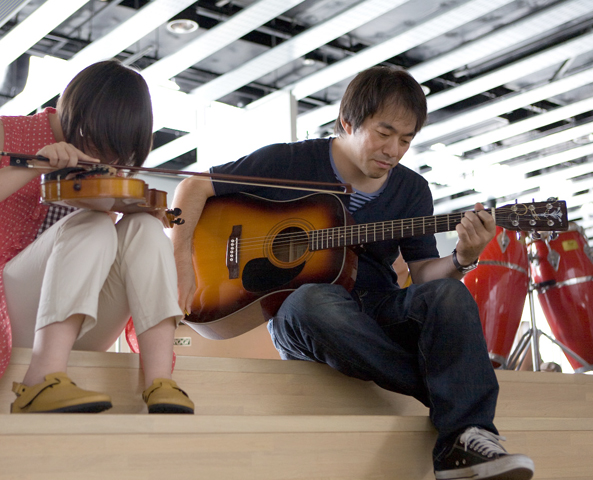 Talking about a live performance, it is my daily event and a part of my life. But those having a live performance in an exhibit and playing with somebody I didn’t know, these two unusual essences remind me a big potentiality for the future.

I hunch that it would be a great idea to apply the ensemble concept which I learned form this exhibit for my music live performance. I wish to do ENSEMBLES live version with people in Yamaguchi communities. This is my latest propose for Mr.Kazunao Abe of YCAM.

What is your schedule and challenge next?

I am so into a concept of ensemble after this experience at the show. My mind is almost boiling because of that. (laugh) My biggest interest is to develop a method of ensemble including the exhibit work I applied for at YCAM this time.

Somehow I’m giving a harangue or something, but I would devote whole my life that may last 20 or 30 years to work on this… To my shame, I am just so excited about nothing but this.