As known for its master-design by Isamu Noguchi, Moerenuma Park in Sapporo, a capital of Hokkaido, was planed as a “park that is considered to be one complete sculpture”. Being focused their attention on its simple yet dynamic park’s grand open in 1995, people all around the world, however, should learn not only its design but also the effort to concern for the environment. I like to introduce some of their approach to it. 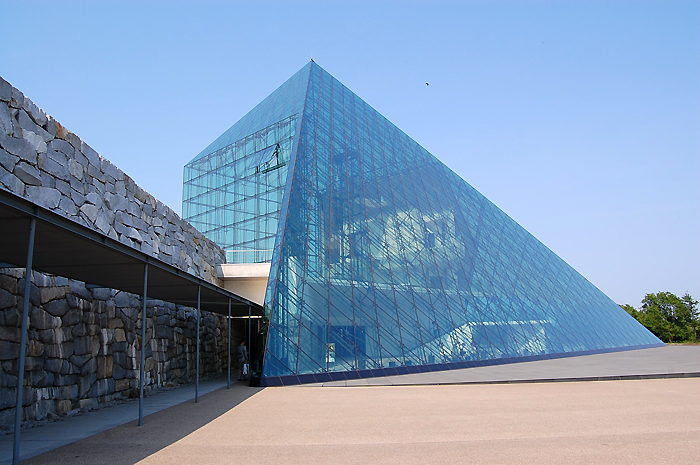 As is generally known, Isamu Noguchi, a world famous sculptor, designs the master plan of Moerenuma Park. But it’s a little known fact that Moerenuma Park was constructed on the waste landfill, which was started in 1979 to plan for the core park under the “Circular Greenbelt Concept”, which aims to shape a green networking areas around the center of Sapporo. Taking 26 years and using 2.7 million tons of trash to complete developing land, the broad site of the park has finally consisted of facilities including gloves, play equipments, a beach, mountains, a fountain and a pyramid, in which has been put Isamu Noguchi’s enthusiasm.

Among those facilities, “Glass Pyramid – HIDAMARI” is a highly conspicuous facility in its presence and is playing an important part in forming the whole park as a symbol of Moerenuma Park. “HIDAMARI” means “suntrap” in Japanese, so that you can easily imagine inside of the atrium is very warm because of its entirely covered glass, which lets sunlight into the atrium. In winter HIDAMARI literally becomes a suntrap while outside of the building is covered in snow. How about in summer? Even Hokkaido is located in up north in Japan, it will be blazing hot summer and the atrium gets hot inside like a greenhouse. So what comes next is a “snow air conditioning system”, which will keep the temperature comfortable in the glass pyramid. 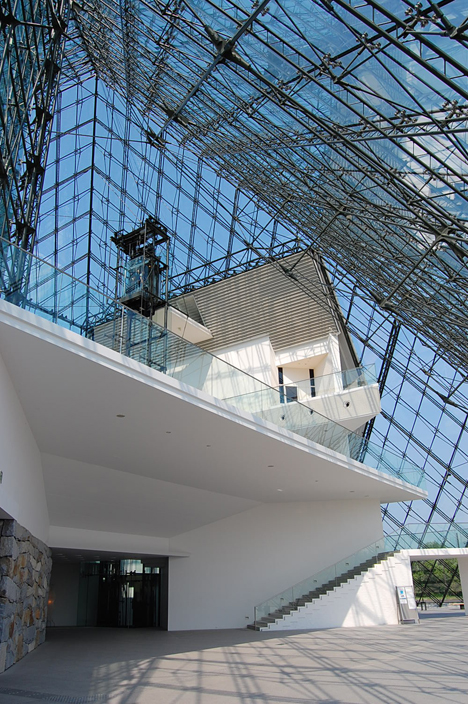 Every March at Moerenuma Park, snow on the parking lot and park road is carried into the snow storage all at once. The storage is 3000m3 capacity. Inside the storage melted snow becomes cool water, which is then circulated through a heat exchanger to distribute cool air from the air ventilation in each room. Meanwhile, warm air in each room is circulated back through the exchanger becoming warm water, which melts snow down to producing cool water. This circulation system is utilized for the “snow air conditioning system” in the park. 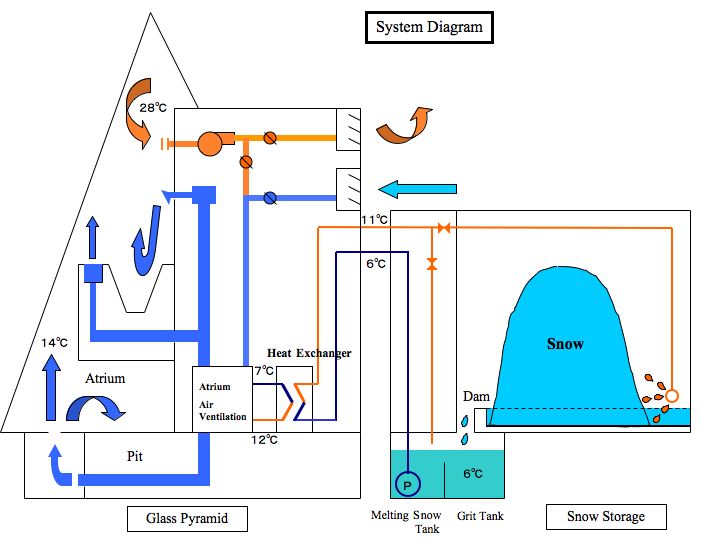 “Snow air conditioning system” is effective in reducing CO2 for the prevention of global warming. Using electricity and fossil fuel energy such as gas and oil operates the most commonly utilized cooling system, which cause CO2 generation. The snow air conditioning system, on the other hand, uses cool water from melted snow, so that there is no need for energy to cool, which means no CO2 generation at all.