What would come to your mind when you hear the name of the city Berlin? It might includes Berlin Wall, the separation of East and West, the collapse of the wall, the progression afterwards, architectural buildings by prominent architects, and the city gathering many artists. Berlin is the place where various people started doing various things, and also the place still growing as you can feel. However, it is still rare case that you firstly say “city of design” about Berlin, which is the one named by UNESCO in 2005. It is still hard to think of the design from Berlin, comparing to the number of galleries you see everywhere in the city. 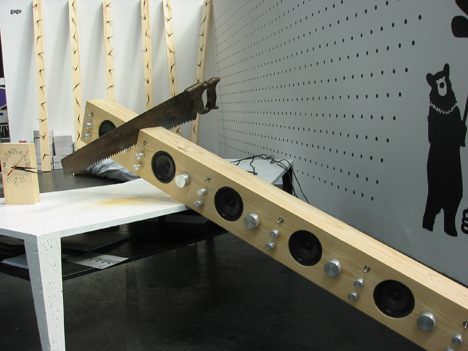 In such Berlin, 6th DMY (Design Mai Youngsters) was held for five days from May 21st to 25th. This event was originally a part of DM (Design Mai) which was started in 2003, and its scale became bigger after being independent. While DM passed on this year’s festival, DMY’s main venue “arena” presented more than 150 works of designers and creative directors, and hosted symposiums and live shows. DMY also featured about 33 other places in the city of Berlin. There was a shuttle bus service to go around those venues on 22nd, for the non-local visitors or lazier people to go around by themselves. 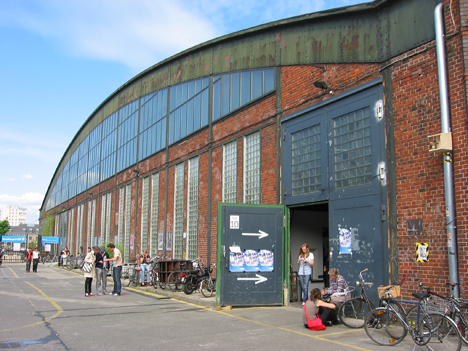 The main venue, “arena” was a huge storage with 7000 square meters built by a transport company in 1927. It was one of the biggest halls without columns in Europe of that time, located by the big port for inland transportation by the Spree river, and that 240 buses could park.

It was grandstand place and completely took my breath away after I passed the entrance table, which represented the the check-in counter of an air port. Since it was the high-ceilinged, we could go around to see the lamps and the furniture like tables and shelves without feeling of pressure. 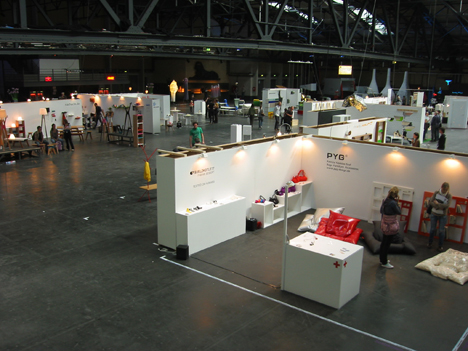 There were lots of wooden furniture. Some were ready-to-assemble, which I couldn’t help thinking that it must be useful in moving. Some were flexible to the various user’s situations, and some were to use the wall. I also noticed the combination designs of more than 2 furniture such as container and table, lamp and table, shelf and table, etc. 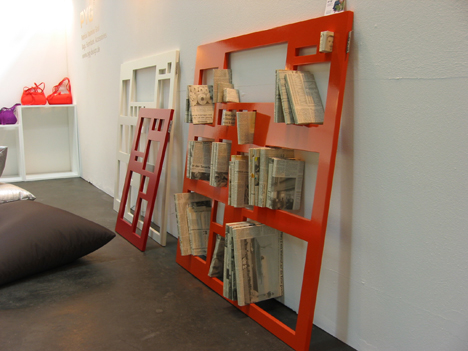 The book shelf by PYG (Patricia Yasmine Graf) was to set against the wall. It was supported by the weight of books put in the square holes in various sizes. The design consisting as a book shelf without shelf boards was new.