Which are the October Salon Awards?

There are three equal prizes (2500 €) awarded by the international jury of five members and a special prize awarded by the Belgrade Cultural Centre, which consists of a solo exhibition to be organized within our Centre.

Are you inviting specific artists to participate or can anybody apply for participation?

Can you tell us something about the forthcoming 2008 edition?

The Art director for the coming 49th edition of the Salon is Bojana Pejic, Serbian curator, living and working in Berlin. Under the title “Artist Citizen” this year’s exhibition will present those artistic practices that have been called art-in-context.

“The title of the exhibition, therefore, does not suggest the topic of the exhibition, for the works featured in it deal with a great number of topics; the title of the exhibition should suggest that we shall encounter artists who position themselves critically – I would say, politically – towards the “given reality”, the given context: these are artists who bring into question the politics of representation, the relations of power, re-examine artistic and political institutions, as well as their own artistic production…” – says Bojana Pejic

Serbia has recently experienced a political transformation. How do you evaluate this new political scenario in relation to the October Salon?

At this very moment Serbia is experiencing very delicate and difficult political situation and we are again the breaking news, and front pages headlines. We are all working under big pressure and we hope that together with artists we’ll be able to create one serious but still very communicative and good humored exhibition.

How do you see Belgrade evolving in the next years? Do you think it has the potential to become an artistic and cultural capital as it happened with Paris, London or Berlin?

Belgrade is a big city (around 2 million people). It has very active and interesting art scene and therefore has a big potential to become an important regional art center.

What would you tell to potential visitors and participants about the October Salon and Belgrade?

Leave all you prejudice at home.

How do you evaluate the Serbian art scene and its international presence today?

I think that our art scene is not recognized as it should be. And therefore our priority is to promote it, to make it visible…

About Bojana Pejic, selected art director for the 49th October Salon in 2008:

Born in Belgrade in 1948 and studied History of Art at the Faculty of Philosophy in the University of Belgrade. From 1977 to 1991 she was curator at the Student Cultural Center of Belgrade University and organized many exhibitions of Yugoslav and international art . Started to write art criticism in 1971 and was editor of art theory journal Moment, Belgrade (1984 – 1991) 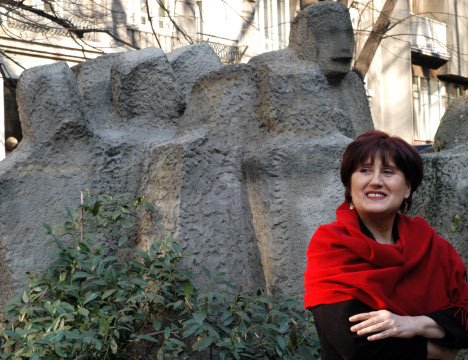 Since 1991 she has lived in Berlin. She organized an international symposium The Body in Communism at the Literaturhaus – Berlin in 1995. She was Chief curator of the exhibition After the Wall – Art and Culture in post-Communist Europe organized by theModerna Museet , Stockholm, (1999), which was also presented at the Museum of Contemporary Art – Foundation Ludwig, Budapest (2000) and at HamburgerBahnhof , Berlin (2000-2001). She was one of the co-curators of the exhibition Aspects/Positions held in the Museum of Contemporary Art – Foundation Ludwig, Vienna in 1999.

Between 2002 and 2004, she was one of international advisers of the Contemporary Art Museum in Kumamoto (Japan) where she also curated a retrospective of Marina Abramovic (2003), which also toured to Morigame (Japan). In 2003, she had the Rudolf Arnheim guest professorship at the Humboldt University in Berlin (history of art). She was adviser of the project “De/Construction of Monument “organized by the Center for Contemporary Art in Sarajevo where she also held seminars at the Academy of Fine Arts dedicated to the “Communist Body.” (2004-2005)

In May 2005 she has defended her Ph.D. “The Communist Body – An Archeology of Images: Politics of Representation and Spatialization of Power the SFR Yugoslavia (1945 -1991)” (in preparation for publishing). She was a Maria Goeppert-Mayer guest professor for International Gender Research at the Institute for Cultural Studies at the University in Oldenburg (2006-2007).

The October Salon is a very good organized and attractive art event which is distributed within different locations in Belgrade. It offers a great selection of artwork and is the perfect occasion for visiting an emerging and very interesting city that reveals its history through its architecture, and offers good gastronomy and nightlife.