The Exhibition of the Francois Pinault Collection was held in France where it seemed that everyone have a slight disdain for the man. Francois Pinault is a billionaire French businessman and owns the PPR Group, which has Gucci under its umbrella, as well as Christie’s, which is the most dominant auction house along with Sotheby’s, Pinault is said to be the number one private art collector in the world today and in fact, he has been selected as “the most influential figure in the contemporary art” two years in a row, in 2006 and in 2007. 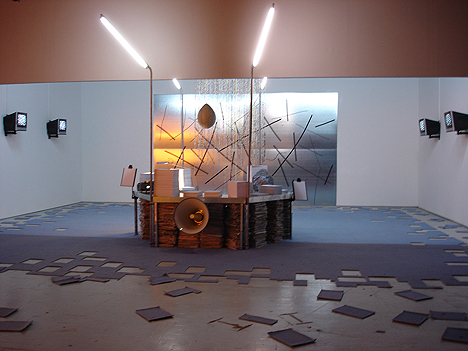 I mentioned above that everyone had a slight despair for Pinault in France, and the reason why was that Pinault famously turned down an architectural project on an old Renault factory site on Île Seguin, an island near Paris, in 2005 for Pinault’s Foundation designed by Tadao Ando to exhibit and store his more-than-2000-piece art collection. This was due to the delay in administrative procedures by the French Government which pushed back the initial completion date of 2007 to 2010. Pinault just could not wait any longer. Several months after the cancellation of the project, Pinault bought Palazzo Grassi in Venice, Italy, and re-opened it as an art museum. France had to face the fact that it had just lost one of its most important art foundations along with one of the world’s most famous art collections from its soil.

After all this, the city of Lille managed to invite the Pinault collection back to France. Since it was elected the European Capital of Culture in 2004, Lille has been especially putting energy towards lille 3000, a contemporary art exhibition while trying to discard its image as an industrial city .

This exhibition of the collection, “Passage du Temps” (Passage of Time), was curated by Caroline Bourgeois, one of the curators for the The Ile-de-France region FRAC-PLATEAU (Fond regional d’art Contemporain), who is also an art consultant for Pinault. The plan was to select the best works in photography and film media out of the up to 2000 works that Pinault owns, as well as to showcase them in a chronological order from the 70s until today in the art history.