Fluo is a young design collective from Berlin, Germany whose product collection strictly follows ideals of minimalism and purity in their production of textiles, various accessories and now, furniture. Formed by Sandra Thomsen and Ilke Penzlien in 2004 after their University studies, the duo has crossed boundaries of fashion and design by extending their products for use in interior design, fashion as well as daily life.

Fluo’s central concept is to make useful things precise; a hallmark of German design. By opting to use high quality materials, in natural tones, Fluo makes the functional into something pure and simple- and so their minimalism kindles an intrigue and while seemingly simple, captivates and demands a second glance. In sum, Fluo make simple design beautiful.

As it was their first time in Japan for 100% Design Tokyo, part of the Blickfang 2007 design trade show for interior, fashion and accessory, SHIFT took the opportunity to see some of Fluo’s products and meet with Sandra Thomsen during Tokyo Designer’s Week. 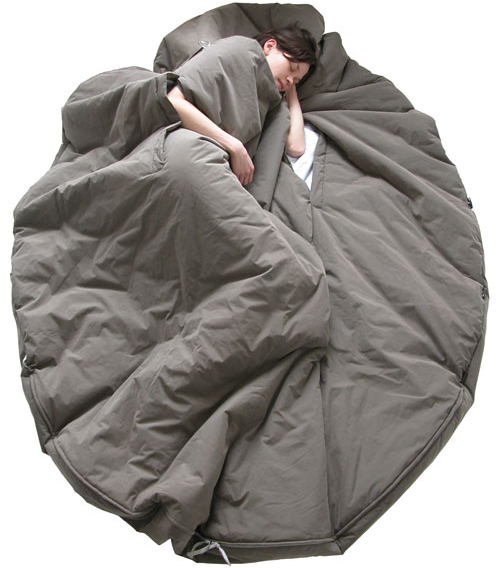 Lets start with the indoor sleeping bag, can you tell us about it?

Well, we finished it in 2003 and its been shown Milan as well as other shows, where it was met with interest. We’re using a material by 3M, Thinsulate, and cotton so its really durable and can be folded it into a practical and convenient size. This is our third prototype, and the indoor sleeping bag evolved around the human form.

Interesting, so where did the idea come from?

Well, when I was visiting friends in Berlin, I was based in Hamburg and every time I travelled, I used to bring a regular sleeping bag- it was uncomfortable and cumbersome, I just wanted more room to move around. It was so horrible to sleep in a small sleeping bag with no space so I had the idea of making a sleeping bag for indoors, not necessarily camping. It allows more movement that someone is used to, like sleeping in their bed, but has some portable as it is still a sleeping bag 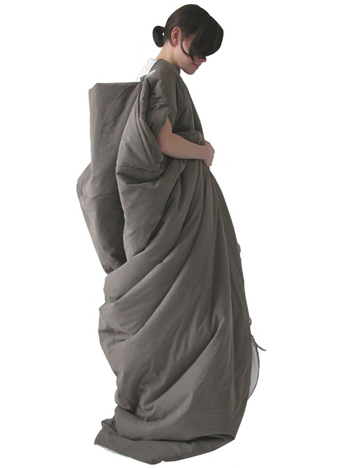 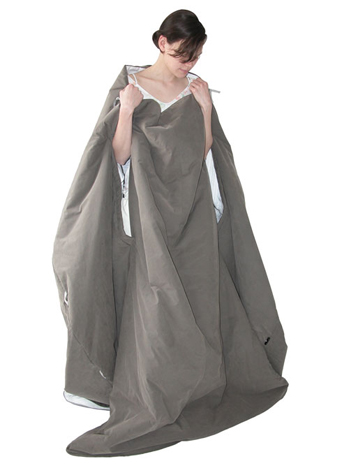 It looks so functional…

Right, you can open the zippers above, put your arms out through these slits and unzip the bottom to walk around, so if you’re sitting on the sofa and you want to get up for a tea, you can just get up and walk. If its cold, you can close the side with a toggle button. I also folds up into a shoulder bag so its easy to transport and take with you.

I automatically thought that this would really appeal to Japanese people as it is cozy and warm like Kotatsu, a continuous wrap cloth like a Kimono and almost like a wearable futon.

Earlier, an older man said it was perfectly suitable for Japanese people! We’ve had lots of positive comments from students as well; it meant a lot coming from an old man. Also, seeing the kimono was also part of the inspiration. Also, Japanese winters can be really cold, especially in the older houses and since a lot of time is spent on the floor, usually made of tatami mats, families sit and can be cozy, kind of like a Kotatsu.