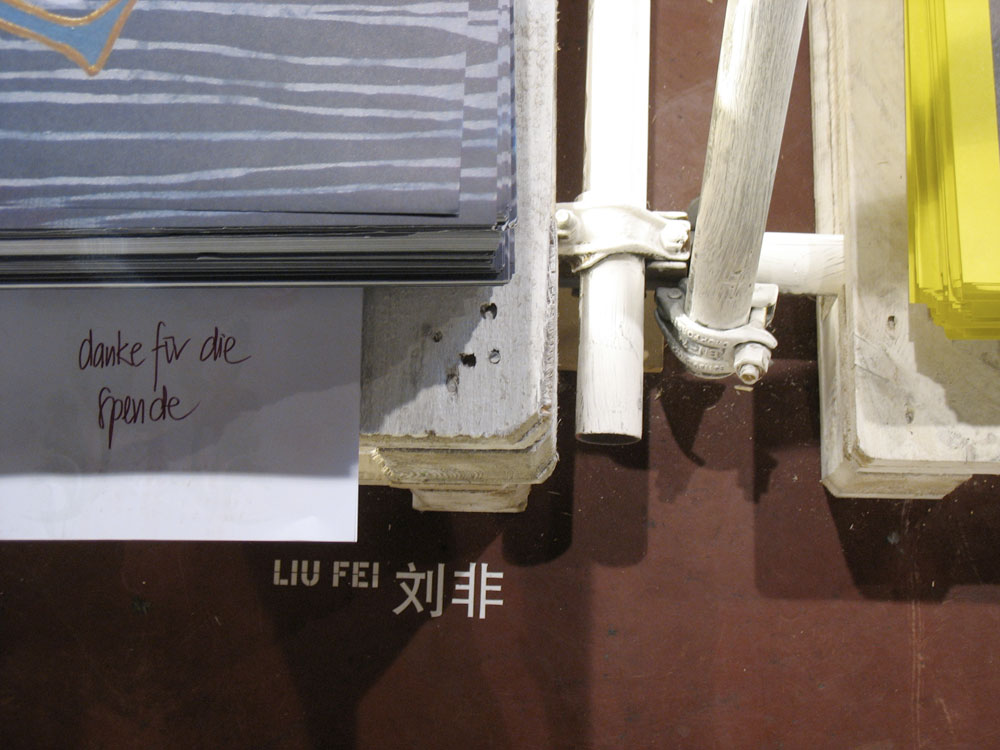 We pass by the “Alte Postfuhramt” and approach the side entrance to the “Rodeo Club”. We’re 3 hours early for the inauguration but the place is already open to the public and so we enter, climb up some stairs and pass a long corridor that’s lit by a dim red light. The rooms around the dome-hall by the main installation are wall papered with posters, reminiscent of last year’s exhibition that took place at Shanghai and thus was called “What makes Berlin addictive?“. 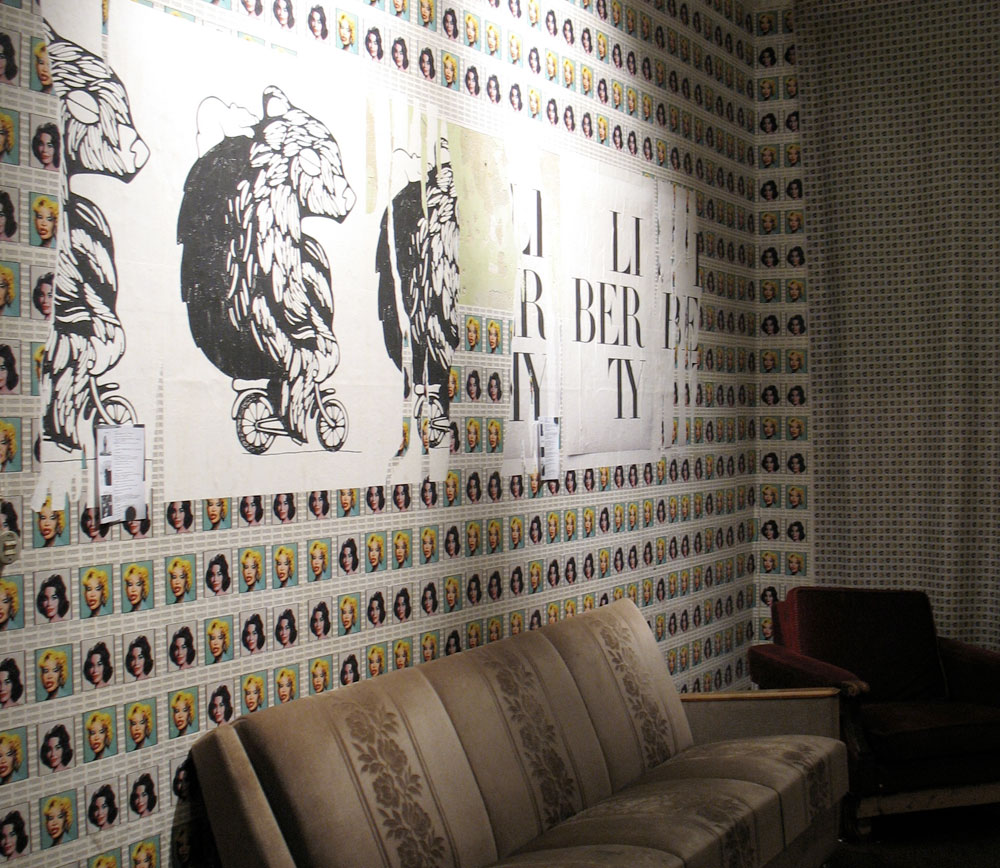 Torn and partly stripped off, these posters look as if they have remained here for at least a year. The whole place offers a very nostalgic scene, like an old, run-down theatre where an avant-garde play is taking place. The dome-hall is especially impressive, with its crude scaffold-construction designed by exhibition-architect Tilman Thuermer. Wooden pallets, illuminated from below, carry huge piles of posters that you can take away. On one wall questionnaires are pinned on wooden pallets. The artists have given statements to issues like “Shanghai First thing the city lacks” (“Starry nights”), “Favorite prejudice against visual designers” (“They dig themselves.”) or “Best advice you ever got?” Many answers here say: “No pain, no gain.” 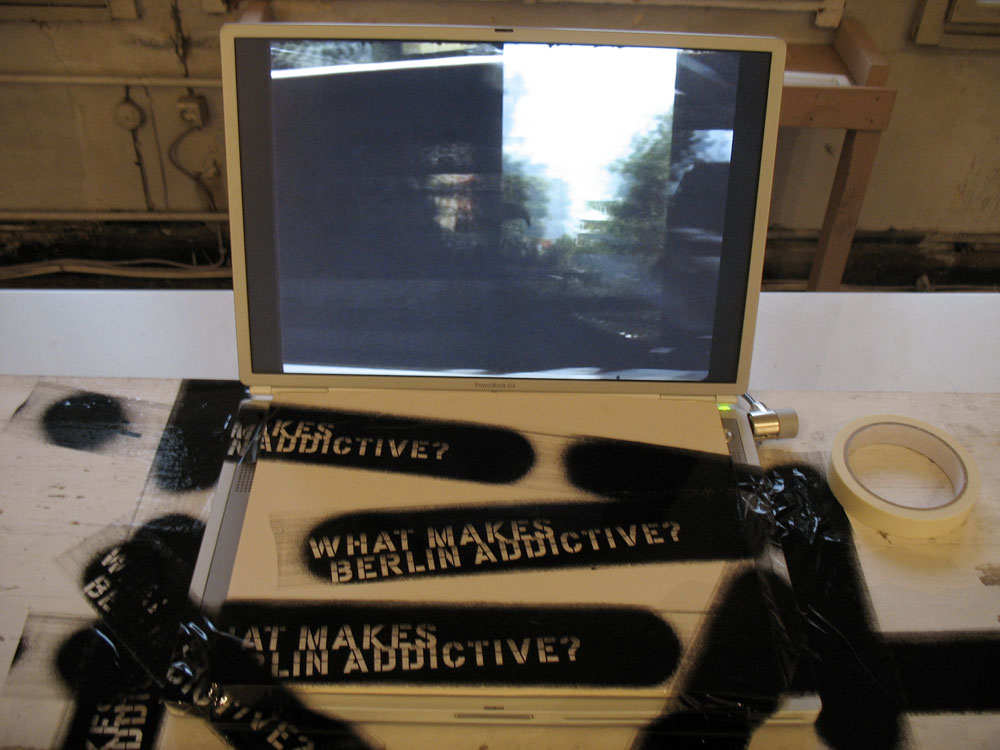 For the moment we’re the only ones getting posters but later that night crowds are climbing over the pallets and piles, discovering their favorite poster and waiting impatiently before it’s finally their turn to roll it up. 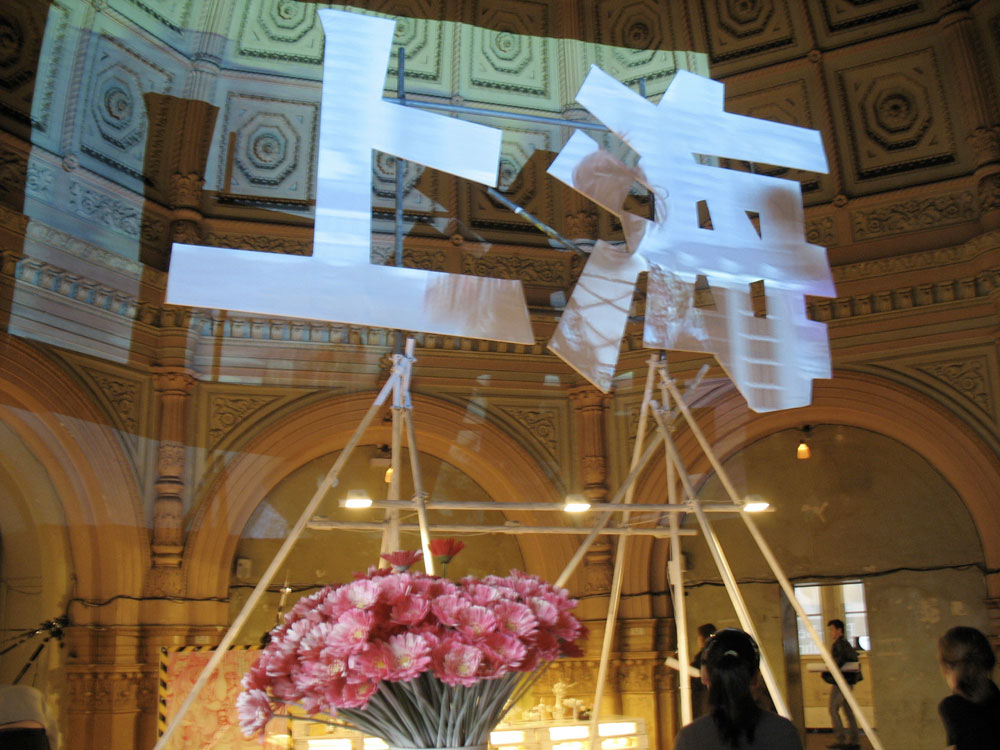 We get some drinks at the bar and sit down on one of the sofas, the best place on site. From here you can watch the staff finishing the last preparations (e.g. tying piggybanks to the pallets, so you can donate money) and you’ve also got a good view on the film that is projected on the two large Chinese letters (saying “Shanghai”) on top of the scaffold. Since it’s both relaxed and inspiring, we decide to stay and start calling some friends: “Hey, come over after work, it’s cool here and there are posters for free!”